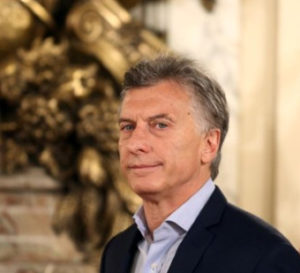 LONDON — “Everything” in Argentina is 20% to 30% overvalued, making a financial crisis inevitable, Daniel Lacalle, an economist and fund manager, told Business Insider.

A financial crisis has been building in Argentina for years but was hidden by an inflationary bubble which politicians refused to address because they wanted to “avoid the pain,” said Lacalle, chief economist at Tressis SV and a fund manager at Adriza International Opportunities.

“Argentina was an accident waiting to happen… Right now GDP [in Argentina] is a fabrication… a complete invention. Obviously the economy will shrink, but it shrinks to reality. It needs to face reality,” he said.

The Argentine peso has been struggling against an increasingly strong dollar. Two interest rate hikes in 24 hours failed to prevent the fall of the currency’s value and the country is seeking billions from the International Monetary Fund, according to reports.

“I had a meeting with an Argentine businessman the other day, a 57-year-old. He had seen four bank runs and seven different currencies”.

The news shocked Argentines who are still traumatized by the last IMF loan which coincided with austerity and the financial crisis in 2001 that caused social and economic chaos.

The next crisis could already be underway.

“The crisis is already happening. You have seen prices go through the roof, discontent, the economy is not growing as it was supposed to grow,” said Lacalle.

He added that the problems have been building for years but were disguised by a “massive bubble” which came from an “extreme inflow of cheap dollars” during the end of QE and helpful “tailwind” conditions. The tailwind has now reversed thanks to an increasingly strong dollar and the prospect of an interest rate rise from the US Federal Reserve.

The result is a crisis which interest rate rises have failed to stave off. It was disguised by politicians who wanted to “avoid the pain of facing the problems, so they tried to indebt their way out of it,” Lacalle said.

“If you’re in government who doesn’t like a real estate bubble or a massive inflow of capital. You basically put a medal on yourself and say the economy is booming because of you,” he said. “You know the economy is a disaster but you try to avoid the pain.”

“I had a meeting with an Argentine businessman the other day, a 57-year-old. He had seen four bank runs and seven different currencies…. The historical problem of Argentina is to disguise these crises.” Governments try to borrow “themselves out of the problem” and Argentines no longer trust their politicians with monetary policy.

Last year the government issued a 100-year-bond in an attempt to raise money, a move that Lacalle said was “lunacy.”

The economy needs a “clean up,” Lacalle said. “We always talk about the crisis… when the bubble bursts, which is a mistake because the crisis was already happening two years before.”

Lacalle is a Spanish economist, named among the 20 most influential economists in 2016 by Richtopia.