If there is a sign of the impact of financial repression on credit investors and the “search for yield” policy it is seeing that Argentina has issued a 100 year bond at 8.25%.

The $2.5bn issue was oversubscribed 3.5 times, which shows how credit investors are more than hungry for any kind of yield, as global negative yield bonds currently surpass the $9 trillion figure. With Europe and Japan giving negative nominal and real yields, and central banks buying a combined $200 bn a month of assets, there is not just real demand for some yield. It is phenomenal.

Argentina was able to make such a phenomenal issue because market perception of the new government is that of a serious one that tackles the imbalances and promotes growth, as opposed to the disastrous inflationary policies of Cristina Fernandez de Kirchner and her “economy” minister Axel Kiciloff. 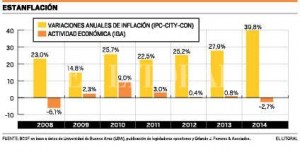 The graph above shows the atrocious stagflation created by massive money printing and spending.

The legacy of Cristina Fernández de Kirchner is, at best, a failure considering the wealth and potential of that great country that is Argentina.

Meanwhile, the private sector was drowned in taxes. Argentina had the highest tax burden in Latin America, intervention in prices, capital controls and lack of foreign reserves to pay suppliers.

Poverty, in what they called the “inclusive social model,” soared to almost 30%. According to the Mediterranean Foundation, unemployment was more than twice the official figures. The labor participation rate fell to 45.2%.

With the arrival of Mauricio Macri as a new leader, change was implemented from a moderate perspective. This means that, instead of making a massive adjustment of the monetary imbalance, Macri prefered to issue debt hoping that growth and return of financial investments would solve the monetary hole created in the previous period.

Taking the opportunity of the enormous liquidity in the market, the new Argentine government proposes an ambitious reform program and hopes that investors will bet on growth and improvements in productivity.

So this bond comes as the first proof of the “benefit of doubt” bet on the new Argentina government.

Issuing a 100 year bond in a country that has defaulted eight times in 200 years might seem crazy.

However, there might be some rational explanations to the high demand for this bond.

So, the question is: Who buys a 100 year Argentina bond?

1. Someone who believes people like Kiciloff willnever return and inflation will drop to normal levels.

2. Someone who expects a large drop in global inflation and lower interest rates around the world for longer.

3. Someone expecting exponential improvements in Argentina under Macri.

4. Someone who expects a rapid revaluation of Argentina, its currency and bonds, especially vs the Brazil ones.

5.  Someone who expects a collapse in inflation globally and real negative yields moving from developed to emerging markets.

There is another important reason. Demand for long term paper is much higher than current supply, and many pension funds need these types of bonds to match their portfolios. Therefore, the yield and duration are attractive for a market scarce of long-term maturity bonds with attractive yields… and they tend to perform very well in the first years.

Skeptics might also believe that anyone who buys a 100 year bond is surely going to see its default but… What if the entire revaluation happens in the first four years?…

The 100 year Argentina bond is the clearest example of what financial repression is doing all over the worls. Markets are taking more risk for lower yields. It is a great opportunity for a government that wants to make changes gradually. However, it could create a perverse incentive to delay essential reforms, and it is definitely also another sign of the enormous bubble we are seeing in credit.