We have long warned about over-optimism regarding inflation expectations, global trade and GDP growth.

The trade balance data from Germany and China again show us the risk of bullish estimates for 2017.

German exports fell by 2.8% in June, compared with an expected -0.3%, the largest drop since August 2015. Imports, which are essential to check whether growth expectations for gross capital formation are true, plunged 4.5%, the biggest drop since February 2009. The market consensus expected an 0.9% increase in imports based on the mirage of an increase in German investment predicted by Keynesian analysts.

China has also published very poor data, casting doubt on overly optimistic estimates of a global recovery in trade. Exports grew in July by 7.2% compared to the previous year, well below the 11.3% in June and the consensus estimates of 10.9%. Again, what we must worry about when analysing an excess of optimism in the forecasts for 2017, are imports. China increased its imports by 11% compared to 17.2% in June and 16.6% expected.

What is the conclusion? We have long warned about over optimism regarding inflation expectations, global trade and GDP growth. Growth is moderate and acceptable, but consensus had been pushed to increase estimates simply to justify excessive valuations, particularly in emerging markets.

This slowdown in global trade has the same explanation as the poor performance seen in previous years. Overcapacity persists, particularly in China, which has not only not reduced that excess, but is increasing it to “meet” its GDP targets. The obsession with demand policies leads us, once again, to be cautious with the ability of economies to reduce their imbalances.

We must pay attention to the risk of a trade war between the US and China. In the first seven months of 2017, China’s trade surplus with the US accounted for almost 62% of its total surplus, reaching $ 143 billion. China maintains an image and messages aimed at free trade, while the US accuses it of implementing protectionist measures of all kinds. 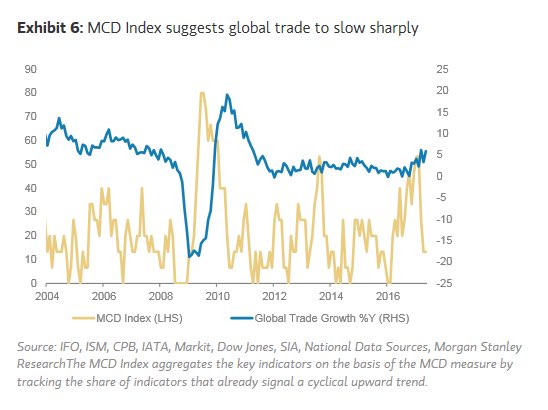 Global growth and real data continue to show moderate growth, but we remain cautious about market estimates that are at least extremely optimistic.