A few months ago Guillermo Gortázar told us that the bailout of Cuba has cost Spanish taxpayers 1.5 billion euros and a deferral of a similar amount by 18 years. The cancellation of the regime’s debt by some countries, unfortunately, has not helped to promote freedom and democracy, but to perpetuate the dictatorship.

The great lie of the communist regime and its supporters to justify the misery in which they have plunged the country in the last five decades is the non-existent blockade. Because there is none. An embargo is not a blockade.

Blockade? Cuba has more than 27 bilateral treaties with 90 countries. 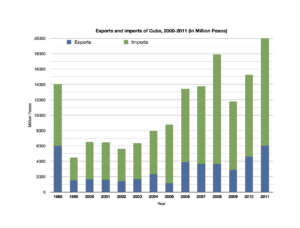 However, the fallacy of this supposed blockade is constantly used to launder and justify the misery and repression of the dictatorship. But in reality, the Castro regime is a machine of squandering subsidies.

The Castro regime dilapidated subsidies from the Soviet Union between 1960 and 1990 equivalent to six Marshall plans and failed to improve its growth pattern or take advantage of these huge subsidies to improve productivity. Between 1960 and 1990, Cuba received more than $ 65 billion from the Soviet Union, not counting those it received from other socialist countries. 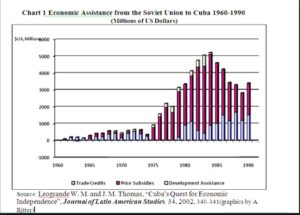 The fallacy of this supposed blockade is used to justify the misery and repression of the dictatorship. But in reality, the Castro regime is a machine to squander subsidies.

At present, Cuba benefits annually from the subsidy made by the Venezuelan regime that covered 70% of the country’s consumption, while it receives hundreds of millions of dollars in international cooperation subsidies.

Despite this, the Nationmaster ranking, which compares the average salary for countries around the world, ranks Cuba last (176th place) in the world with an average salary of $ 25.05 per month in 2014.

The shortage in basic products reaches 70% according to El Diario de Cuba and Infobae, which makes the infamous propaganda that claims “no malnutrition” fundamentally false because almost all Cubans suffer from endemic scarcity.

Anyone who travels to Cuba can see that the constantly repeated “inexistence of child malnutrition” is false and only masks a regime that is still under imposed ration cards and misery .

But it is just propaganda. Unicef does not say that Cuba has abolished child famine at all. Just that the incidence of underweight children has dropped to 4%, a record broken by Chile, for example, that reached 1%. Indicators with similar numbers are shown in Tracking Progress on Child and Maternal Nutrition: A Survival and Development Priority (Unicef, November 2009, pp. 102 ff).  Cuba does not show any eradication of famine, and Chile, for example, shows better figures.

In addition, Cuba suffers from the ” most expensive free healthcare in the world “, as I was told in Havana. The myth of the quality and universality of healthcare has been dismantled on several occasions. María Werlau, from the NGO Archivo Cuba, explained that “health care in Cuba is extremely bad for the ordinary citizen. There is an apartheid that favors the ruling elite and foreigners who pay in dollars”. Videos of dismantled hospitals covered in dirt have surfaced thanks to the power of the internet and independent bloggers.

It is insulting to see defenders of Castro scream against alleged human rights issues in Europe and the US while turning a blind eye on the assault on human rights and dozens of political prisoners in Cuba. Political prisoners, arbitrary detentions and restrictions on freedom of expression, association, and assembly are the order of the day  in Cuba.

Just as we condemn without palliatives the assaults on human rights in any dictatorial regime, we can not soften or whittle the incessant attack against the human rights of Castroism.

We can not forget the Cubans . We can not worry about the Venezuelan people and ignore the assault on freedom and human rights in Cuba, because the problems of the two countries are the same, totalitarianism and the economic destruction of collectivism. And the solutions are also the same. Democracy, respect for private property and economic and social freedom.

Just as we condemn without palliatives the assaults on human rights in any dictatorial regime, we cannot soften or ignore the ceaseless attack against human rights of the Castro regime.

Investing, having diplomatic relations and trading with Cuba is essential to help the country get out of the communist nightmare and improve quality of life, but it is not enough. These relationships should help to end totalitarianism .

Ignoring the suffering of Cubans is a mistake. Justifying it is criminal.

1 thought on “Do Not Forget Cuba”