With the first quarter earnings´season almost over, we can say that the risk of an imminent earnings recession is far greater than what is discounted by an optimistic market.

We must start by understanding that the “positive” surprise seen in this earnings’ season in the US has been driven by two dangerous factors: The first, a very low base, as consensus has consistently downgraded estimates prior to the publication of Q1 results. The second is buybacks. Almost the entire EPS surprise in the S&P 500 comes from buybacks.

There are relevant factors that we should consider as the risk of an earnings recession increases.

The first quarter of 2019 marks the lowest revenue growth rate for the S&P 500 index since Q2 2017 (+5.3%). Granted, it is still a decent figure after years of rising valuations, but the trend is of a clear weakening.

The main sector in a disappointing year-over-year decline in revenues was the Information Technology sector, a bellwether for modern economic growth and historically a decent leading indicator.

The consensus of analysts expects a decline in earnings in the second quarter, low single-digit earnings growth in the third quarter, and high single-digit earnings growth in the fourth quarter. See the pattern? As in other earnings’ recessions, sell-side analysts continue to push Buy recommendations based on the hockey-stick trick. The argument is the following> Yes, the first and second quarters will be poor, but the fourth will compensate the high multiples commanded by stocks. Furthermore, analysts remain bullish about the top and bottom-line earnings- growth for 2020.

In the European case, despite a very low base and double-digit previous consensus downgrades, earnings surprise is flat both on sales and net income. In the US case, buybacks drive a 75.9% positive surprise, in Europe (SXXP Index) a very poor 55%, especially after the large downgrades ahead of publication, particularly on Financials and Oil and Gas.

In the Stoxx 600 in Europe, Oil and Gas, Healthcare and Financials show negative revenue and earnings’ surprise, while seven out of ten sectors show flat or negative revenue and earnings surprise.  This is especially concerning because the consensus of analysts had trimmed estimates significantly in order to present credible expectations that companies can beat. We must remember that in Europe it is quite common to “massage consensus”, which means that companies communication and investor relations’ departments “guide”  analysts to more reasonable figures than their models show. 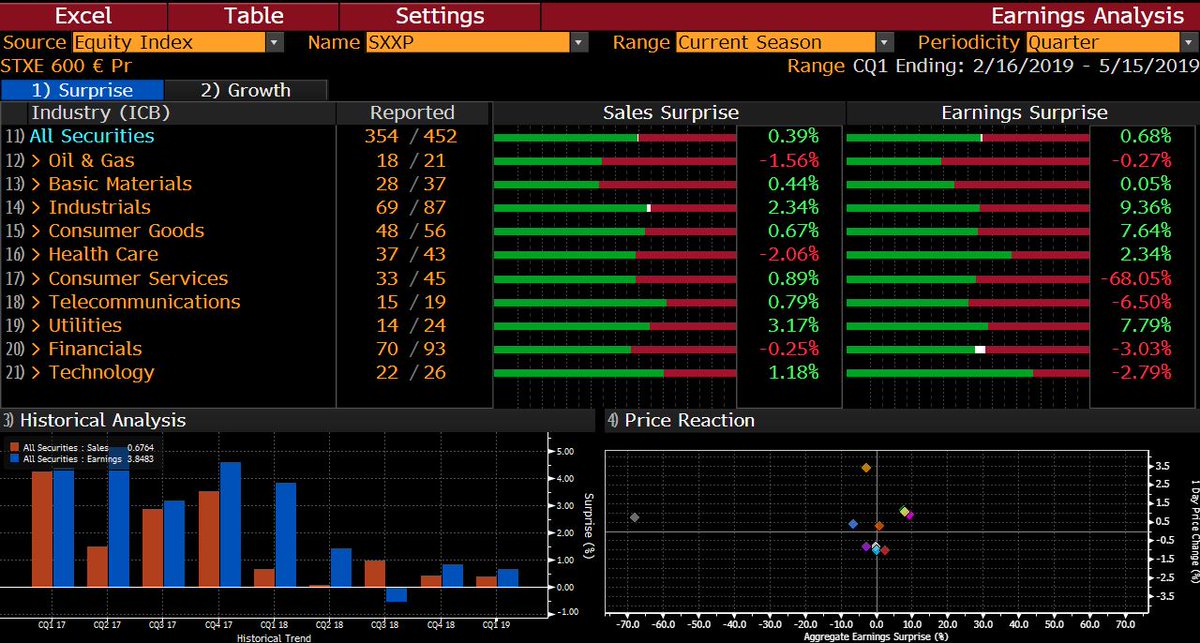 The S&P 500 is quite different, but the signals of risk are not small. Again, and after a sizeable downgrade of expectations,  revenues surprise was negative in six out of then sectors, flat in three. Utilities led the way in negative revenue surprise, which may be a leading indicator of bigger economic concerns, as this is a sector where weather-adjusted revenues tend to be easily predictable. However, the S&P 500 differs from its European counterpart in the strong and broad/based beat and positive surprise in net income. All sectors have shown positive surprise by a healthy margin. Buybacks have been the main factor behind large earnings-per-share beats, and the tax cuts continue to be a strong tailwind for US companies. 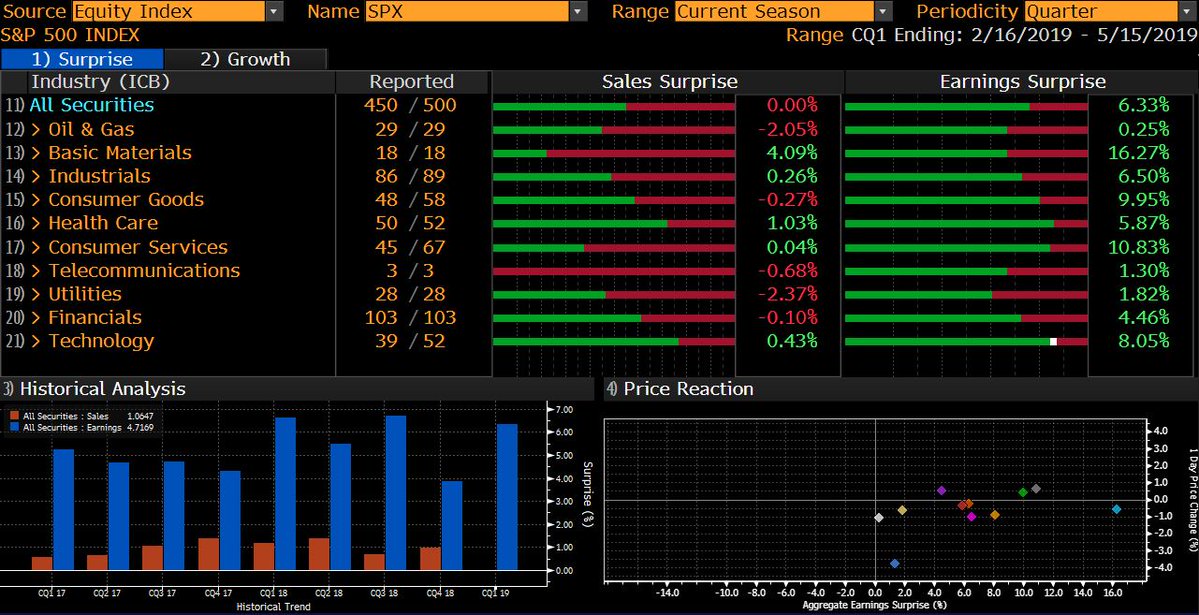 All these figures would be acceptable if macroeconomic indicators -especially leading ones- and valuations supported the market. But it seems quite clear that the main factor driving markets higher is money supply growth. It is not a surprise, then, to see sectors that have no impact from the US-China trade dispute sell-off in line with other sectors.  This is because, as we explained here, the market has used the excuse of trade to sell an expensive and thinly-supported market.

An earnings recession cannot be ruled out at all. Massive liquidity injections are not translating into higher capital expenditure and consumption because of debt saturation and overcapacity. Money supply growth is simply too high for the real demands of the economy. It is no coincide that financial repression helps an expensive market rise further and that the smallest of excuses drives it back down. It is true that, meanwhile, fund flows have shown outflows from equities and into bonds and that sovereign yields have been compressed even more. This is not a sign of optimism, but of caution and rising perception of risk. 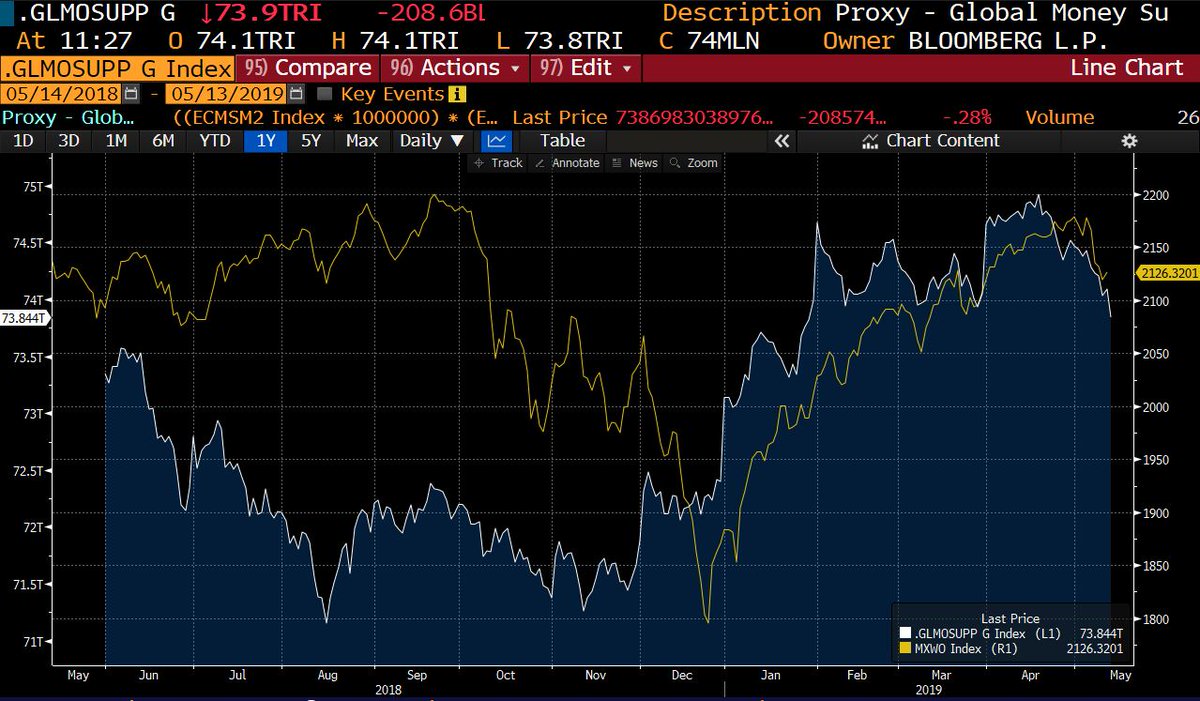 In the past twenty years, it has been common to see a poor first and second quarter earnings’ season followed by a rising market. In those instances, central bank policies have always driven stocks higher in the US, but not so in Europe. With the placebo effects of monetary policy delivering diminishing results, it is important to pay attention to the risk of an earnings’ recession, because it can be the beginning of a severe downturn as companies find it increasingly difficult to support valuations with buybacks and liquidity injections.