We live in panic times. Horror stories abound about shale gas, the energy revolution that has taken US gas prices to the lowest level in decades, has created 2.1 million jobs, 75 billion in tax revenues, 283 billion in GDP, and raised household income up by $1200/yr (source: CERA) … More importantly creating a massive competitive advantage for the US versus Europe and the rest of the world that suffer high cost of energy due to expensive pipeline gas and LNG, polluting coal and heavily subsidized alternatives, crippling economic growth and prosperity. Instead of working alongside industry leaders and innovators, together with environmental agencies and governments to develop this clean and cheap source of energy in an environmentally friendly way, we, in Europe, decide to ignore it. Meanwhile, in the US, the eco-friendly Democrat administration is supporting its way to growth and jobs putting in place the framework to develop this enormous resource in a sustainable way.

I hereby compile the main concerns as outlined in Credit Suisse’s excellent report “The Shale Revolution” (12/17/12) and the essential articles from Robert W. Chase (Debunking the fracking myths) and other experts (see below) with my own analysis from my post “The Energy Treasure That Most Europe Rejects”

Credit Suisse mentions that “environmental concerns have played a big part in the quest to unlock the shale gas potential in Europe. Fraccing moratoriums have been imposed in France (July 2011), Bulgaria (January 2012) and Romania (May 2012), whilst the Netherlands have put shale gas drilling on hold for a further year as an investigation is carried out into the environmental risks”.

Nine hundred billion euros.This is what Europe could save in its goal of reducing CO2 emissions by 80% in 2050 if, in addition to further renewable energy, the continent would develop its shale gas reserves according to this sector study.

Fracking technology, thanks to the revolution of shale gas in the United States is tried, tested and of negligible ecological impact. However, we have seen many alarmist reports, even a movie, Gasland, which was immediately refuted by the industry, scientists and the U.S. Department of State of Energy as inaccurate… But best of all in these alarmist reports is that in every one you read that “we could not confirm accurately any of (these) claims “(Cornell study, for example). When I wrote this post about the shale gas revolution many just ignored it as uneconomical.This reality, Europe’s available natural resources is what none of the politicians and lobbyists mentioned, fans of subsidies, want you to see. They prefer inculcating fear with tales of energy dependence and expensive subsidised technologies. Before looking for a solution to develop the continent’s natural resources efficiently, in a clean and competitive manner, they prefer to ban. And then complain about the energy dependence.
So on to the concerns:
Induced Seismic Activity: I find this the funniest of all when presented in countries that are happy to spend billions building windfarms and solar panels and underground power networks.

“Even those man-made tremors large enough to be an issue are very rare, says a special report by the National Research Council. In more than 90 years of monitoring, human activity has been shown to trigger only 154 quakes, most of them moderate or small, and only 60 of them in the United States. That’s compared to a global average of about 14,450 earthquakes of magnitude 4.0 or greater every year, said the report.

Only two worldwide instances of shaking — a magnitude 2.8 tremor in Oklahoma and a 2.3 magnitude shaking in England— can be attributed to hydraulic fracturing”. “There’s a whole bunch of wells that have been drilled, let’s say for waste water and the number of events have been pretty small,” said report chairman Murray Hitzman, a professor of economic geology at the Colorado School of Mines. “Is it a huge problem? The report says basically no.”

Quoting Robert W Chase’s excellent “myths of fracking”: “William Leith, senior science adviser for earthquake and geologic hazards at the U.S. Geological Survey, told National Public Radio recently: “Fracking itself does not put enough energy into the ground to trigger an earthquake. That’s really not something that we should be concerned about.”
Oil and gas waste water disposal wells, on the other hand, do have a history of causing tremors, most recently in Youngstown, Ohio. However, by reducing the volume of water injected, the depth of wastewater injection wells, and avoiding earthquake-prone areas, the risk of inducing tremors, however small, can be reduced.”

Contamination of groundwater: It is worth noting:. Hydraulic fracturing technology is proven, is used in thousands of wells in the U.S. annually safely, and there have only been one or two cases of minor accidents. The fluids used in the fracking of the rock are composed by more than 99.98% of water (94.62%) and sand (5.24%), with a minimal amount of chemicals, highly diluted, easily stored and handled safely.Of these chemicals, the majority (hydrochloric acid, ethanol, methanol, ethylene and sodium hydroxide) are recovered perfectly in the extraction process.No state or local department in the U.S. has found evidence of water pollution of aquifers. The industry is also using more than 5,000 tons of steel and cement to protect the groundwater, and the fracking process occurs at least a mile deep, well away from the aquifers.
Read: What is in fracking fluids? http://www.energyfromshale.org/hydraulic-fracturing-fluid)
Industry develops nontoxic fracking fluids: http://www.coloradoan.com/viewart/20130204/NEWS11/302040011/Energy-industry-develops-nontoxic-fracking-fluids
Greenhouse gas emissions: The main component of natural gas is methane, a gas associated with global warming when released into the atmosphere. During the flowback phase of shale gas, as the fracturing fluid is returned to the surface, it brings along the natural gas released from the shale.
“Reduced Emission Completion (REC) technologies can now capture the emerging gas at the wellhead and are used increasingly”.
Natural gas generates less CO2 emissions than oil, conventional or non-conventional, and coal, it is the cheapest, cleanest and most abundant source of energy that does not require economic-crisis-inducing subsidies. In my post “How Cheap Gas Killed The Renewable Star” I also mention the enormous economic difference between technologies.
Water sourcing and disposal: According to a report by the UK’s Tyndall Centre for Climate Change, fracking operations carried out on a 6 well pad would require 54,000 ‒174,000 m3 of water. This presents the problem of water shortage in Europe, particularly parts of central Europe. The second water issue if that approximately 10-40% of the fluid will return to the surface bringing with it the natural gas and added chemicals. This is also potentially harmful or environmentally damaging and operators need to provide a clear water management plan before operations can begin.

Robert W Chase wrote “Some mistakenly say the practice can pollute water tables which lie just a few hundred feet or less below the surface. Fracking is done well below 7,000 feet, and solid rock separates the oil and gas deposits from shallow groundwater aquifers. This rock buffer makes contamination from fracking virtually impossible.
In addition, wells are built with at least four layers of steel casing and concrete and are cemented in place, creating a solid divider between gas production and any fresh-water aquifers. Energy Secretary Steven Chu recently asserted: “We believe it’s possible to extract shale gas in a way that protects the water, that protects people’s health. We can do this safely.”

Read more about recycled water use in fracking: http://www.americanrecycler.com/0512/1517energy.shtml

On the positive side: According to a study by IHS Global Insight, in 2010, U.S. shale gas production due to fracking generated $76 billion toward GDP, accounted for $33 billion in capital investments, was responsible for $18 billion in tax and federal royalty revenues, and supported 600,000 jobs. Experts estimate that nearly $2 trillion in capital investments will be created into the U.S. shale-gas industry through 2035. The benefits of such large investments will spread through communities, businesses, and governments.

The US path to energy independence here: http://energyandmoney.blogspot.co.uk/2012/11/the-us-path-to-energy-independence-in.html

“US energy independence is not a pie in the sky. It’s realistic” 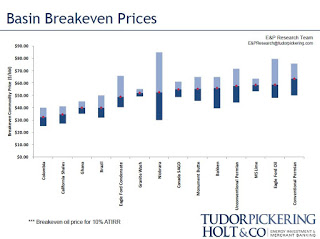 The other surprising new argument is that anti-fracking groups say that shale gas and oil is uneconomical. I shed a tear at their concerns about other people’s money. An industry fully driven by private entrepreneurs, no subsidies, no government,  financed with private capital and very little debt. The average of the E&P sector in US is 2.6x Net Debt to EBITDA -including Chesapeake, ex-CHK it falls to 2x. This compares to 3.5x in other energy sectors and 6x average in renewables, with wind and solar sometimes close to 80% debt at project level. 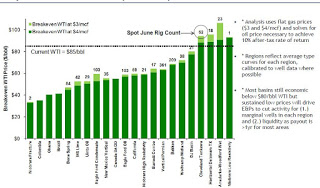 A sector where private investors risk their own money and tens of billions are put to work in shale gas, but seems everyone of those investors is wrong, and (surprisingly) the same defenders of subsidized energies and intervention in energy price mechanisms, forget the effect of shale gas in energy bills… but are the ones that are suddenly worried about investment returns!! and inform us of the poor economics of private cash invested in shale. However, average ROIC (return on invested capital) of the shale gas sector since 2010 has never been worse than 5%… with gas prices falling 21% in 2010 alone! (in 1Q 2014, ROCE of the industry averaged 17% according to UBS and Goldman Sachs) Compare that to any utility in Europe, or any renewable company ex-subsidies, or coal companies.(Charts courtesy Tudor Pickering)

“Hydraulic fracking has been studied with a published paper showing the energy return on investment (aka EROI) with a total input energy compared with the energy in natural gas expected to be made available to end users is similar to or better than coal…
…The analysis indicates that the EROI ratio of a typical well is likely between 64:1 and 112:1, with a mean of approximately 85:1. This range assumes an estimated ultimate recovery (EUR) of 3.0 billion cubic feet per well. This is similar but significantly higher to the EUR of coal, which falls between 50:1 and 85:1.

I made a lengthy post here (http://energyandmoney.blogspot.co.uk/2011/06/peak-oil-defenders-most-overlooked-myth.html) but the words of the IEA make a lot of sense as a finish line: “As long as consumers are willing to pay for it and resources are there, consuming some energy to produce energy is fine”.

(Bloomberg: Feb.11, 2013) – Record petroleum exports helped shrink the U.S. trade deficit in December to the smallest in almost three years as America moved closer to energy self- sufficiency, a goal the nation has been pursuing since the 1973 Arab oil embargo.
The gap narrowed 20.7% to $38.5 billion, the smallest since January 2010 and lower than any estimate in a Bloomberg survey of 73 economists, Commerce Department figures showed today in Washington.
Oil exports climbed $11.6 billion. In addition to trimming the trade deficit, greater fuel autonomy helps boost household incomes, jobs and government revenue and makes American companies more competitive. An improving global economy, reflected by record exports.