Here is the extract of my chat with Gustavo Teruel of the CFA Institute, published here Daniel Lacalle runs a long–short sector-focused hedge fund in London. The hedge fund concentrates on the oil and gas industry, utilities, and infrastructure. Lacalle writes a weekly column for the Spanish digital newspaper El Confidencial and a blog, Energy, Markets and Money, about his areas of expertise. Several times, he has been voted into one of the top three places in the Thomson Reuters Extel Survey (considered the leading benchmark for excellence in investment banking and asset management in Europe) Mr. Lacalle has recently written a book, Nosotros, los Mercados (We, the Markets), released 12 March 2013, about his experiences in the asset management industry. 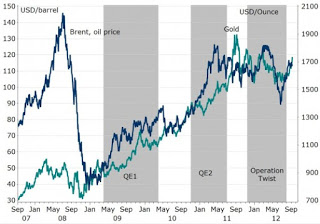 Gustavo Teruel, CFA: Let’s start with oil. I’ve read in your blog that you believe the oil market is perfectly well balanced, with 3.5 million spare barrels per day, which leaves a margin of safety to absorb disruption in supply caused by instability or a natural disaster. What, then, are the main drivers of change in commodity prices according to your analysis?

Daniel Lacalle: The main drivers are mostly perception of GDP moves, central bank policies ― QE (quantitative easing) and USD devaluation explain about 75% of oil moves ― and at the fundamental level, the tightness or looseness of the product market, added to import levels and exportable capacity.

GT: How are the margins of E&P (exploration and production) evolving as the production mix moves toward unconventional sources? Are these companies keeping up because of improvements in efficiency, or is there a downward trend?

DL: Unconventional sources have surprised everyone, showing that they can be profitable at levels that no one dared to estimate. Look at Canadian oil sands or shale gas. Many wrote both off below $100/barrel (bbl) and $5/MMBTU (million British thermal units). Efficiency and technology have reduced costs more rapidly than anyone imagined. Shale gas generates an average 5% return on invested capital at $3/MMBTU, and the oil sands delivered a whopping 15% at $70/bbl. 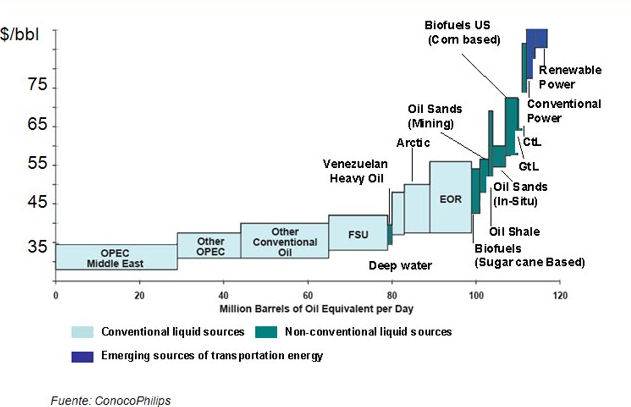 GT: What are your estimates of sustainable growth in the project pipeline of engineering companies if we keep this price level in commodities? Do you see the stocks of these companies also as a hedge against further QE, currency debasement, and so on?

DL: The backlog is not a function of the industry’s ability to take projects, which is very strong. The backlog depends mostly on available free cash flow from clients to invest more. I believe capital expenditure has proven to be sticky, as we saw in 2008 when it fell to less than 12% despite oil prices collapsing to $30/bbl, and will remain so for a while. There is room to grow investments, and the industry is in a second leg of a supercycle of investment. Be careful playing these stocks as currency hedges alone. They do work occasionally, but it’s very stock specific, not sector wide.

GT: You’ve been saying for some time that there wasn’t value in the fully integrated conglomerates, and it seems that this call has started to pan out in the last few months, with some of the big-name companies underperforming their indices. Do you think that the downgrading of these companies has just started?

DL: It is unfortunately just the beginning. These companies’ dividends are unsustainable within the current free cash flow generation environment (very poor despite record commodity prices) and with their investment needs. Most European integrateds pay the dividend with debt, for example. I can bet you that none of the large integrateds will deliver the growth that analysts estimate in the next five years, either in production or in cash flow.

GT: If your longs were a single stock, what stats would it have in terms of valuation, profitability, and growth? And I have the same question for your shorts.

GT: Moving on to utilities. Last week, when I read the latest letter from Warren Buffettto the shareholders of Berkshire Hathaway, I was really surprised to see that MidAmerican Energy has 6% of the United States’ wind-generation capacity and 14% of the nation’s solar-generation capacity. In the letter, Buffett says that they are putting a large amount of trust in future regulation. What differences do you see in renewables in the eurozone and in the United States? Are investors in renewables in the United States bound to suffer fiscal consolidation, as has been the case in some places in Europe?

DL: Investors in renewable energy in the United States do not have to bet on direct government subsidies but on tax credits. That is a huge difference. The second difference is that renewable energy companies in the United States are not as leveraged and politically exposed as those in Europe. They do compete, but they are not position rent seekers and subsidy junkies, as the European companies tend to be. In any case, I would bet Buffett that in the end this particular investment will underperform his initial assumptions. The estimates MidAmerican runs of growth and profitability of those wind and solar businesses will disappoint him immensely in the future. I have the feeling that Buffett suspects it too, which is why he only owns one utility with small renewable content relative to MidAmerican’s other divisions and low debt (inevitably making Europe uninvestable for him). He is undoubtedly smart.

GT: Given that utilities are a heavily regulated industry, do you think it is harder to pick winners and losers than in the oil and gas industry?

DL: It’s relatively easy to pick losers. The utilities industry is a minefield of profit warnings and value-destroying managers who buy at peak levels and sell low, run massive debts, and end cutting dividends and raising capital. But there are many great winners and focused companies. Look at the performance of British utilities relative to Continental European ones in the same currency base. It is shocking that in the same business there can be a strong focus on shareholder return on one side (United Kingdom) and total disregard for it in many of the big power giants on the other side (Germany, France, Italy, or Spain). I warned about this and the collapse of subsidy models in 2008 on my blog. Finding losers is not any not different in oil and gas. I also warned of the value-destroying nature of many of these stocks in 2009. Beware of stocks that are “cheap for a reason.” Value traps are widow makers. And these two sectors have many.

GT: Do you expect the EU to move toward a cheaper, more sustainable energy model? What, in your opinion, are the major obstacles to change?

DL: The EU doesn’t care about cheap and sustainable. If it did, it would not promote energies through monstrously expensive subsidies. Remember that this is the first time since the Industrial Revolution that governments have made a conscious decision to promote expensive and uncompetitive sources of energy versus cheaper alternatives. In energy, substitution has always happened through competitiveness, availability, and affordability… except in the Eurozone in the last 10 years. The EU cares about central planning, subsidies, and cronyism — thus the massive de-industrialization of the Continent because of unaffordable energy costs. If the EU cared about cheap and sustainable, it would not have implemented subsidies and taxes everywhere. The major obstacle is intervention and Soviet-like planning that creates overcapacity and inefficiency, which ends up being paid by consumers.

GT: Finally, I guess you came here also to speak about your book, Nosotros, los Mercados. How would you summarize what you try to convey with your book?

DL: It’s a very personal book that uses my experience and professional journey to explain how markets work, life in Wall Street and the City, the main events of the past decade, the main issues in this money-printing environment led by central banks, how and why we ended up in this monster debt crisis, and the market solutions to reduce imbalances and to avoid creating bubbles. The book also gives personal tips on how to invest, how hedge funds work, and what the different tools are that small investors can use.

GT: Do you expect to publish an English version of it in the foreseeable future?

DL: It would be an honor. I hope my publishers see that task as feasible and that we could make it happen.

2 thoughts on “My chat with the CFA Institute”