” Those who believe in Abenomics are suffering from amnesia. This is nothing new ” Yasunari Ueno (Mitzuho)

A few months ago in this blog I commented that the policy implemented by Japan to fight deflation is nothing new, and as such would not meet the expectations that consensus gave to the supposed magical solutions. And so it has been.

In my post “Japan and Manga Money“I explained that the country has made ​​tremendous stimulus plans since the mid-90s and expansionary policies since 2001 without exiting stagnation.It is curious that the monetarist policies are defended as being social and redistributive. However, there is nothing social in money printing. Marc Faber explained it clearly: “Printing money does not benefit other than those who have access to such funds, ie, the financial sector, the government and the upper classes, never to workers.”Now, a year after the implementation of Abenomics we can check the fallacies used to justify these measures:

“Japan will grow at 4%,” said the economists of consensus. Nope. Someone should say sorry for making a mistake of more than double in their estimates. The chart below, courtesy of Juan Rallo, shows almost no impact of the expansionary policies on quarterly GDP.

And we should highlight the disappointing data released. The Japanese economy grew 1% annualized in the fourth quarter, compared with 2.8% expected, and not enough to offset the slowdown in the third quarter. Japan grows at the same rate as … Spain.In fact, the 4Q GDP growth figure was revised down in March, from 1% to 0.7%. Barclays had to lower its estimates for 2014 by 40bps to 1.0% growth and by 10bps for 2015 to 1.2% growth.If correct, Japan, increasing money supply by 40% will grow in 2014 and 2015 as much as the EU reducing money supply.

In 2014 the International Monetary Fund (IMF) estimates a growth of Japan’s economy of 1.7%, while 1.1% expected for the Eurozone . That is, with the Bank of Japan increasing the money supply at massive levels, they expect very modest growth, while in Europe a similar GDP growth is generated when the European Central Bank (ECB) reduced its balance sheet by 20%.

Increasing the money supply more than the United States, Japan’s public debt reached a record volume of 1,018 trillion yen in December 2013. About 7.3 trillion euros after six stimulus plans since the 90s.

The amount exceeds the 1,011 trillion yen of September and is more than twice the nominal GDP. Debt grows not only in absolute terms but also relative to GDP. All I hear is “we must give some time” … after only 25 years of Keynesian experiment, it “was not enough”. However, the Ministry of Finance estimates that the volume of debt will reach 1,039 trillion yen in March. 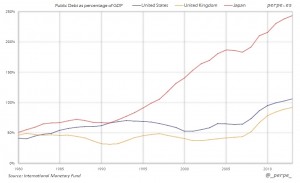 Japanese debt is owned by… the Japanese. 85% of it. Despite paying 0.6% interest on their ten year bonds, Japan spends 22% of their annual budget to pay interests on debt. One thing to remind to those economists like Stiglitz, who say that the volume of debt is not important, but that the cost is low. Krugman has the nerve of saying in his column that “such 22% includes repayment of principal” …. When Japan only increases its net financing needs!.  No debt is repaid, but refinanced and issue more. 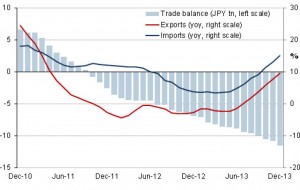 Printing not only increases the debt, but the trade deficit has shot up to an unacceptable level .Some try to justify it by the effect of the Fukushima accident and the cost to rebuild Tohoku after the earthquake. But it’s the typical Keyn

esian excuse when something does not work. Tohoku is an annual cost of $ 1 trillion yen (2013) and the trade deficit exceeds 11.4 trillion yen, the biggest hole since 1979. Fukushima and the closure of nuclear power plants is an event in March 2011, and until Abenomics was implemented the trade deficit was manageable. Since then, it has tripled. Devaluing makes the cost of imports skyrocket more than the placebo effect of exporting more.

Here comes the trick of adding figures. Proponents of monetarist policy to “create inflation”  are very happy because in Japan it has reached 1.6% and is on track to reach the target of the government of 2%. Remember “inflation is taxation without legislation” (Milton Friedman.) The silent tax. But there’s a trick.Inflation in Japan rises because of energy costs and imported goods, not because wages grow or we see an improvement in other concepts . In fact, inflation, excluding food and energy, is very low, 0.7%.

The mantra “if inflation is generated, the Japanese will consume more” does not occur. It does not encourage consumption or economic activity acceleration … Because disposable income and wages are curtailed.Before an expected sales tax in 2014, what happens is that the disposable income and purchasing power of the population suffers greatly. Real wages in Japan have fallen to the lowest level of the past twenty years .Money flows only to risky assets. On top, the stock market rebound is irrelevant to the wealth of the Japanese, who have less than 8.5% of their financial assets in equities, compared with 32.7% in the U.S.

Japan has always had a very low unemployment. Not due to monetary policy, but to demographics.An unemployment of 3.7% is due to a spectacular industrial power and business climate, and a culture of work and sacrifice recognized worldwide… And an important demographic effect. Since the 2007 highs, with 128 million inhabitants, the population has fallen at a rate of nearly one million annually. In 2013, 244,000 less. This has created a shortage of work … and a brutal surplus of pensioners (23% of the population is over 65 years) at a cost to the state until the Japanese government considered “unaffordable”.

Printing money does not create jobs. Otherwise, the countries that do it would have had full employment for years. But it’s still worth noting that the labour participation rate in Japan has also plummeted, rebounding slightly when real wages have collapsed -especially for women- to 1994 levels.Japan, unlike the United States, has a shortage of workers due to the effect of the low birth rate (1.4 children per woman) and an ageing population. And yet, if we remove the pensioners effect, nearly 17 million people of working age have been taken “out of the charts” of unemployment.A year of Abenomics can not have thrown a worse outcome and further away from its promises. Atrocious.But don’t doubt it. When Abenomics or its equivalent number 35 continues to generate pedestrian growth, more debt and more holes in the pockets of citizens, some will say that it “would have been worse”, “not enough was done” and “we need to repeat “. And mistakes shall be supported by a social veil that neither you nor the Japanese people will see. Then we will read “we have to be patient, improvement comes next year,” while the average citizen feels another hand in the pocket.