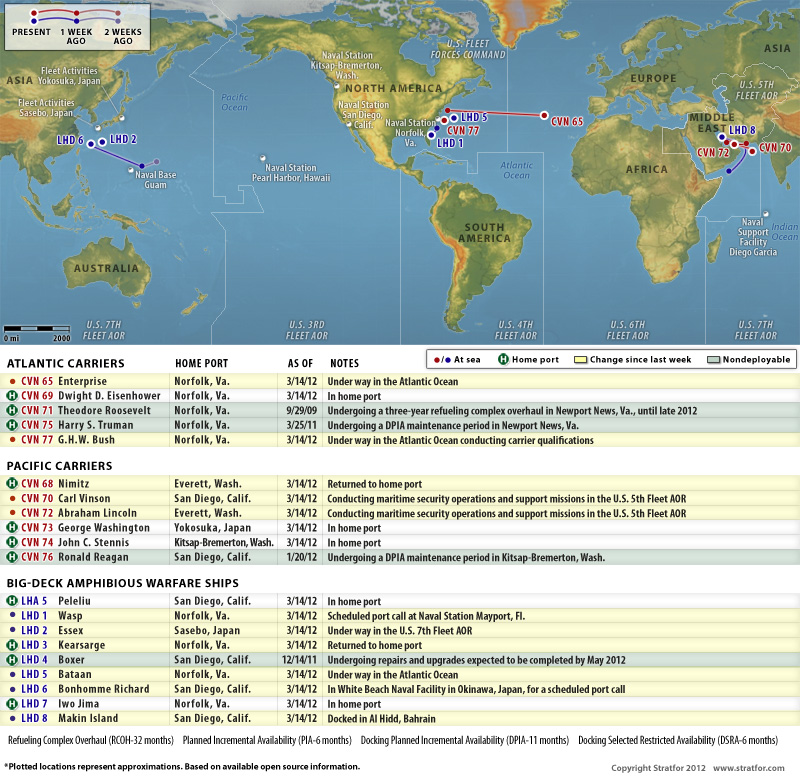 The picture above shows the recent move of warfare ships in the region (via zerohedge).

According to Israel’s NRG and CNBC, Netanyahu has achieved a majority (8 over 6) supporting an Iran attack. NRG also notes that at this point Israel has decided to not wait until the US elections in November before proceeding with an attack.

I believe Israel is trying to push the US administration and Europe to be more forceful and strong in its sanctions against Iran, but as my friend David Simantob mentioned in my Facebook account:  “I think what we are dealing with is a lot of noise from Israel to push Obama and others to act to isolate Iran. Remember nobody did anything until Israel started threatening to attack. Now we have a EU embargo, Swift (the international financial transaction system) kicking Iran out and soon we may even have an embargo on Iranian imports of refined petroleum. I don’t think Israel wants to attack Iran and I don’t think any attack by Israel will sufficiently delay a nuclear weapons program in that country. What Israel wants and what will work is strict sanctions combined with efforts for regime change in Iran. Iran ruled by sane people like a western democratic movement would not be a threat even if it did have nuclear weapons”.
I would like to highlight a few issues:
a) Iran cannot shut down the strait of Ormuz easily. It would be like shooting itself in the foot as the country would be undersupplied and unable to export, but it would also mean a declaration of war against Oman, as Ormuz is in its waters too, which is equivalent to an attack on Saudi Arabia and the Arab League.
b) The strait of Ormuz only moves 11% of world oil output now, so the impact on crude suppl would be very limited before the alternative route (the horn of Africa) is used by tankers.
c) Iran total oil exports average 2.15mbpd, of which virtually nothing goes to the US, 10% go to Italy, c18% to the rest of Europe, while most Iran’s exports go to Asia (China, Japan, India and South Korea in particular). Spain imports c196kbpd from Iran. France (58kbpd) and Germany (15kbpd) can play hardball with Iran and not bear any real cost. So the EU embargo is not a real issue. The IEA estimates 2011 Iranian crude imports into Europe at 792k bopd (Italy 185k, Spain 196k, Belgium 36k, France 58k, Greece 103k, Germany 15k, Holland 15k).
d) So far in 2012, Saudi Arabia ouput increase has more than compensated the drop of Iran supplies. To the point that OPECsupply is at record highs, while OECD inventories, as we have explained here ( http://energyandmoney.blogspot.co.uk/2012/03/us-talks-of-releasing-strategic.html#) remain at very high levels, so it seems the world has been quietly preparing for a disruption of Iran supplies at least, whether there is conflict or not.

e) Israel is not defenseless, as it has more than two hundred atom bombs that can destroy Iran’s facilities. The issue is that Israel does not want to be bullied and pushed to attack by Iran’s threats and promises to “wipe Israel from the face of the Earth”, and then “blamed” for the deaths of innocent civilians. Iran has carefully placed its nuclear facilities as close to population centres precisely to prevent such a situation. But Israel cannot live easily with the idea of a nuclear-powered country that promotes forums to debunk “the myth of the Holocaust”, and that vows to destroy the jewish country.

Interestingly enough, all the problem would disappear with a moderate Iran and if Ahmadinejad stopped promising the destruction of the jews as a core part of his political agenda.

The problem of an attack on Iran is that it would be extremely costly, around $100m per day, a logistical nightmare, as Azerbaijan will not allow other countries to use its territory to launch an attack on Iran (according to Defence Minister Safar Abiyev) and probably highly ineffective as it would probably cause a popularity surge for Ahmadinejad, which is what we have seen so many times in the past. Former Bush administration National Security Advisor Stephen J. Hadley has already warned against an attack on the Islamic Republic yesterday. “If something needs to be done, it is not military action,” said Hadley. “There’s a wide spectrum between sheer diplomacy and military action.”
On the other side of the analysis, some think an attack on Iran is the “least bad option”, as this article highlights  http://www.foreignaffairs.com/articles/136917/matthew-kroenig/time-to-attack-iran . My concerns remain both on the risk of a surge in support for the Iran regime among muslim countries and also on the threat to the civilian population of Israel, and Iran.
If the issue is to halt the Iran nuclear programme, I believe the way is to impose really strict sanctions as well as promoting a true regime change at the same time, using the threat of an attack to its nuclear facilities as a threat, sort fo a multiple diplomatic attack, but I must say that the proposals I have read so far (here) don’t seem too convincing.
In this article (http://www.haaretz.com/print-edition/opinion/sanctions-alone-won-t-stop-iran-s-nuclear-work-1.265981) the journalist warns against the resignation to an inevitable nuclear Iran:

.The Chinese are still opposed to sanctions and the Iranians are enriching their uranium to a higher level. Obama’s response is that he has had it and the time has come for sanctions and immediately – which means within a few weeks, perhaps by the end of March. In March, however, Gabon will assume the presidency of the Security Council, and it is not certain that Iran is at the top of its agenda. And there are still the problems with the Chinese.
And if we assume that ultimately there will be sanctions, so what? The involvement with sanctions, who’s for and who’s against, when, why and to what extent, deflects from the primary problem – the absence of an American strategy for tough negotiations with Iran. Even more serious, however, is that there are worrying signs that the Obama administration is beginning to resign itself not only to the fact that Iran will continue to enrich uranium, but also to recognition that the Islamic republic could ultimately build a nuclear bomb.

Credit Suisse had an interesting feedback from Dr Mohammed ElBaradei, the recent ex-head of the International Atomic Energy Agency (IAEA – ie the nuclear weapon inspectors) and Noble Peace Prize awardee. His view is that:

Let’s hope there is no attack or any relevant conflict and that Iran allows inspectors to its nuclear facilities while we see a transition to a less aggressive government in the beautiful Persian country.