The great debate in modern macroeconomic analysis focuses on whether the processes of public spending cuts that are being carried out are consistent with fostering growth or whether spending cuts threaten economic development.

Many anti-austerity economists like Krugman, who calls for more spending but also massive wage cuts, or Stiglitz warn of austerity as a driver of deepening crisis.

I’d like to give a summary of the talk I gave a few months ago in Austin and Dallas called “Austerity Works” and why it is in Spain and Southern Europe where budget control is most needed.

The first thing worth to note is that Europe is not undertaking true austerity measures, but very modest cost savings. In fact, in most cases the cuts have only slowed down the speed of spending growth. As we explained here to reduce the “deficit” from 8.9% to 5 % is not austerity, it’s just fiscal prudence. It is not the same to aim for debt reduction than to reduce its increase.

The first argument often used by those who attack the austerity programs is to compare this process with what happened in the 30’s, that is, a worsening of the crisis. But these arguments tend to forget the differences between both periods.

* In the thirties there was a combination of austerity with protectionism , a lethal combination that our rulers should avoid. In a globalized world it is very difficult that we can see the wild U.S. protectionism of the 30s. Unfortunately, this is where Europe can err seriously, since political intervention and protectionism is growing, but not alarmingly.

* In the thirties interest rates were extremely high and the financial capacity of the systems was very limited. That is not the case today. The role of central banks and the globalization of the financial systems has changed this risk dramatically.

* In the thirties quantitative easing was not used as a tool to mitigate the risk of deflation and stagnation. But there is a huge problem to solve. The QE (quantitative easing) that the U.S. Fed makes floods the system with money directly, skipping the banks as an intermediary. In Europe, the monetary policies have been directed solely at banks, which hold on to the funds, buying sovereign debt, without extending credit to the real economy.

The current problem is that the increased liquidity provided by the ECB fails to reach businesses and families. As the chief executive of a large Spanish company said to me “credit crunch here is affecting the small and efficient businesses, not the inefficient overgeared large companies.”

The reasons why I believe that more spending is equivalent to a shot in the foot is as follows:

* Spending more did not work, repeating it is suicidal . Spain increased public spending by 67.2 billion euros between 2007 and 2011, 6.4% of GDP, to generate a GDP decline of 3.3% and a fall of industrial output of 12.7%, with an increase in unemployment to 24%. That increased spending also meant a cost of additional debt equivalent to 0.3% of GDP. Spain SA not only did not stop the crisis spending, but rather deepened it. The figures in Spain are devastating, but the U.S., UK and the Eurozone demonstrate the same principle, that increased spending has not produced a real positive impact on GDP.

I always speak about the debt saturation model. When an additional unit of debt does not generate additional GDP, but negative . We have saturated the dubious benefit of spending. A clear example of this aspect is the infamous Plan E of the Spanish government, 13 billion euros, only generated debt, job losses and lower GDP. 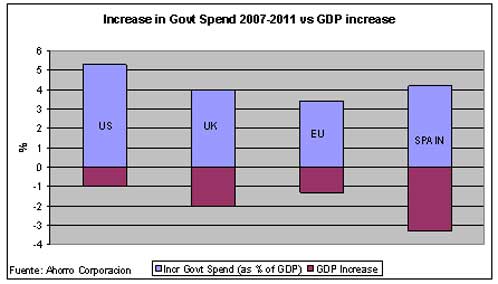 As we have seen in the past years, “lack of austerity” is expensive, but indiscriminate spending is even worse. I always say that if Krugman was able to read the details of expenditure items in many European general budgets he would join the Austrian school in a minute. We are not just talking about tens of billions dumped in phantom cities, unused airports, useless infrastructure and outright subsidies and grants. The problem is that all these expenses are not supported by an equivalent income (no ROIC, Return on Invested Capital) thus leaving behind them not just a non-existent value, but an unpayable debt that must be covered with higher taxes destroying other activities and productive sectors.

Useless infrastructures and subsidies are not only wasteful, but the debt they leave behind is also crowding out and taxing the profitable and productive sectors. The subsidy and uneconomical public spend culture also becomes a private “investment deterrent” . No one dares to put a penny in an economy in which taxes generated by productive sectors will be used to cover liabilities of unproductive wasted capital.

Why does austerity work:

* It frees financial resources from unproductive to productive activities. Today, almost 70% of financial resources available are used to purchase public debt and finance government expenditure. It is the crowding out effect of a State that accounts for more than 50% of Europe’s economy. If the State stops monopolizing the majority of credit availability, and also stops spending on unproductive activities, private investment activity and high productivity activities return. It is no coincidence that the states that have cut public spending are the ones that create more jobs.

* It accelerates the transformation to a more productive economy. It is no coincidence that productivity falls with increasing public spending. Most public spending stimulus plans are directed to subsidies and to rescue declining industries (mining, automobile) and very low productivity activities (construction, civil engineering), and it monopolizes scarce financial resources which precludes private investment in high productivity areas. If countries rescue the inefficient by taking from the efficient one’s pocket, investors fly away from the country and moves to more attractive places.

* It helps create real jobs, not subsidized labour. When the State spends on pointless companies and investments with no return, it does not create employment, it subsidizes it by borrowing. And that cost comes from taxpayers until the State runs out of other people’s money and the pyramid collapses. Europe has seen the destruction of more than 80,000 small and medium enterprises annually while governments subsidize spending that also destroys public jobs in the medium term, when money runs out.

* The increase in interest expenses from more government debt hinders recovery and generates tax increases that discourage consumption and investment as well as repel capital. If Europe stopped issuing new debt to pay interests on old debt it would start to solve its problems.

It is relatively easy, austerity would help: Not only stop paying unnecessary subsidies and reduce billions of euros of cost of additional debt, but austerity attracts capital and reduces the loss of tax revenue by bringing new investors. And instead of removing 0.3% of GDP increasing debt, GDP would be up reducing the financial burden.

The well-intentioned recipes of Krugman and Stiglitz start from incorrect assumptions:

. That most European governments would spend taxpayers’ money more efficiently and wisely than private investors.

. Even worse, they assume that those European governments would base their investment criteria in a capitalist, return-driven, open-market, Anglo-Saxon way.

. And much, much worse, they assume that the investment decisions of most European governments are compatible with private investment, when often they aren’t.

Most of these “growth plans” have proven to crowd-out private investment, prevent competition, unfairly defend unproductive and declining sectors, and aim at safeguarding inefficient low productivity oligopolies. As such, in many cases European government spending has proven to be in most cases more damaging than helpful for economic recovery, and it widens the funding hole.

We need to escape the spiral of spending, of favors owed, protectionism and subsidies, we need to stop rescuing the unproductive and, through lower taxes and lower spending, foster investment private capital, innovation and growth.

The Myth Of European Austerity

The European House Of Cards

1 thought on “Austerity and Growth. Why It Works”