During the intense weeks promoting my book Journey to Economic Freedom I’ve been asked several times about my opinion on Bitcoin , the so-called “virtual currency” that has increased in price more than 100 times in eleven months.

My opinion is simple. Bitcoin is not a reality, it’s an expectation, and therefore its price evolution depends on it getting deployed globally and clarifying doubts about its role as a method of payment and ‘storage of value’. 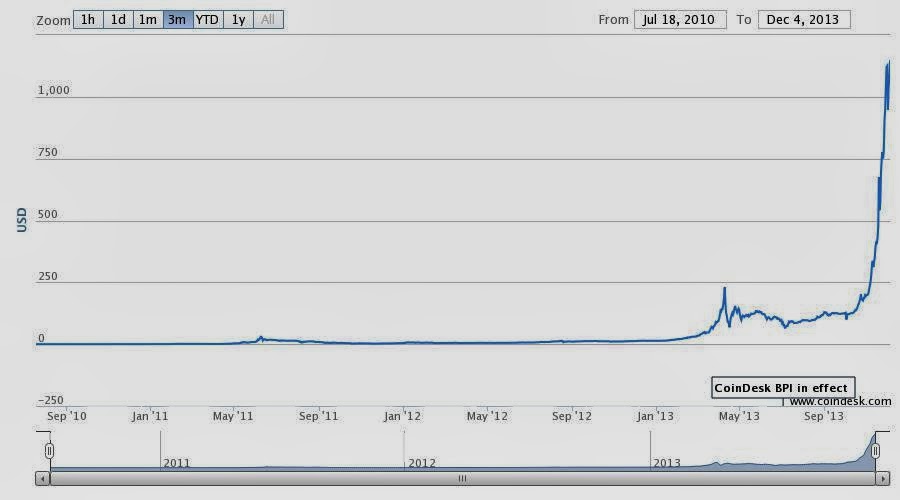 Bitcoin is a startup currency. Its initial appeal is undeniable. A method of payment where states can not interfere in the money supply, and where investors can find a safe haven from the assault on the saver that is the increased financial repression imposed by governments and central banks. Sure, but my doubts come when the haven is virtual, and therefore always subject to hacker attacks. In addition, there’s the risk of a confiscatory reaction from states if it reaches a ‘dangerously high “implementation. ‘Free’ currencies tend to end up being abolished or confiscated.

For now, Bitcoin is not a currency, it is an exchange network. Like a financial asset, a future or a derivative. Unlike legal tender currencies, no one is forced to accept it as a method of payment. It is not dissimilar to a barter coupon. You accept it as payment for goods and services just the same way as you use something  that is perceived as valuable by both parties, buyer and seller, be it a watch, a car or Bitcoin. As such, its value ​​comes from the generalized perception of scarcity, future demand, liquidity and quality as a means to exchanging it for another currency, goods or services in the future.

As a ‘storage of value’ asset it has some similarities with a gold ETF, but it is massively more volatile… and virtual. Therefore it is subject to extreme changes of perception with a supply and potential demand that is difficult to estimate.

However, it has no real similarity with physical gold, having no history of transactions in times of extreme crisis. Everyone knows that gold can be exchanged for goods and services in case of a global catastrophe. Nobody knows yet how you create virtual storage of value.

To be a currency, Bitcoin must go a long way in implementation, and be accepted globally for large and meaningful commercial transactions.

Is Bitcoin a speculative bubble? A pyramid scheme, a Ponzi scheme?

I finally received a good report with a detailed analysis approach (‘Bitcoin, A First Assessment’ by Bank of America Merrill Lynch ) that seeks to clarify the risks and opportunities of this virtual phenomenon.

According to Merrill Lynch, assuming Bitcoin becomes a widespread means of payment for transfers and e-commerce, an approach to its valuation could be reached through the addition of:

– The average capitalization of established means of payment such as Western Union, MoneyGram and Euronet, c$4.5 billion.

– The expectation that Bitcoin could capture 10% of global e-commerce, and the U.S. investment bank estimates this at $5 billion.

That is, around $9.5 billion capitalization, ie, below the market level, which stands above $13 billion.

The first part of the valuation analysis seems appropriate in a conservative scenario, but some could say that Bitcoin, having the benefit of a restricted supply, should capitalize above Western Union.

But it is the second part of the sum which is more complex to analyse. To reach $5 billion, Merrill Lynch assumes that Bitcoin would accumulate 10% of on-line residential sales in the U.S., and extrapolates it to the rest of the world. In the U.S. the total e-commerce market is $224 billion and the domestic sector (households) accounts for approximately $10 billion, of which 10% would potentially be absorbed by Bitcoin. If we assume that the U.S. is close to 20% of global GDP and a similar degree of penetration of both trade and on-line commerce of Bitcoin in the world, Merrill’s analysts arrive at the figure of $5 billion capitalization. However, according to my own analysis, that number could be much higher if we include companies using Bitcoin aggressively. If we add companies with 10% implementation, this part could reach $50 billion capitalization, assuming other electronic payment penetration levels.

Such an assessment would indicate that Bitcoin is either nearly 30% above its fundamental value, or up to 420% undervalued, depending on the penetration assumptions.

That is the dilemma of analysing Bitcoin, to understand the ability to penetrate markets that today are huge and where a space can be generated for this method of payment without falling into the risks of:

– Being a threat to states and their control over currency and the money supply. In a world where central banks and governments have made financial repression as a last resort to support excessive debt spending, the use of legislation to attack any means that threatens their main weapon of economic policy should not be underestimated. Bitcoin, even in the middle of the valuation range, would be far from becoming a ‘problem’ like that.

– Confiscation of assets Roosevelt-style as we have seen in the past with gold, and other paradigms of government actions to steal the savings of investors in ‘safe havens’. Being a virtual asset makes this very difficult, but not impossible.

For Bitcoin to be a bubble, global electronic commerce estimates should be much lower than the current maximum capitalization, ie the perception of demand unachievable in a fairly conservative analysis. That risk is not there looking at sales trends of global on-line commerce.

In addition, to be a bubble, Bitcoin should meet the requirement of having a rapid and increasing supply well above demand. Bitcoin supply is limited to 21 million by 2140. 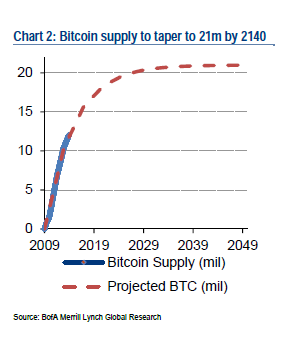 To be a Ponzi scheme it should meet the following criteria:

– That profitability granted to existing holders of Bitcoin is ‘guaranteed’ and coming from the additional coins purchased by new investors, ie, to make the basis of ‘new investors’ only growing. That is not the case, the valuation of Bitcoin it fixed by demand and supply generated by a multitude of buyers and sellers, and sellers have no false guarantee or allegedly safe “return”. 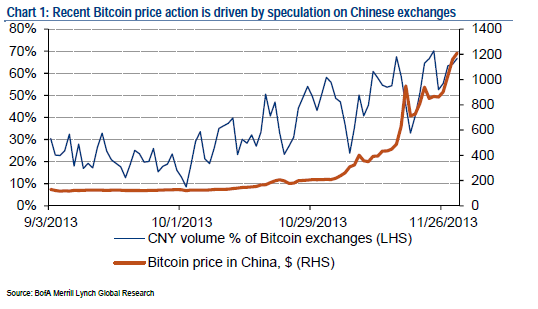 – That price dynamics is uniform, opaque, controlled by a single operator and providing a false sense of ‘security’, ie it only goes ‘up’ until new buyers stop falling in the pyramid scheme and it explodes. Bitcoin buyers are aware of the volatility and possibility of selling at a loss. Bitcoin has seen huge rises in price and massive  falls, it behaves more like a financial start-up, an asset where price is being checked every day according to the potential supply and demand.

Bitcoin, for valuation purposes, is equivalent to a tech startup or a junior explorer-miner. Its value only transpires when it begins to dispel doubts about its implementation as a combination of means of payment and safe haven.

To achieve the potential and penetration needed to justify much higher prices, there are two things to look for:

– The enormous volatility, with moves of 30-40% in one day, makes it difficult for large companies and massive consumers to accept it quickly. Volatility itself prevents its penetration into the mass market. To be a universally accepted means of payment it should have similar levels of volatility to those established currencies or gold. That’s why I say it’s still not a currency, but a volatile financial asset . 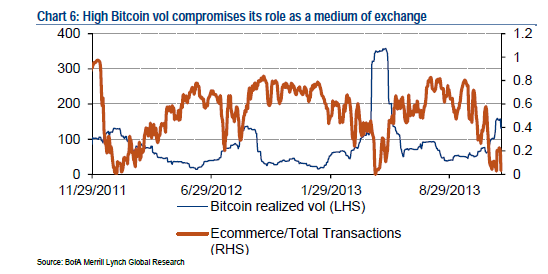 – The length and quality of exchange. Bitcoin has a major advantage, supply is limited, and to avoid manipulation by a bank or state, there is no centralized validation system (clearing) that is why each transaction is analysed and delayed, to avoid double counting. Well, for large transactions this means a wait of up to fifty minutes until a payment is confirmed, which greatly limits the mass deployment in companies and trade. Furthermore, several of the servers have been ‘hacked’. One such exchange, Bitcoinica lost 18,547 bitcoins after a cyber attack. BIPS in Europe lost 1,195 after a security issue.

When transactions are immediate, safe and not subject to huge volatility, valuation of Bitcoin could start to make sense.

There are still many doubts to clarify. What I find interesting is that Bitcoin shows that more people are scared and looking for ways to get out of the vicious circle of financial repression and devaluation of currencies. The implementation of an ‘intervention-free currency’ or means of payment can only be positive. And, if Bitcoin or any other free currency ends up being widely used, it may restore sanity to those governments that engage in this race of currency destruction they want to sell us as ‘social’ and that in reality is just a massive transfer of wealth from savers to the indebted states.