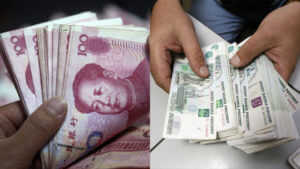 If there is something ironic, it is that, whatever happens, politician always thinks that money is their monopoly.

The data for 2016 of the BIS (Bank of International Settlement) show a very different reality from the one that the European, Japanese and Chinese central banks want us to see. The US dollar is not only the most traded currency in the world but its use has increased since 2013 from 87% to 87.6% of global transactions.

The Euro not only continues to be a global anecdote but its use has fallen since 2013, from 33% to 31% of transactions. Remember that the sum of all the transactions that the BIS calculates is 200% because each monetary transaction includes a pair in another currency.

The Chinese currency, the yuan, is only used in 4.0% of transactions, in a country that is more than 15% of the world economy.

Now, as we have heard on dozens of occasions in the past, the conspiracy theories are dusted off and we read in different news reports that China and Russia are going to dethrone the US dollar by launching contracts on oil and other commodities in yuan. China and Russia have switched to domestic currencies in trading using financial tools as swaps and forwards, seeking to reduce the influence of the US dollar and foreign exchange risks.

Will these measures dethrone the US dollar as king of currencies?

I am very sorry, but the reports of the end of the US dollar are simply conspiracy theories.

A currency is not a world reserve because it is decided by a government or group of them or because it is imposed militarily. If a currency could have been imposed by military might or political repression, the Soviet ruble would have been a world reserve currency, and the Chinese yuan would not be a mere 4% of world transactions. A currency is a global reserve when confidence in it as a means of payment and reserve of value is maintained throughout the world in the face of the evidence of risks with local currencies.

The megalomania and mistaken policies of politicians all over the world with respect to their ability to manipulate the purchasing power of their local currencies are precisely what reinforce the position of the US dollar as a world reserve. That is also the reason why the Swiss Franc, the Canadian dollar or the Australian currency are used more than the Yuan and other apparently almighty military powers. It is not military or political repression that makes a currency attractive, but rather the credibility and the depth of the secondary market.

A currency war is the one that everyone denies and, at the same time, all practice

As I explain in Escape from the Central Bank Trap (BEP), “The US can carry out many erroneous devaluation policies because it always looks in detail at the global demand for dollars and that its remains as global reserve. In other words, it always pays attention to the secondary market and the confidence in its economy and institutions, as well as keeping an open economy and capital markets. Those who intend to use monetary policy without understanding the importance of maintaining the status as a reserve of value and generally accepted exchange mechanism, believing that this is something that the government decides by decree, will always fail. And they impoverish those they pretend to defend, the poor.”

Why China will fail to dethrone the US dollar.

I believe that China will fail in its attempt to impose the Yuan as a currency for global transactions for several reasons.

First, because it wants the world to widely accept the Yuan while maintaining monetary repression via capital controls. As the British say, they want to “bake the cake and eat it.” What kind of global reserve can be created when capital controls are imposed? None. No economic agent will accept it.

Second, because most economic agents are aware that the huge imbalances of the Chinese economy will likely be disguised with a huge devaluation. The average of estimates assumes between an 18% and a 20% additional devaluation against its main trading currencies in the next five years. The more this inevitable correction is delayed, the less the possibility of reinforcing the credibility of the yuan as a world reserve currency.

Third, the financial balance is against them. The reason why China maintains completely obsolete capital controls is that domestic economic agents, as soon as markets open, do everything possible to get rid of their yuan in the face of the evidence of a huge devaluation. That is why China has lost almost one-third of its reserves in foreign currency in a few years.

The only way in which China and Russia could pose a threat to the US dollar would be to defend sound money and end the disastrous monetary policy that governments are conducting. A commitment to a return to a gold standard and avoid massive money supply increases. However, that does not seem to be the case, rather to spread China’s monetary imbalances to the rest of the world.

China and Russia will likely fail in their war against the US dollar if their objective is not sound money, but to impose their currency devaluations on the rest of the world.

The difference between a global reserve currency and the rest, with all the errors and imbalances that the US makes, is that it benefits in relative terms from the other countries’ mistakes. When governments think that they can do the same monetary policy as the US because politicians decide so. Thus, central bank after central bank, country after country, they approach the monetary cliff under the assumption that “there is no risk,” “everyone does it” and “this time it is different. ” In that race to zero, everyone goes hand in hand like the Von Trapp family in The Sound Of Music. But when they reach the edge of the cliff, the domino of collapses affects only those currencies that played God without considering secondary demand, global confidence, and utilization.

“We can do what the Federal Reserve does even if we are not global, strong and widely accepted as currencies” is the number one mistake of central banks all over the world.

Of course, the rulers of all those paper empires are advised by hundreds of economists who tell them that nothing happens if they increase monetary imbalances. And they are always wrong. But the damage is paid by others.

The advance of cryptocurrencies in this race to see who destroys more the purchasing power of its currency becomes a threat not only to the yuan or the euro but to the US dollar as well. What Hayek predicted in Choice in Currency (1976) and Denationalisation of Money (1990) is unstoppable. The destruction of the monopoly of money in the hands of the states.

The mistake made by China is that it thinks that its currency will be imposed through repression, and not from market confidence. In the US, the Federal Reserve constantly monitors how to maintain confidence and increase use of the US dollar. Because of this, China will likely fail. Like all those before who did not understand that money is not what the government wants, but what citizens accept.

The only way to threaten a global reserve currency is by being stronger and defend its purchasing power. Any other way is likely to fail. Better the devil you know than the devil you don’t.

3 thoughts on “Can China Really Kill The US Dollar Supremacy?”