We seem to have forgotten fundamentals. Even Keynes recommended lowering taxes in periods of recession to boost consumption and investment. Sweden tackled recession cutting taxes (see here since 2006 corporate taxes to 22% and service sector VAT from 25% to 12%), and Chile, the UK and US have succesfully avoided tough economic environments by keeping low taxes to companies and job creators. 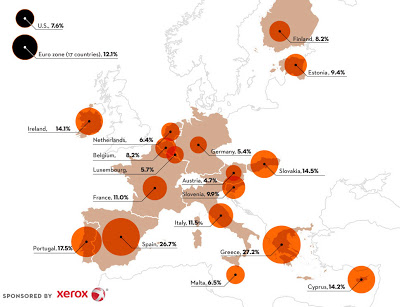 No, it is not a coincidence that countries with high and unfair taxation, massive public spending where the economy is overtaken by government (Europe’s periphery and France) absorbing c50% of GDP, are also the ones suffering the worst of the recession. Because predatory tax environments are simply eroding any chance of recovery as the private sector gets more and more squeezed to support bloated administration structures. When deficits are mostly current spending and no investment, when the number of subsidized citizens almost equals the number of taxpayers, the broken system is not only problematic, it is dangerously threatening any improvement.

Despite deep flaws in the structure of the states, many commentators cling to monetary policies as the solution. This will do nothing while the structure of government and public spending remains repressive and anti-social. Money is created but monopolized by semi-bankrupt and unsustainable welfare states, and highly indebted banks. Therefore monetary policies only support inefficient and indebted parts of the system, while real investment collapses.
It is the private sector that will lead Europe out of the crisis. Not more debt, more stimulus and more government spending.

Instead of betting on the booming sectors, that have behaved impeccably throughout the crisis, we run the risk of further clinging to the money illusion and government plans to deliver “growth”-debt, more like it- as if they were magic solutions. However, the solution is here and now in our countries.

Give disposable income back to families and the middle class to boost consumption, cutting taxes.
Let SMEs deliver the growth that they have been able to build in the past, and create new companies and jobs with favourable fiscal policies.
But first, let’s debunk the myths we hear in Europe almost every day. I will focus on two sentences that are repeated over and over. “Obama’s policy creates jobs” and “If Germany carried out expansion plans it would solve the crisis” because they are incorrect. Then, I will analyze where the real recovery will come from.
Obama and jobs“The aim is to reduce unemployment,” said Ben Bernanke, Federal Reserve chairman, while he explained that the labor market remains poor and that the recovery is weak.
The Obama administration boasts of having “created” five million jobs with a monetary and stimulus plan that stands at $2.1 trillion and counting. Overall, if we believed the jobs figure, it comes to a cost of almost $500,000 per job “created.” But the figure is incorrect , as CNN proved, showing that the bullish data “forgets” several months of the administration’s tenure and the unemployment of that period. Even Bernanke and David Stockman, from different sides, alert of the lowest level of labor force participation in recent decades.

But job creation doesn’t come from money printing or government policy. If so, Venezuela or Argentina would be the countries with highest employment gains. It comes from innovation, low taxes and cheap energy. The energy industry has created 680,000 jobs since 2010, and it has created the largest free private stimulus, cheap and abundant domestic oil and gas. The fracking revolution has led the US to have 50% cheaper power than the EU and 75% cheaper industrial gas. That’s a real stimulus. Private investment, not money printing… and without subsidies.The reality is that when the eternal stimulus plan was announced, the promise was that it would take unemployment to 5%, and if it was not applied, government threatened that it could reach 8% … And after billions of dollars spent, unemployment is at 7.5% , 11% according to some analysts . America is a magnificent country due to its dynamism, leading companies and entrepreneurial spirit. Their booming sectors, technology, oil and gas are going to get the country out of the crisis, not magic intervention formulas. Low taxes leads to the virtuous circle of saving, wealth preservation, consumption, investment and jobs.Germany and growth

My good friend Rui Soares, an excellent analyst, commented recently that a German expansion to help the periphery simply would not work . Why?

– If we are optimistic and assume that German imports would increase by 5%, this would be less than 0.1% of the GDP of Spain. Considering a multiplier of 2.5, the maximum increase would be 0.25%. Suppose a similar effect on all countries exporting to Germany, and the impact would not exceed 0.5% of Portugal or Greece’s GDP. Again, this being very optimistic.

That is, making Germany accept inflation and an expansive policy they cannot afford -just look at their banks-, does not solve the problems of the periphery.

The sharp adjustment in domestic demand in peripheral countries, and entering into current account surplus, are much more effective policies to lay the foundations for growth. Why?

Because the impact of an improvement in peripheral Europe foreign direct investments multiplies the positive impact, in the case of Spain to 3% of GDP and in portugal, Greece or Italy by c2.8% without adding more debt and risk to the Eurozone, and at the same time it helps solving the inefficiencies of bloated economies.

Spanish exports reached a record level in the first months of 2013. And not just shoes and tourism. 60% of exports come from transportation equipment, electronics, precision machinery, chemicals … This means  multinational companies that invest in the country.

That is the road to recovery, but it needs a lot more foreign direct investment. And this will only come when the business environment and taxation system is attractive, predictable and unquestionnable. And then, domestic demand will support job creation, if we allow consumption to grow … lowering taxes.

(Chart indicates fiscal pressure, income per capita and fiscal effort -which is more relevant in EU countries due to weight of SMEs- )

Europe has a problem. A 12% unemployment rate. This problem increases mortgage delinquencies and obliterates consumption. Internal devaluation does not recover economic activity. Given that wages cannot rise, we must recover disposable income of households and businesses, cutting taxes and cutting government spending. Political spending -that is, the cost of pure administration and subsidies- is the problem. It takes between 5 and 6.5% of GDP in most European countries. Countless duplicated administrations, thousands of government bodies, regional, local and state bureaucracy, and thousands of loss-making public companies.

Neither the State nor the subsidies create jobs. Consumption creates jobs.

In these months I have seen more than 82 companies that simply cannot hire, even if they wanted, due to bureaucracy and low margins after massive tax increases. Read here the effect of raising taxes vs reducing expenditure compared to economic growth.

Tax increases perpetuate an inefficient and bloated state and create a vicious cycle that confiscates disposable income, destroys consumption, hurting businesses, delaying investments and preventing employment recovery. Without consumption there is no investment or jobs .

We can print money, subsidize and get more into debt, it will not work. If the disposable income of the people does not improve, we will only make things worse.

On Thursday I shared two figures with my readers (from Direct Line for Business):

The best growth plan is lower taxes and cut red tape, let those companies that are exporting in times of crisis expand and create jobs.

Europe will not get out of recession and create the millions of jobs needed in a committee or a summit.

Jobs in Europe will not come from massively indebted governments, or large multinationals that already have more employees than their international peers, or through subsidies.

Jobs will come by cutting red tape and providing a non-predatory taxation for entrepreneurs, people create their own work and SMEs.There are no magic potions. The solution for Europe is already here , not thanks to governments or central banks, but due to the innovation, effort and quality of our companies. Let them grow.(This article was published in El Confidencial in Spanish on May 25th, 2013).