(This article was published in Cotizalia on June 23rd, 2012)

The big news of the week was the presentation of the independent assessment of capital needs of Spanish banks. It is interesting, but on Tuesday I was at a dinner with several managers and analysts of the financial sector, and all of them were spot on about the figure that would be published: A maximum of 60 billion euro.”A solvent banking system” read one of the local press headlines. The ones that have proven to be solvent are the usual suspects: Santander, BBVA, etc… And a positive surprise in Sabadell, which came off better than expected by the market. The savings banks have proven again to be the main problem, because a financial hole of tens billions is frightening.

What angers me is that this tremendously harmful process of “pretend and extend” the problem has led to cast doubt on the solvency of some banks that never should have been doubted. Not all the savings banks are a problem either. It should be noted that Caixabank, made the transition from savings bank to commercial bank and proved to be better-prepared within the national economic disaster.

It is worth to note that at least for the first time, the Government has sought to manage expectations. Hence, the chain of events: 1) The IMF says that the capital needs of banks are 40 billion euro. 2) The State requests a loan of 100 billion euro, and 3) independent consultants put capital needs between 15 and 62 billion, depending on macroeconomic conditions. All happy, instead of changing numbers every three months.

However, if we go into detail, this is another “stress test” I am afraid that leaves more questions than answers.

All prior stress tests have started from the premise that they were very conservative, but the market misses ​​a genuine exercise in “cleaning up the closet.” Let us not forget that all entities that have gone bankrupt – Dexia-, or have been intervened, passed the “stress tests” with flying colours. And do not forget that in 2006 one of the consultants, Oliver Wyman, said that Anglo Irish Bank was the best bank in the world . And it went bust.

Everyone can make mistakes, of course, but what is important to note is that these reports are neither aggressive nor conservative in their estimates. That is the premise from which we must start the analysis. 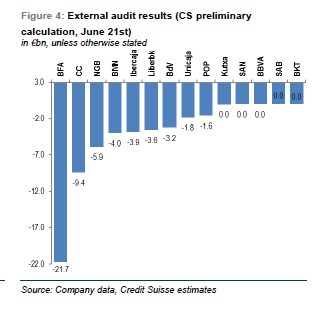 Spain is the only country that has made ​​the exercise of bringing independent consultants. It is an important exercise in transparency.

. Now no one doubts that losses in the “adverse” scenario would reach about 250 billion euro, with recapitalization needs of 51-62 billion. And forget about the other scenarios. The independent reports themselves provide many clues and reasons to consider that the “base” scenario is the least relevant, starting with bank profits estimates, GDP growth and estimate of fall in home prices.

. If recapitalization needs remain in the medium scenario, the State would not use much of the 100 Billion loan granted by Europe, reducing the negative impact.

. Listed banks are saying they would not need to access the loan and provisions will be made ​​against their results. Let us see if I banks make the necessary capital increases, as Italian banks did.

. The Government itself, as part of the committee preparing the basis of the report, has allowed some macroeconomic estimates for the base and adverse scenarios that in many other countries would have not been allowed.

– The consultants have not analysed corporate risk, liquidity, and sovereign risk. There is no review or analysis of the substantial portfolio of sovereign bonds, or the DTA (deferred tax assets), or industrial holdings losses, when latent losses are very important, estimated at 20 billion euros, according to Merrill Lynch. This is very important because in some cases more than 70% of the core capitalization ratio (CT1, Tier 1) is made of government bonds.

– The acceptable solvency ratios are calculated at very low levels: They use an acceptable ratio of core capital (CT1) of only 6% in the adverse scenario, while 9% is used in the base scenario. If the economy is going to deteriorate further, would financial institutions be allowed to reduce their capital ratio from 9 to 6%? This difference alone can enlarge the capital needs by 50 billion euros, according to BNP or Credit Suisse.

– The estimated “new profit generation ability” clearly seems benign for the banks, at approximately 64 billion of profits in the adverse scenario. It seems at least optimistic, since the entire sector generated 100

billion in the last three years. If the economy collapses it is very difficult to estimate this level of profits as “conservative.”

How to save the system from another “stress test” in a year:

I have participated in the documentary, “Fraud.Why the great recession” , which outlines some of the essential measures to prevent further financial shocks from a liberal perspective. It is worth listening to some of these ideas and leave behind the old arguments of “that’s impossible” or “it has never been done” to find sustainable solutions.Using core capital ratios of 6% or 9% is simply putting patches. Banks cannot be so thinly capitalized and risk going bankrupt with any small change in the markets. Banks must be capitalized at least 25%, and ideally build a cash to deposits reserve ratio that gets as close as 100% as possible.

The risk spiral “sovereign debt-bank balance sheet” should be cut. They cannot keep gorging on Treasuries, because when bond yields rise it impacts the credit quality of the bank through the cumulative risk in the sovereign portfolio.

The spiral of corporate risk should be limited and provisioned at market prices. Industrial stakes, with millions in latent losses, should be reviewed and banks should get rid of those that are not profitable.

Don’t bail out banks. The bail-in alternative we always mention is the logical one. Bailing out banks perpetuates the incentive to lend recklessly, to continue to take risk “suggested” by politicians and fail again. Use the EU loans to guarantee bank deposits and liquidate the insolvent ones or we will have another round of “bailouts” in a year.

Leave any intermediate solutions. There are no partial provisions for zombie loans. Provisioning “part” of Non Performing Loans does not cut the risk. It perpetuates it. And old school bankers know it.

Finally, conduct a continuing review of the loan portfolio by independent entities and increase international transactions.

If the entities base their risk analysis less on PowerPoint, and less on optimistic own research, banks will see the beginning of the solution and the return to a banking model that has made some of our institutions and managers global models. Do not forget that the solution is not so crazy, because we have it in the past.

1 thought on “How to Save the Spanish Banking System”