Inflation has been one of the main drivers of market positioning in recent months, and a major driver of the recent correction in financial markets. However, can we say we are in a strong reflation period? Hardly.

First, January data was strongly affected by the season effect and a weak dollar. Almost all the surprise in inflation came from weaker currency moves. Core annualized CPI  remained at a modest 1.8%. This is consistent with the low growth in productivity (+0.5% per annum in the past five years), the perpetuation of overcapacity in key sectors for inflation, and the difinflationary effect of technology improvements and healthier competition. Nothing negative about it all.

A market that reacts negatively to a 2.9% wage increase and record-low unemployment is a troubled one, I must say. That is not bad for anyone. And it is worrying to see that some investors favour “bad news is good news” trades expecting more monetary stimulus.

It is even more worrying to see economicts happy that headline inflation rose due to food +0.2% and energy +0.5%. No consumer ever has benefitted from rising food and gas or power prices. And, again, it shows a worrying fixation of economists with higher inflation at any cost even if it is negative for consumers.

Headline inflation at +2.1% is just a small bounce after the recent reflation fall, as Keith McCullough shows (see graph below).

Retail sales and gross formation of capital still point to a +3% GDP growth for the first quarter of 2018.

Unemployment trend is still positive but the US is now clearly in full employment mode, so the benefits will likely come from a long-overdue recovery of labor participation rates in all segments. Until we see that recovery to pre-crisis levels, wage increases remain positive, but not a signal of overheating.

Meanwhile, earnings season continues to show the improvement of profits. We have seen 390 companies of the S&P 500 publish results, and earnings surprise has been positive on almost all sectors (see graph below), while guidance remains robust and corporate buybacks above estimates.

The long-term trends of technology innovation -disinflationary but enormously positive for the economy- and perpetuation of overcapacity through low rates, added to the welcome disinflationary effect of America’s energy independence goal, point to two main factors. Longer and more sustainable growth while inflation is unlikely to soar.

Nothing to worry about here. 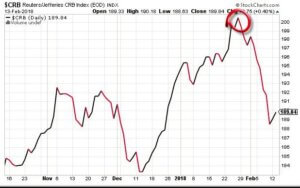 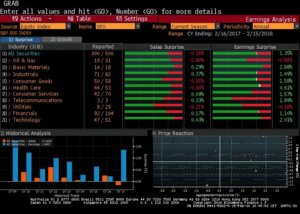