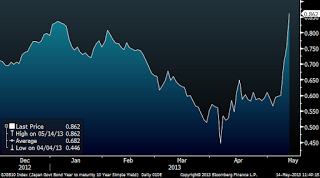 The play year-to-date has been that historical QE would push yields lower, as they have in the US QE process, but there appears to be sharp rotation away from JGB’s in recent days.

You can choose to read this positively or negatively for Japan, many will say that breaking the bond market is what the economy needs, eg, rotation into growth-related investment.
However, a good chunk of this may simply be rotating out of the country into US debt or anything non-JPY denominated.  Japanese ownership of US treasuries soared to $573bn (Japan Tops China Buying Treasuries After Lost Decade – Bloomberg)
Many Japanese firms are rather leveraged and will suffer from rising term rates should the economy fail to rip along with the fading currency.
Recall also that government receipts remain anaemic and there is a large budget deficit that shows little signs of improvement, along with the largest debt/GDP on the planet (more than Greece). Japan’s sovereign debt is 24 times its tax receipts.  The US’s sovereign debt is 6 times its tax receipts.

Additionally, seems that this massive stimulus is not working well… Energy costs have soared 26% since January.Yes, nominal GDP is up 0.9% (3.5% ytd)… After collapsing in the last quarters of 2012… Printing money gives the laughing gas illusion. But wages, investment and corporate spending are still subdued. According to Bloomberg, “dragging on growth for a fifth straight quarter, private non-residential investment subtracted 0.3 percentage point from annualized real GDP. The level of business investment in January-to-March was the lowest since the second quarter of 2011. Companies also drew down inventories last quarter, taking 0.8 percentage point off GDP. The so-called GDP deflator, a broad measure of prices across the economy, tumbled 1.2 percent from a year before, the most since the final three months of 2011, underscoring Kuroda’s challenge as he seeks to end more than a decade of entrenched deflation”.

Wait til cost of debt and energy adds to the corporate bills.

And the Third Arrow… backfired

“Abenomics is like smothering a jalapeño pepper with chocolate. It still tastes of jalapeño” (heard in market)

It was to be expected. On June 5th, Abe outlined measures such as setting up special economic zones to attract investment and a vague promise of “raising incomes by 3 percent annually” but failed to address reforms surrounding the labour market and corporate taxes.
Unfortunately, Abenomics “third arrow” was more of the same seen in the last thirty years. More public spending, more bricks and mortar -infrastructure- and no real reform of a bloated state, of vested interest and crony-ism problems, rigid labour laws, poor margins and inefficiencies of the system.
Reuters mentioned that anyone expecting a broad overhaul of Japan’s economy that would remove barriers to competition will likely be disappointed, and they were right. In fact, Shenzo Abe’s speech seemed to be more focused in perpetuating the statu quo and leaving all improvements to money printing.

“The ‘Third Arrow’ was never going to be a magic bullet because deregulation means changing behaviour and moving from vested interests to new entrant investment,” said Jesper Koll, head of Japanese equities research at JP Morgan in Tokyo. “You are in a country that is obsessed with creating a Japanese-style capitalism rather than market fundamentalist, Anglo-American-style capitalism. It’s still Japan”

Japan’s Manga Money Policy: (This article below was published in El Confidencial in Spanish)

“The Bank of Japan’s huge bet by boosting quantitative easing will not turn the economy around and is instead sending the nation Toward default” Takeshi Fujimaki.

A well-known blog (Macro Man ) calls the latest stimulus “the Japanese laughing gas” because it creates an illusion of happiness . I call it monetary Manga, in honour of the superbly fantastic comics from Japan.

In my opinion, supporters of this policy face two problems: the evidence of the failure of the experiments of recent decades and especially if other countries take to the same madness policies, the side effects are simply unpredictable . In any case, the “experiment” will be paid by you.

Wild stimulus policies are always adorned with a “social” objective. “It’s for your good.” “Without them it would have been worse.” But they are profoundly unjust, anti-social and, most importantly, ineffective. They just benefit financial assets and cronyism.

Some say Europe should do the same. Why?

The simple explanation is that they assume that if you print money, liquidity floods the system, it stimulates productive economy, savers are forced to reinvest, which in turn improves the country’s debt situation, lowers the cost of debt of companies, reducing unemployment and avoiding deflation. What a blast! All at once. No need to change the economic model of low productivity sectors, and welfare state inefficiencies. Just devalue and stimulate. Except it does not work.

Spain, a country that experienced the disastrous competitive devaluations of the 90s, should know. A country that sank the economy and put it at the brink of bankruptcy “stimulating” through spending between 2007 and 2011 should be cautious and learn from its history. But no. We like Japan, but without Mitsubishi or its productive workforce.

The data in Japan is challenging and we should very carefully calibrate the siren song of easy solutions.

After many trillions spent and years of implementing the policies that some want for the EU:

I focus here on the Credit Suisse report “Japan Implications” and DBS Group’s “Japan: Gauging the Impact QE” to see how many things remind us of our countries.

The Bank of Japan has been implementing expansionary policies since 2001, and so far:

So why do it? Easy, let me tell you where the money from the Japanese population is. In deposits and currency, 56% of the total. The Japanese citizens save. A lot. The government feels the need to stick its hand in that pocket … devaluing. But the Japanese, like the Europeans, do not spend more. The big problem is that the velocity of money, which reflects economic activity-continues to fall despite wild liquidity. It is all in bonds of extremely indebted states and banks. The lack of consumer confidence does not dissipate by manipulating monetary variables because most fears come from lack of security and tax increases.

Japan, the ‘Hedge Fund’ of a single bet.

The Japanese economy is extremely dependent on the global economic cycle -correlation of business profits to global industrial production is twice compared with the U.S. or the UK-, and generates very low margins. Several large companies get returns significantly below their cost of capital. Exporters, but not tax paying -due to low margins- enough to support a bloated state and an ageing population .

The decision of the Bank of Japan is like a huge speculator borrowing dozens of times is assets with a single bet : that Japan will export its way to profitability and generate sufficient tax revenue at the expense of the rest of the world. That bet is exactly that of all OECD countries are following. Just this time, Japan is much more leveraged. A bet with the money of future generations.

The consequences of following the Japanese monetary policy elsewhere are clear:

And of course, like Japan in the two lost decades, we would see that big structural problems are not solved and that countries do not reform . As such, if the rest of the OECD relaxes to the manga money illusion, Japan would lose its bet as growth will remain anaemic, and not just remain in an untenable situation, but even weaker.

If Europe and the U.S. want to win this race with Japan, it’s best to use the liquidity and asset bubble to reform, to be more competitive and reduce public spending. That is why I totally agree with the stance of Germany and Finland in the European Union and defend not to participate in the contest “to see who gets into more debt and defaults first.” If I am not right, we will be better anyway. And if I am correct, we will avoid being the fool who gets the shortest stick in the contest of “who goes bankrupt”.

1 thought on “Japan and Manga Money”