This week we are starting to publish “Front Row”.

While controversial and sometimes politically incorrect , he presents an unbiased market view and while he uses both internal and external research at no point this should be consider Credit Suisse’s view.

It is a pleasure to get the market view from excellent professionals and market . It is intended to be a periodic (weekly, bi-weekly) view of markets from friends that might help get a better perspective. Here we go… Round one 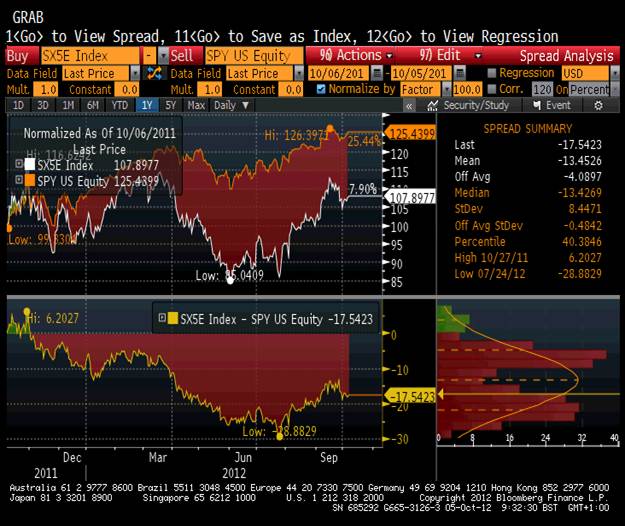 In this note we have argued about a bad number being good for the market or just being bad…and I have always argued that a bad number is just that. Bad. And similarly, for a good one.

However when discussing this yesterday with the team the view was slightly different: “if the number is good it should be really good for the market and if it is bad you should not read too much into it and use it to buy the market” Chandan said..

Why? The Ben is there and the reason for QE3 was the unemployment and growth mandate the Fed has, if this round of QE does not work then he will do QE4 and he will not stop till he turns it around.

As Garthwaite told me yesterday, investors should start getting very used to exceptional low yields as they are here to stay “for 10-20 years” – clearly little Rod’s economic books will look a lot different from mine!

Will they won’t they?
Last week I did talk about Catalonia and the Spanish bail out, I said that this government was not ready yet and today I am going to try to give some more colour on it.

So yesterday Luis de Guindos , Spanish Minister of the Economy and Competitiveness, at a conference at LSE mentioned that Spain did not beed a bail out …but did he really say that?…Luckily for me my friend Juan (Did not you miss him) was there (unfortunately a 5pm talk is too early for some hard-working Spaniards I know….) and to my question :”Has DeGuindos lost it ? “ Juan replied: “ Actually this interpretation by the press is misleading what De Guindos actually said was “ Spain does not need a bail out …we are talking about a financial assistance programme or a credit line”

In summary this government is as scared as the previous one, Zapatero would not mention the word “crisis” but downturn, slowdown etc the Conservative party will not talk about bail out but Financial assistance….no comment..

So everyone knows my view that Spain should have already asked for such help, but digging a little bit deeper my conversation with Juan got into an interesting area.

Basically Juan’s argument is that politicians (mainly from the core) need to clarify their position on the burden sharing of the recapitalization of the financial legacy positions.

Germany, Finland and Holland are now saying something completely different to what they said in July .

Clearly the Irish and Spanish thought that they had signed for a recapitalization of the banks that will be pooled by all the EU countries once the European Bank Supervisory would be created . However the core countries are saying that is not exactly what they signed or what they thought they had signed…therefore it is normal that Spain is quite sceptical about signing a new MOU.

Following his argument , which I must recognize is quite a valid one he added:

“Rod, Why should Spain ask for a bail out in a week that BBVA has issued €2B (trading 40bps tighter today) , Popular is near to raise €2.5B on a capital increase, Telefonica is raising today and the Treasury raised €4b?”

My answer was immediate: “ come on!!!! this money has been raised because the market discounts a bail out is practically imminent” Juan’s point was that is not related to the Spanish bail out but to the increased confidence on strength of the Euro .

I do not doubt he might be right but the performance of the recent performance of European Equities vs. US ones clearly does not show me such confidence.

One question is still unanswered, “ Why has Spain not used the existing, authorised loan to recapitalize Bankia?” That was the question my friend wanted to ask yesterday to Mr De Guindos, unfortunately some idiot with a “Spain for Sale “ placard managed to get all the attention….

Something has to give in. Are you sure the flows have not come?
I understand the S&P is near the highs and people are getting nervous

I have even mentioning that my big worry was which hands were holding this market, I had the impression that hedge funds were loaded on risk, banks back books were running as much risk as the whole year and long only money had already rotated their portfolio towards cyclicals, i.e. unless there was new money coming we were creating the perfect formula for disaster. However there have been a couple of articles this week that make me revaluate these assumptions.

“For the first time this year, hedge funds are turning away from a rally in the global stock market. The ratio of bullish to bearish bets among professional speculators fell last week and is below historical averages, according to a survey by International Strategy & Investment Group. The reduction came as the MSCI All-Country World Index extended its yearly advance to 12 percent and contrasts with January, when managers bought shares as they rose, data compiled by ISI and Bloomberg show. The unexposure from hedge funds, as well as fund managers is just spectacular. The ISI gauge of hedge-fund bullishness measuring the proportion of bets that shares will rise slipped to 46.5 last week from 48.1 in late August. The level is below the measure’s 10-year average of 50.2, the ISI data show “

If that is true then we all know where the pain trade is by looking at the chart below….. 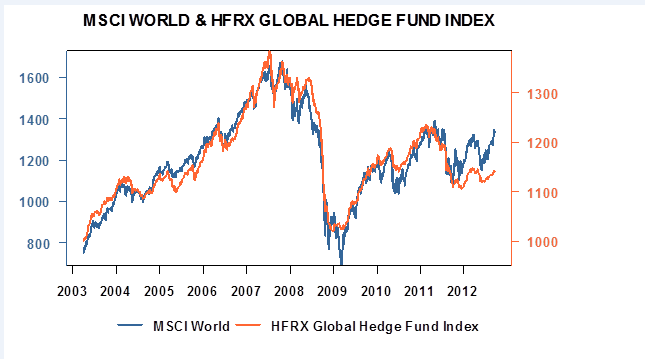 On the other hand we might not have felt that so much new money was put to work through our desks in Europe (cash, PT , D1) but clearly the following justifies why the S&P is so solid and that my perception was wrong: Please click here to view the report: Largest Inflows Since 2008: 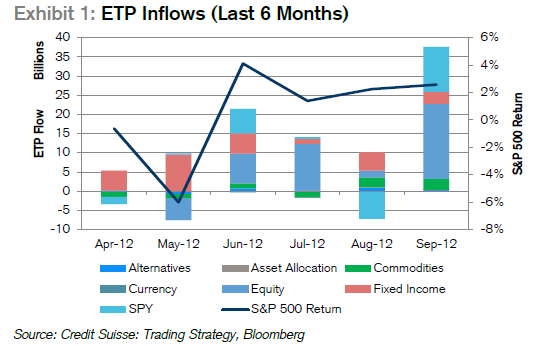 Once again on my Multi Asset Risk meeting, the following was mentioned: “Great market for High yield origination” “Rates near historic lows” “ Funding is extremely quiet and unsecure funding is no problem” “largest quarter ever on global high yield, inflows continue while spreads keep tightening” ….. So there was only one more thing to check then , is the S&P expensive compare to other asset classes? I asked my friend Leonardo Grimaldi for some colour on Equity risk premium and these are his thoughts

“We at HOLT have just done an analysis of the US equity risk premium and estimated it at 7.5%. The last time it was this high was in the early 1970s, a period characterised by stagflation, high unemployment, and an oil shock. The equity risk premium is calculated as the difference between the real cost of equity and the real cost of debt. The real cost of debt now stands at a 40-year low, as a result of very loose monetary policy post Lehman and strong corporate balance sheets. We calculate the cost of equity by solving for the yield on equities given aggregate market capitalisation and forecasted consensus earnings. The question arises: can the equity risk premium stay this high? For it to go back down to long term median levels (c. 4%), either the cost of debt has to increase and/or the cost of equity has to decline. It follows that bond prices would decline and/or equities would continue to rally (assuming forecasted earnings, which are not terribly demanding at the moment, do not change materially). Given the clear stance by Fed to keep rates very low for the next two years, it is hard to see the cost of debt rising considerably, which leads us towards equities. At a factor level in this asset class, Value is starting to come back and correlations are declining, making the environment more conducive to stock picking as opposed to an allocation decision. However, given that the economy is in Contraction, the best stocks to choose at the moment are companies have been able to show high, stable returns over the cycles or those in the defensive sectors.” 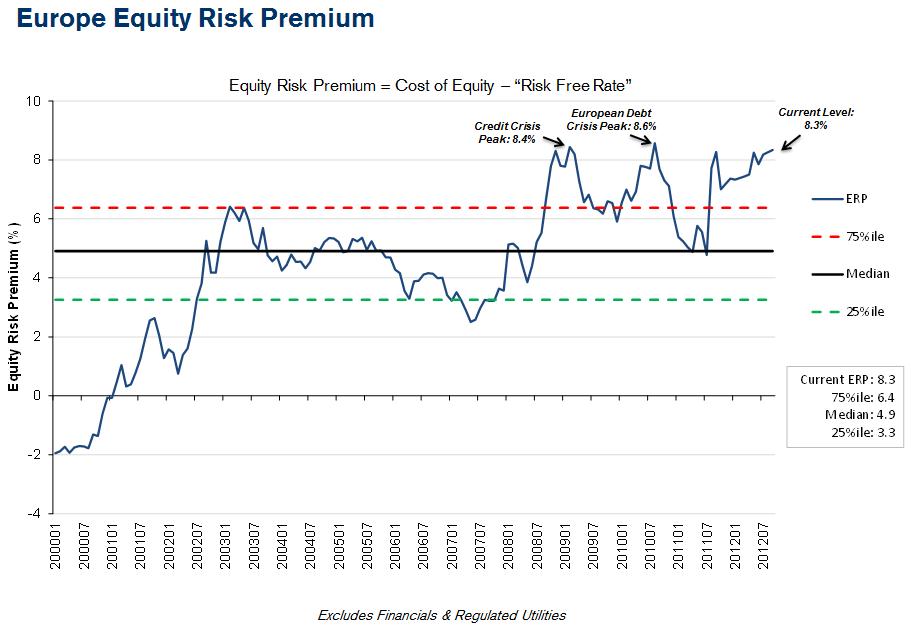 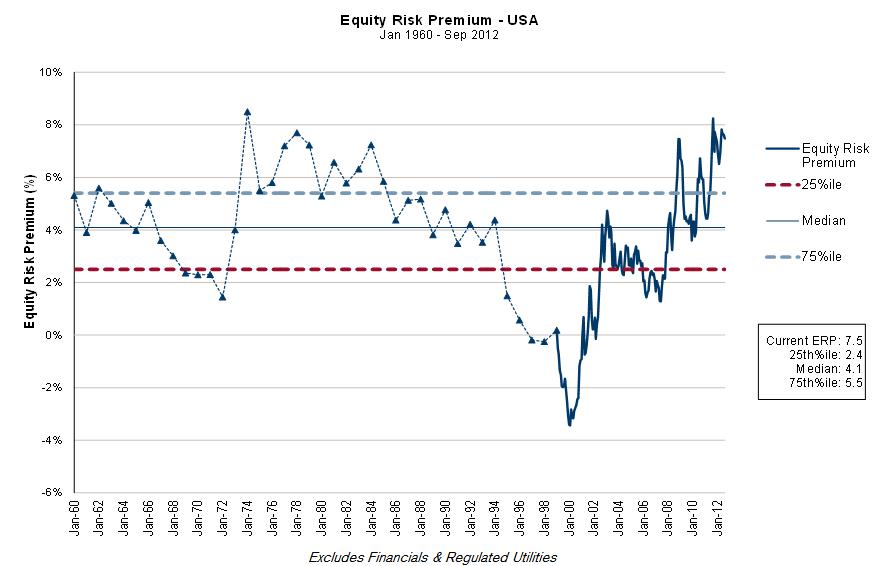 In summary if you believe that Ben-Draghi has reintroduced the risk free rate you need to own the upside somehow or you cannot continue in Fixed income , as at some point rational money will be forced into equities (Vole is cheap if you are not brave enough to be naked, one thing I would like to point is that Mean reversion has started to work amazingly well this month…).