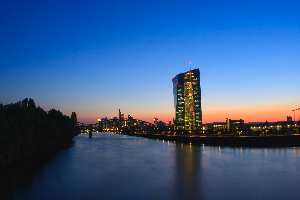 Different members of the ECB state that effects of monetary policy on banks’ profitability have been “broadly neutral”.  Many also refer to papers defending that banks lend more under a negative rate scenario.

Here is a paper they use frequently trying to say that negative rates are good, do not hurt banks and makes them lend more: Why Have Negative Nominal Interest Rates Had Such a Small Effect on Bank Performance? (Lopez et al).

The paper ignores the collapse in net income margin and ROE and even dismisses ROTE (return on tangible equity) to try to defend the idea that banks earnings have not suffered from negative rates.

Looking at Bloomberg earnings from the Eurozone banks (SX7E Index) between 2014 and FY 2018:

The worrying part is that these statements ignore the fact that one of the main reasons why banks’ bottom line has not fallen more is they have almost stopped making provisions on bad loans.

There is no critical analysis of the rising risk in these central bank comments. The ECB and the above-mentioned paper assume a direct correlation between negative deposit rates and lending, without considering the risk of endless refinancing of zombie loans and the higher risk for a lower return embedded in the credit growth. Zombie companies have risen with low rates, and the ECB itself acknowledges the connection between weak banks and walking dead firms in this paper (Breaking the shackles: Zombie firms, weak banks and depressed restructuring in Europe).

It is also worrying that the ECB finds no problem seeing “high yield” companies borrow at an all-time low of 360 basis points spread or that bubbles are forming in the infrastructure and housing segments where multiples have soared in recent years despite the weak growth and modest salary and unemployment improvement.

What I find astonishing is that the ECB does not even show concern about the rise in malinvestment, whitewashing of populism by artificially lowering yields on the sovereign debt of deficit countries, misallocation of capital, and the abomination of charging for deposits to lend to almost bankrupt governments and firms at extremely low levels.

2 thoughts on “Negative Rates Have Damaged Banks, But That Is Not The Worst Effect”