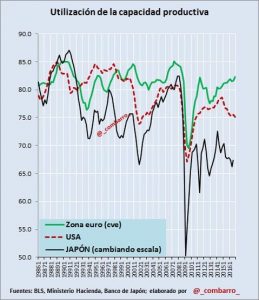 When you listen to some politicians tell us we have to “stimulate domestic demand” as a solution to everything it might sound promising. Since there is poor demand – or at least enough demand to justify the expenses that they consider “adequate” – it has to be “stimulated”.

But what does that mean and why does it not work? Behind these technical words lies the good old cronyist spend. When the only goal is to “stimulate demand” real economic return is forgotten and there is no distinction between value-added projects and white elephants.

Look at the following chart of the US after eight years of demand policies (courtesy of Morgan Stanley), and over $ 24 trillion in fiscal and monetary stimulus. 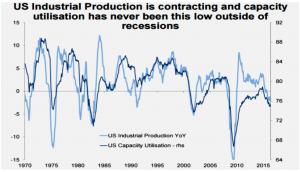 In China, excess capacity is higher than 30% after eight years of massive stimulus , in Europe it reaches 20% and in Brazil the level of industrial utilization is the lowest since 2009. Is it really a demand problem or the result of excess and overstimulation to create artificial demand? It is clearly overcapacity from excess, as shown by Bloomberg .

China launched a monstrous stimulus plan in 2009 that has left more debt, more excess capacity (up 15 points since the launch) and lower productivity. Rouseff, in Brazil, launched a plan to “reindustrialize” Brazil that generated stagflation and enormous imbalances.

And what have we achieved? Poor capital allocation in “strategic” sectors – decided by governments – causes three negative effects:

– Overcapacity costs . A useless bridge is not irrelevant. It has a cost in working capital, in operating costs and leaves the debt behind. All this is covered with higher taxes paid by the productive and efficient sectors. The result: productive sectors are penalized to support cronyism, disincentives to high productivity sectors and subsidization of low productivity sectors. Add that tax increases reduce consumption, and you have the perfect storm.

– Negative economic impact. Not only these plans do not create more employment, but they reduce potential growth. When low-productivity industries receive the covert subsidy of an “industrial plan”, it does not create more employment. Because overcapacity already exists and the workforce in these sectors does not need to increase. Crony sectors do not hire new workers because they already have them, and the only ones who enter the labor force are in low-skilled jobs. Real wages fall or do not rise. The growth potential of the economy collapses because it is perpetuating itself to the inefficient at the expense of the efficient.

– We moved overcapacity from developed countries to emerging markets. What we build to accomodate for “Chinese growth” meets the reality of what the Chinese build themselves to “keep growing.” An increase, according to Deutsche Bank, of $ 18 of debt for each unit of “created” gross GDP.

Does all this mean that no investments are needed? Not at all . Investment is needed when real economic return is evident. The mistake is to think that the “needs” of investment are dictated by governments that benefit from exaggerating the figures.