“It’s not how far you fall, but how high you bounce that counts.” Zig Ziglar

I have mentioned in interviews for a few months that indicators show that Spain is bottoming out and showing signs of improvement. Nobody can deny that in the past I have always doubted the so-called “green shoots”, but this year the encouraging data accumulation is significant.

It is worth noting two things:

Unemployment data and expected GDP are two elements. Spain might leave recession this quarter with an 0.2% growth. That unemployment fell down to 26.26%, 225,000 less, is a positive. Even if we take the data with all the caution in the world and knowing that unemployment is still unacceptably high, it shows that the trend of stopping job destruction, which timidly began to show in April, is now evident.

But there are other data that seem very relevant. The Purchasing Managers Index was 50 in June, which is the level at which the economy begins to approach the possibility of expansion. Bank deposits have also increased after years of decline, rising 0.46% to 1.48 billion euros in June.But the most important data-point for me is the strength of exports, both in volume and margin for companies, showing how a country can improve dramatically without falling into the easy trap of devaluation.Minister Luis de Guindos this week highlighted the importance of the long-term internal adjustment conducted by Spain. It is very important because, unlike the devaluation of the currency, it does not create a disproportionate increase in imports and inflation. A more durable and long-term positive effect. 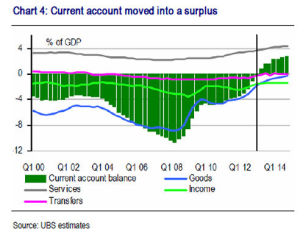 Spanish exports have reached a record high absolute and relative to Europe, but our current account balance has not deteriorated, in fact, it has improved massively to be in surplus.

This improvement is not only due to the much needed decline in internal demand. Spain does not need more wasteful infrastructure spending. The improvement in exports and margins show a combination of entrepreneurial effort and commitment to value.

Another important factor to note is that corporate debt has fallen to 2006 levels and that, following general declines in recent years, the country has started to see large multinational companies post better figures in Spain (IBM, L’Oreal, Carrefour).

Where should we focus attention to trust this timid recovery? 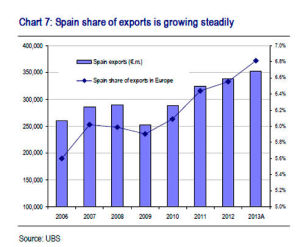 Consumption continues to fall. It is essential that the government understands that disposable income should improve, not through forced wage increases, which would lead to cost inflation, lack of competitiveness, unemployment and prolonging the recession, but cutting taxes. It is the only way to improve consumption and revive the economy. BBVA’s report “Consumption Outlook First Half 2013” clearly shows that importance.

Excessive debt and deficit. The fact that there is no pressure to reduce the deficit below 6.5% in 2013 and 5.8% in 2014 does not remove the risk that such amount of new debt creates, more than 130 billion euro. It involves an enormous drag on an economy here debt already exceeds 90% of GDP. Because the current environment of low interest rates, investor appetite and moderate risk premiums may change in a global economy.

Administration reform and adjustments . The government emphasizes that the structural adjustment was 4 percentage points of GDP and 300,000 public jobs have been cut, but spending on public wages has not dropped significantly and the weight of public expenditure is still extremely high (almost 50% of GDP including public enterprises). Relaxing the reforms has an immediate negative effect on an economy as fragile as the Spanish. New issuance of debt (€ 136 billion) and net requirements (€ 76 billion) continues to be at record highs, almost four times higher than the 2005-2007 average. If Spain’s rating is lowered, the castle could crumble.

Non performing loans will continue to rise, probably to 13% due to the recognition process of refinanced loans, which continue to hinder the credit market, but the Spanish banking sector is no longer a danger of being a black box where no one knows what is hidden. It has carried out a process of transparency and capitalization unlike any other European countries.

The energy reform has raised concerns among investors about the risk that the cuts are extended and perception of legal insecurity. The fact that Minister Soria has discussed with investors, and openly acknowledged the issues of cost and overcapacity in Spain is an important initiative that should be repeated often for the government to understand the concerns, opportunities, risks and consequences of its actions.Spain has made ​​progress, but is far from healed, and has lost 10 positions in the ranking of countries with more economic freedom according to the Heritage Foundation primarily due to the tax increases. Now it needs further reform, lowering taxes and liberalization to recover those ten positions and as many more.In the market I perceive genuine interest to see Spain prove to be the first major success of the so-called “austerity” in Europe, which is not austerity but fiscal prudence. Spain is proof that the best solution to correct the excesses of massive infrastructure spend and real estate bubble is internal adjustment. Germany proved it with its “Agenda 2010” launched in 2003, which has helped unemployment fall down from 11 to 7.2%, get the social security system in surplus and the public accounts from a 4,8% deficit to an impressive 0.2% surplus.

I sincerely hope Spain does not relax its commitments thinking it has done enough, and shows what everyone says in London. When Spain does well, it rocks.

3 thoughts on “Spain, Bottoming Out”