“The real goal should be reduced government spending, rather than balanced budgets achieved by ever rising tax rates to cover ever rising spending”. Thomas Sowell 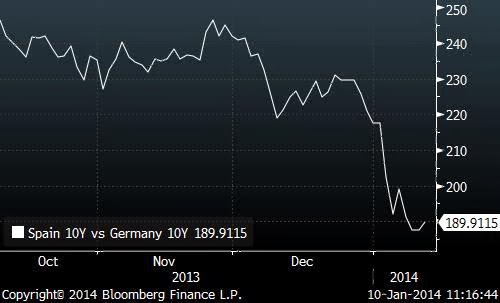 Spanish bond yields have fallen to pre-crisis levels despite debt to GDP reaching c100%, a deficit that will be above the target 6.5% and refinancing needs of c€224bn in 2014. The “Draghi put”, added to much better comps on unemployment (fallen by 147k in 2013), consumer spending (+2% in December) and added to expectations of an 0.5%-1% growth in GDP have helped.

Prime Minister Rajoy will be in Washington (13 and 14-January). On Monday he will meet with Christiane Lagarde just a few days before the IMF releases the update of its 2014 growth forecast. The IMF could raise its forecast for Spain from the current +0.2%. On Tuesday, he will meet with the US Chamber of Commerce.

I read different analysis of Spain’s growth potential. Among all OECD countries, Spain is the only one that shows more divergence between expected growth (+0.5-1%) and its potential (+3% according to BBVA, Goldman Sachs and Merill Lynch). This is the opportunity cost of holding on to the 2004 model of state intervention and bureaucracy.

I estimate Spain’s growth for 2014 at 1% and assume 250k net job creation, but this is far away from its potential. Only by laying out the red carpet to job creation and improving the opportunities to do business, Spain would attract direct financial investments of 50 billion euro and would create much more new net jobs.

By lowering SMEs and self-employed taxes, the UK did not only increase its revenue collection by 24 billion pounds, it also reduced the unemployment rate to 7%… being a net receiver of immigration. The formula: “business is great” and low taxes. Meanwhile, in Spain, we keep trying to hunt the unicorns of  “recovering tax revenues” and telling ourselves that “we don’t have a spending problem”.

At the peak of the real estate bubble Spain never collected more than 412 billion euro of tax revenues. However, it spends above 70 billion euro more than this historical high tax receipts of 2007, which will never return. A minimum of 30 billion euro per annum of higher expenses than bubble-peak revenues even if we deduct aid to banks and one-offs.

I talk about it in my book “Viaje a la Libertad Economica” (“Journey to economic freedom”). In Spain, tax revenues have not collapsed because of fraud or the black economy, but due to the enormous dependency on construction and civil works which reached almost 20% GDP including services and grids for a demand growth that never arrived. A bubble of overcapacity to inflate artificially the country’s GDP.And this GDP, artificially increased by “stimulating internal demand” brought as a consequence a 300% of debt.
The problem is such inflated GDP figure (c20% according to independent analysts) is the same GDP that is used to tell us that the country collects less taxes than the other countries.
Using ratios on the grounds of an artificial GDP to justify bubble spending and confiscatory taxes. It is the same subterfuge of me selling to myself something that I don’t need and I can’t afford, with debt, and then say that my business is growing, justifying by this way an unacceptable spending level.Spain’s 2014 budget doesn’t correct that spending problem yet, and public spending remains above 2007 levels, meanwhile families’ disposable income and economic activity has fallen to 2004 levels, being optimistic. It’s “the public spend aristocracy”.

According to the 2014 Budget data Spain will be spending 10 billion euro in subsidies; 23 billion in “coordination and finance relationships with territorial authorities”; 690 million in State foreign action; 497 million in development cooperation; 131 million in “cultural diffusion abroad”; in “peripheral State administration” 275 million; in “news coverage” 55 million; another 83 million in meteorology (yes, I swear); actions “to prevent climate change” another 42 million; official cars spend raises 1.6% to 240 million; the mutual healthcare, which is parallel to public healthcare, means another 2 billion. Yet we hear that there is no scope for further cuts.But the problem is that we don’t give solutions for the two problems which are obstructing the economic recovery:

However, economic activity and disposable income have fallen to 2004 levels. Instead of considering that spending must be adapted to the economic cycles and that prosperity always had come from saving, we start to thinking that an excessive spending problem will be fixed with more spending.
To spending there is always a reason, the “position rent” is created. Once this bureaucratic entity is created  justifying it is easier than restricting/cutting it. Look at Spain’s loss-making public companies. Only four out of 4.000 have been closed.
However, there is never a margin to lower taxes and boost the economy. There is nothing more permanent than a “temporal” raise of taxes. Then, when the country gets into depression, the “solution offered” is more public spending as the “way out of the crisis” which has been created by excessive spending in the first place.
Everyone sees the enormous potential of Spain. Growing 1% in 2014 its fine. Thinking that this is enough and we don’t have to reduce more superfluous spending is dangerous.2014 will be much better than consensus estimates. I don’t doubt it. But it could be much better. There is a huge potential and, if Spain wants, it can surpass it.
Further read: “Spain, bottoming out“.