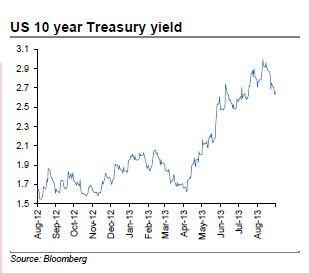 One of the perverse government incentives that we have always discussed in this column is the policy of kicking the can forward. Governments relax the objectives of debt and deficits, introduce monetary expansion measures, cut interest rates and what happens?.  They exceed all limits and debt grows faster. As a magic formula to resolve a balance sheet crisis it is simply not working. Government spends more, debt continues to soar and the citizen gets buried in taxes. Thank you for your money. Look at the United Kingdom, Japan and the United States. Financial repression has only encouraged more excessive borrowing.

The mantra that is repeated again and again, “now is not the time”, “we have to borrow more”, “the important thing is to grow” simply does not work. It is not a matter of growth. As we commented two weeks ago, in the past five years, the G-7 ‘spent’ $ 18 to generate $1 of GDP.As I expected throughout the negotiations of the fiscal cliff in late 2012, it was only a matter of time until the US exceeded the debt ceiling. Indeed, this might happen in October. The situation is so perverse that the government spending machine accelerated ahead of the deadline like the car in the final scene of Thelma and Louise. In less than four months in 2013, the Obama administration has added 300 billion debt to the system. That, after raising taxes and introducing budget cuts. And now, as the deadline approaches, President Obama has the audacity to declare that the government “will not allow to be blackmailed” . It is a superb tactic. First, full throttle spending, exceed all limits, despite the economy growing and tax revenues helping, and then ask for more spending. Like a child that says “if I don’t get more sweets I will stop breathing”.Amazingly, in 2006 Obama, then senator, voted against raising the debt ceiling. Seven trillion dollars of debt afterwards, he seems to see no problem in lifting it.

It’s worth watching this video from his 2008 campaign and what he said about raising the debt ceiling: http://www.youtube.com/watch?v=ydZTHPkOnvE

Since 2001, the debt ceiling in the United States has been ‘raised’ 13 times, which has led to an accumulation of additional debt of 10.4 trillion.

The main mistakes we usually read about the US debt ceiling are: 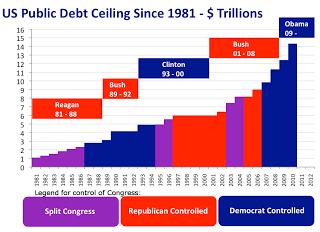 The debt ceiling problem in the United States will not be the same now that interest rates are rising, the Fed has had to revise down their growth estimate for the economy and the risk of a new fiscal cliff in a few months looms again. Even if yields are low and demand is strong, a deficit of close to 800 billion and a debt of 101% of GDP do not improve with the economy growing just 2 to 2.2%. The U.S. must tackle immediately its spending spiral .

All debt ceiling increases in the past have been accompanied by more and more deficit spending. Kicking the can forward has worked as interest rates fell. Now, the risk of ignoring the accumulation of debt and keep spending is too high, as is the case in the UK or Japan, the other kings of the money printing press.  Because there is only one way for interest rates to go. Up. The perverse incentive of “debt does not matter”, matters in the end. A lot.