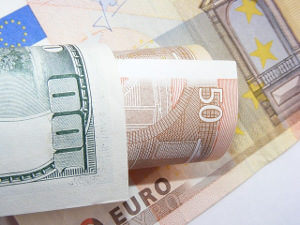 The ECB faces the Devil’s Alternative that Frederick Forsyth mentioned in one of his books. All options are potentially riskly. Mario Draghi knows that maintaining the so-called stimuli involves more risks than benefits, but also knows that eliminating them could make the eurozone deck of cards collapse.

Despite the massive injection of liquidity, he knows that he can not disguise political risks such as the secessionist coup in Catalonia. The Ibex reflects this, making it clear that the European Central Bank does not print prosperity, it only puts a floor to valuations.

The ECB wants a weak euro. But it is a game of juggling to pretend a weak euro and at the same time a strong economy. The European Union countries export mostly to themselves. Member countries sell more than two-thirds of their goods and services to other countries in the eurozone. Therefore, the more they export and their economies recover, the stronger the euro, and with it, the risk of losing competitiveness. The ECB has tried to break the euro strength with dovish messages, but it has not worked until political risk reappeared. With the German elections and the prospect of a weak coalition, the results of the Austrian elections and the situation in Spain, market operators have realized – at last – that the mirage of “this time is different “in the European Union was simply that, a mirage.

A weak euro has not helped the EU to export more abroad. Non-EU exports from the member countries have been stagnant since the monetary stimulus program was launched, even though the euro is much weaker than its basket of currencies compared to when the stimulus program began. The Central Bank Trap, which I explain in my new book. This shows that export growth is not achieved by artificial subsidies such as a devaluation, but from added value, something that the European Union has stopped looking for.

Escape From The Central Bank Trap explains that the ECB has got itself in a problem that is not easy to solve. The first evidence is that it should have finished its stimuli months ago according to its own plan, but is unable to do it. The second is that, with more than a trillion euros of excessive liquidity, the ECB keeps a figure of repurchases that were clearly unnecessary and that have resulted in the figure of excess liquidity being multiplied by more than ten. The third is that perverse incentives have taken over the European economic policy.

Risks are relevant. This week I had the opportunity to speak at the Federal Reserve Bank of Houston and I explained that the ECB repurchase program exceeds net sovereign bond issuances in the eurozone by more than seven times. Throughout the US QE (quantitative expansion) of the Federal Reserve, it never reached 100% of net issuances. Now that the ECB “reduces” these repurchases to 30 billion euros per month, it will continue to be more than 100% of net issuances.

What does that mean? That the US always maintained a healthy secondary market alive, which guaranteed that there would not be huge risks of collapse when tapering started, because the Federal Reserve bought less than what was issued, paying attention to the market accepting the valuations of bonds and financial assets. By extending the repurchase program, the ECB admits that it does not know if there is a secondary market that would buy European government bonds at current yields.

Ask yourself a question. Would you buy bonds from a heavily indebted state that has stopped its reform impulse with a 10-year yield of less than 2%, if the ECB did not buy them back? Exactly. No.

With more than 8 trillion dollars of bonds with negative yields, the risk of a bubble is huge, because it would lead to large nominal and real losses in thousands of pension plans that only invest in low risk fixed income assets. The interest expense savings that many states boast of, has been largely at the expense of pensioners and savers. The ECB has fallen into its own trap because now it cannot be rigorous with the limit that it established in the absence of a healthy secondary market at these prices.

The Central Bank Trap is also in a Europe that now demands that banks delay and decelerate the clean-up of their balance sheets. European banks accumulate more than a trillion euros of non-performing loans, and the ECB suffers pressure from many states that have not carried out a financial reform like the Spanish one. These states demand a “softened” restructuring of toxic assets. It’s amazing, but we have not learned anything.

Ask yourself another question. What type of investments and businesses are incentivized with zero interest rates that were not viable at 1.5%? The Trap does not let Draghi raise rates, something that is urgent when the ECB is almost 200 basis points behind the curve because the economy will suffer. What kind of economy is so weak that it cannot stand a rise of 0.5%? An economy where zombie companies soar – those that cannot pay their interest expense with operating profits despite low rates. According to the BIS, the number of zombie companies has shot up in the last two years to 9% of the large companies. Imagine the small ones.

The trap of the so-called stimulus plan is what it has always been. Once the period and quantity announced have been covered, the BCE itself is hostage to the perverse incentives it created. We are told that there is no bubble, but the ECB cannot stop its repurchases for fear of a collapse in financial markets. Is it not funny? We are told that fundamentals justify financial and political complacency, but if you mention a 0.5% increase in rates, governments and companies faint. If there is no bubble, it is the ideal time to stop something that no longer fulfills its function of mitigating panic. What we see today in the valuations of sovereign bonds is not normalization of excessive yields, but euphoria generated by a single operator. The ECB. And that always brings negative consequences.

The financial system can not heal if rates are kept at ridiculous levels, as much of the banking industry has warned. Additionally, the ECB’s obsession with inflation leads it to ignore the three reasons why prices do not rise as they would like. The accumulated overcapacity after years of demand and subsidy policies, of 20%. Disinflation from technology and efficiency, which is very positive and democratizes the use of goods and services for all income segments. And third, the aging of the European population, which leads to changes in consumption patterns, in addition to higher taxes on the middle class and families, due to the increase in spending on pensions. Those pension systems also suffer from low rates, because the income from social security payments is invested in government bonds with negative real returns. That is, savings are eroded.

Nobody can say that Draghi has not alerted again and again of the needs of reform. But the mistake of the ECB is that they looked to the US and thought they could imitate the Federal Reserve without risk. In the process, they forgot about reforms, about politicians who only want more debt, and to pay attention to the real demand from the markets. Today, despite the urgency, Draghi cannot get out of his trap.

In my new book, I explain that there are ways to prevent inefficient sectors from forcing the central banks to maintain monetary stimuli and that we are still in time to avoid complacency creating another crisis.