(This article was published in Cotizalia on February 2012 and updated on June 17 for the elections)The exit of Greece from the euro and another default seems almost a certainty. An exit and yet another default.

Putting hundreds of billions into a state that consumes every bailout without tackling the issues of corruption and excess spend, when everyone discounts the inevitable, is a futile exercise and a collective suicide of the European Union. And bailouts have no positive effect on peripheral risk, which is still at levels that were considered “unacceptable” two years ago, despite unlimited liquidity injections. 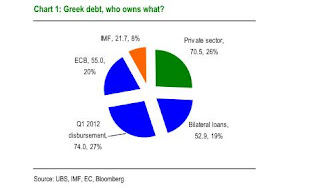 The Greek state, which has more public workers than Spain with four times fewer inhabitants, has wasted bailout after bailout and continues to delay reforms, and now threatens to melt into a political debacle, with some parties asking to re-negotiate the treaty… After receiving the money.

I recommend you read the chapter on Greece from “Boomerang “by Michael Lewis to understand why the money that has been lent will not be recovered easily. But first and foremost, keeping this painful endless drama has no positive effect for Greece. It only helps, delays the pain actually, to the lending banks, especially German and French, which accumulate €138 billion of Greek debt.

No wonder that France and Germany, who keep €57 and €34 billion of Greek debt respectively, are those who insist on keeping the terminally ill in the euro at all costs, although the country’s GDP collapses at an annual rate of 4-6%, and debt to GDP is at 130%.

Rescuing Greece does not solve anything in a country that overspends 8% of its entire GDP every year, while revenues collapse and new expenditures appear every quarter. A bottomless pit in a system, the euro, within which it can not and will not recover.

And the difference between Greece and other European countries, like Portugal, is that its political parties are not accepting to make the needed reforms. The whole system is becoming almost a swindle of promised reforms in exchange for a bailout that never reaches the population (80% of the bailout money returns to the banks to pay interests) but the people do suffer the budget cuts, which happen everywhere except where they are needed (in the bloated political and public system).Rescuing Greece does not work, we have seen it many times. But would it really be a debacle if Europe allows Greece to restructure and exit the euro, staying in the euro zone as a member similar to Poland, with its own currency?. I always say that if Greece formally bankrupts it clarifies and limits the risk, and we can narrow down and isolate the problem.

Europe can not afford to pay the equivalent to 10% of Spain’s GDP every five months to Greece -to the banks, I must say- to get nowhere. 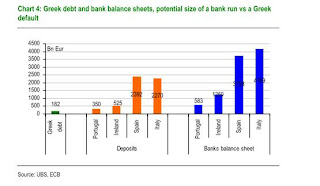 Given a scenario in which Italy has refinanced only 15% of their maturities for 2012 and Spain only 28%, many of the European Union officials fear that leaving Greece on its own would have a huge impact on the credit default swaps of countries.

The problem in Greece is not the problem of Portugal or Spain or Italy. Those are countries who have dealt in the past with significant challenges and dealt with them. Greece has not balanced a budget for decades.

The cost of rescuing Greece would be another 130 billion euros to start, plus more than 200 billion euros that Europe can consider gone. But Greece’s economy needs to deal with a much larger issue. The political debacle and corruption. So bailouts will not help. That is the Greek drama. And the same politicians, even under different party names, will not solve it. Because the bailout system keeps them alive at the expense of the people.Update for the elections

The Greek elections have scared so many countries that we hear cries to “study” the “possibility” of a concerted action by central banks if Greece leaves the euro. Such is the likely contagion impact.

The Greek election analysis has been done in the markets from a Manichean perspective. New Democracy are the good guys and the bad guys are Syriza. I am more interested in the economic impact of any outcome, and as such, I fear that Greek elections, no matter what happens, will deliver a result that will be bad in any way for European debt.

I say this because, either due to another bailout -and Greece has received the equivalent of 115 Marshall plans in the past years -or by default, Greece shows us the fragility of Europe’s debt web and the risk of covering “debt with more debt.” Greece is not the problem, it is part of it, but it can make a big impact on the global economy due to the exposure to its debt from other countries.

For starters, Greece will need a new additional injection of 15 billion within weeks. Remember in April 2010 when former Spanish president said that the country would gain about 110 million euros a year -yes, a year-with the loan to Greece? Now, neither loan nor gain. Donation.

To put it simply:

. If New Democracy wins , the conservatives or a pro-troika coalition, Greece will probably renegotiate the terms of the bailout, yet require a package of “growth support”-translation: debt- in infrastructure projects financed by the EIB. Financed might be a big word, as these will likely not be repaid. The “cost” of this option is estimated at 50 billion to 60 billion euros in 18 months.

. If Syriza -the left- wins or an anti-bailout coalition reaches government, they will threaten with leaving the euro, and option that could cost Europe between 300 to 400 billion euros, according to an analysis of the Eurogroup, or one trillion, according to Lukas Papadimos. And if they stay, they will force a revision of the austerity programs, an estimated cost of 150 billion if we assume the costs of stopping the adjustments and another partial restructuring of its debt.

. Of course, if Greece goes to a third round of elections, which cost the not inconsiderable amount of 35 million euros each, we should be ready for another hot summer.The reality is that no matter who wins, in Greece the scheme of a hypertrophied political state, spending and cronyism between government and party is the only one who does not suffer. And that any cost of the Greek outcome will be funded by additional debt from a Eurozone with fewer resources which finds itself increasingly isolated from international markets.

(This last update was published in Cotizalia on June 15th 2012)

If they were to leave the Euro, it is likely that a new drachma could lose half of its value when introduced. That’s consistent with other episodes of countries abandoning fixed exchange rate regimes – for example during the Asian crisis of 1997/98. A 50% depreciation of the currency means that Greek GDP in euro would be halved too. As a consequence, the debt to GDP ratio would double. This means that, in order to reduce the ratio by one third, our original target to make the trajectory “sustainable”, the haircut needed is now two-thirds. This simply doubles the loss for foreign investors. In the case of a ½ haircut, it would have to become a 3/4 haircut. In this scenario, the estimated cost for the European taxpayer of a one-third haircut is no longer €60.6Bn, but potentially €121.3Bn. The cost for the European taxpayer in case of a 50% haircut is no longer €91.0Bn, but €136.4Bn.Additionally, Target 2 imbalances would have to be added to the bill, this is currently worth 104Bn. We estimate that the total cost for European taxpayers in case of an exit of Greece would be almost four times more, at €225Bn.

eKathimerini reports that a new opinion poll suggests that the Greek elections will see SYRIZA in a face-off against New Democracy. According to the survey, SYRIZA would garner 28% in elections next month, while ND, which co-signed Greece’s debt deal with socialist PASOK but has long pushed for a renegotiation of the terms of the agreement, would get 24%. PASOK would come in third with 15%, according to the poll, which was carried out last week. Other opinion polls put ND ahead of SYRIZA, which are expected to clash in this election campaign.

Worth looking at HSBC’s solid report published on May 23rd on the implications of a Greek exit:

Devaluations can be really damaging for a short term that is already very difficult for the population:

The Greek exit is manageable, but contagion might not:

And the four possible outcomes of the Greek crisis 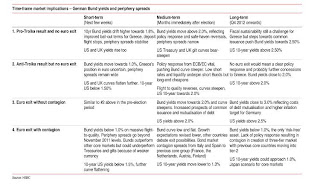 Greece could run out of cash this month, despite its widely heralded second bailout.   http://www.cnbc.com/id/47700847