“A lie repeated a thousand times becomes the truth”. This well-known sentence, attributed to the master of Nazi propaganda, Joseph Goebbels, could also serve to illustrate the great deception of the alleged public austerity in Europe. Since the outbreak of the debt crisis, it is widely repeated that Germany has sought to impose on the rest of the EU partners an adjustment plan focused on cutting costs and implementing structural reforms that would foster economic growth.

This strategy has been harshly criticized by many economists and by the Southern European countries, the weakest in this crisis, with Greece leading the critics. In fact, analysts, politicians and union leaders blame all the current problems of Europe, including the Greek default, on the imposed austerity measures. After the recent French and Greek elections, the critics of Merkel’s strategy have begun to gain notoriety, to the extent that the European summit to be held on Wednesday will focus more on how to boost growth through government spending (stimulus) than on further cuts in policy to reduce the deficit and debt burden.

However, official data (Eurostat) shows that the much-touted European austerity is today little more than a myth. The Greek default was not due to the demanded cuts but due to the decision to keep a bloated state unchanged. Likewise, the evolution of spending, deficits and public debt in the euro area shows that the austerity only exists on paper. Neither governments have stopped spending well above their means, nor have they undertaken structural reforms to enable their economies to improve their productivity and grow solidly in the near future.

The most striking figure, amid all the rhetoric against the cuts, is that public spending in the euro area as a whole has grown by almost 7% between 2008 and 2011, reaching 4.65 billion euro.

In the South of Europe, those most affected by austerity in theory, the evolution is similar: Public spending in France rose by 8.6% since 2008, in Spain, 4%, in Italy, 3%, in Portugal, 7.8%, while in Greece, despite all the announced cuts, spending fell just 8.5% over the 2008 level, although today its public sector continues to spend 2% more than in 2007 (just before the crisis).

In essence, no European country has managed to reduce their public spending to 2004 levels, a few years before the start of the international crisis, which itself could be considered as an exercise in austerity. Not at all. The following chart summarizes the evolution of public spending in these countries, measured in nominal terms at current prices. 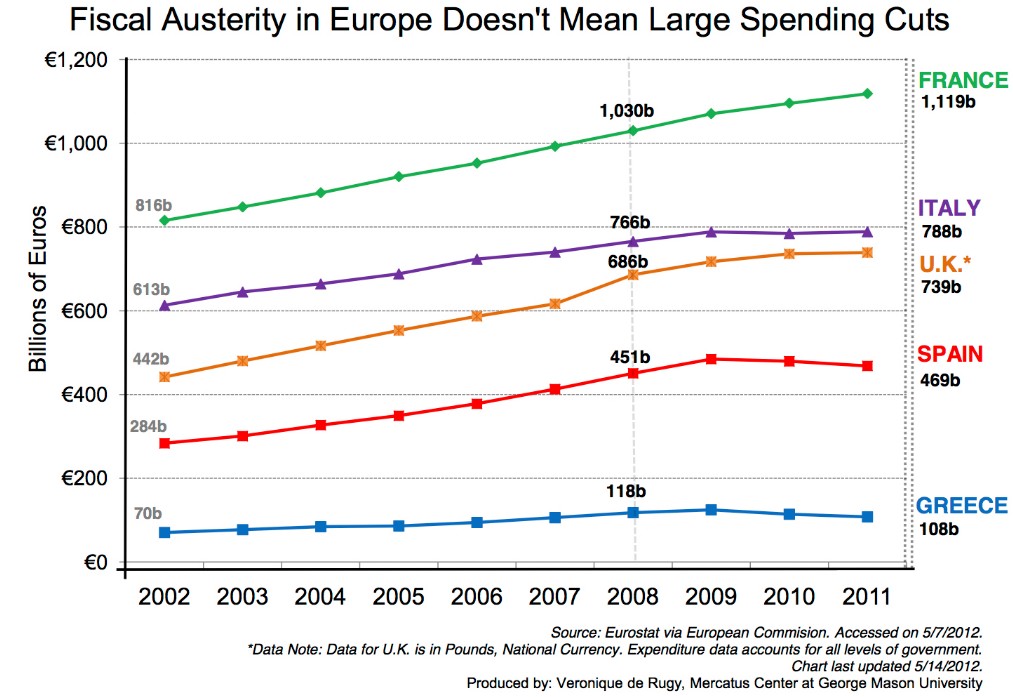 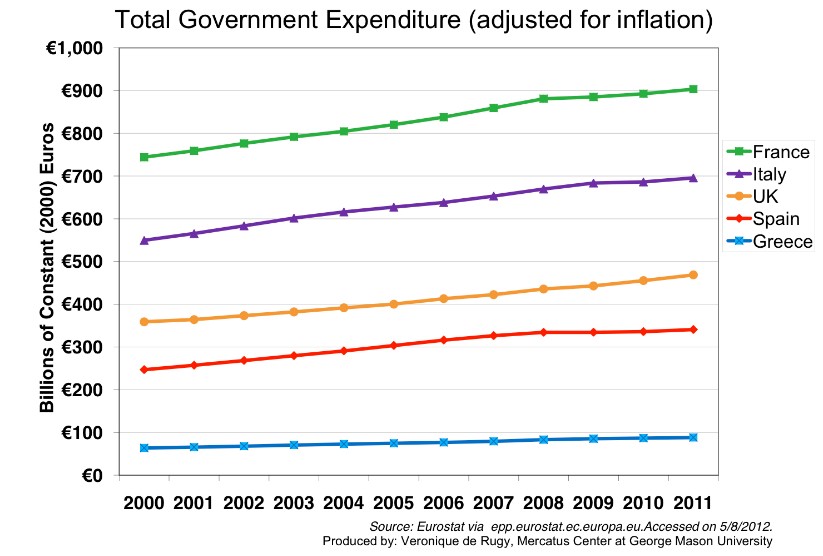 In fact, the situation hardly changed if we look at the evolution of public spending in real terms after inflation.

As we can see in the graph below, the public sectors in Spain, Greece, Italy and Portugal, the four southern European countries most affected by the debt crisis, are still spending more than they earn. Only a few countries in the North and East of the continent (exemplified here by Germany and Estonia) have maintained their public at deficit under control during these years of crisis.

Obviously, if the deficit is out of control every year, public debt will continue a worrying upward trend. As we can see in the image below, all the countries of southern Europe have public debt figures that are much higher than that held at the beginning of the crisis. Even Spain, which began with a very reasonable level of public debt of less than 30% of GDP, is now touching 70% and could end 2012 above 80%. 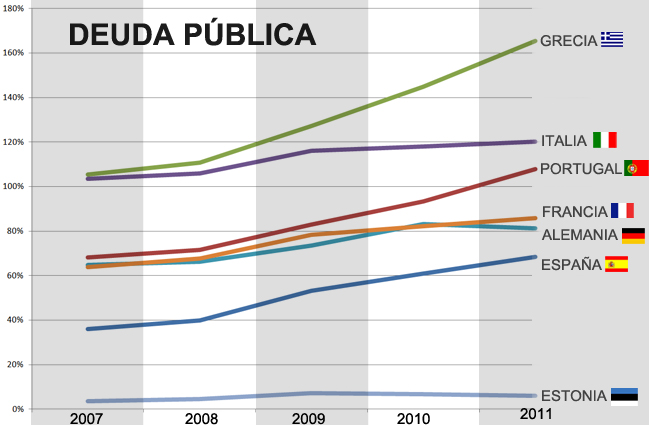 Greece, meanwhile, is at levels close to 200% and Italy is moving steadily to 130%. With these levels of debt, it is logical to see international investors unwilling to buy more South European government bonds, and the to see the CDS and spreads versus the Bund soar. But governments and political parties continue to blame the “evil speculators” or the unfairness of German taxpayers, strangely reluctant to lend more money when nobody else wants to either.
Chart above shows public debt growth.
Along with the complaints about unreasonable “cuts” allegedly “imposed by the markets” (or the Germans), in recent weeks we have seen a growing public debate that wrongly puts austerity and growth as two opposite concepts. They are not. Austerity is the antonym of waste. In fact, recent history shows that more government spending does not foster growth, and does not help to get out of economic difficulties.

The current crisis began in 2007. From then until late 2011, the four southern European countries we are considering implemented aggressive public “investment” policies that Keynesian economists would qualify as clearly expansionary, with deficits close to or above 10% for several years. If this theory were true, Greece, Portugal and Spain would have already recovered and the growth generated by the “virtuous circle” created by government spending would be paying their debts. But none of this happened. 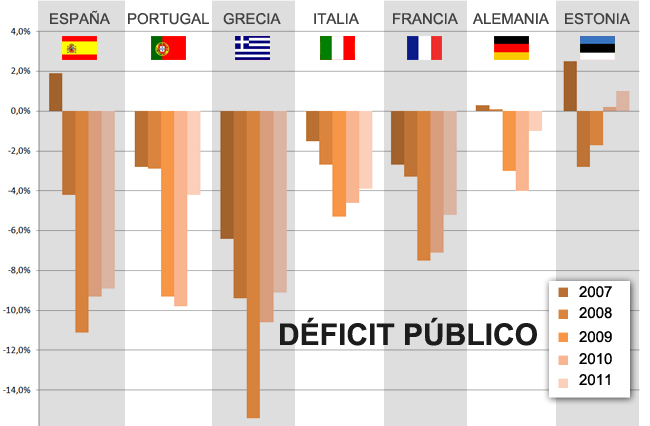 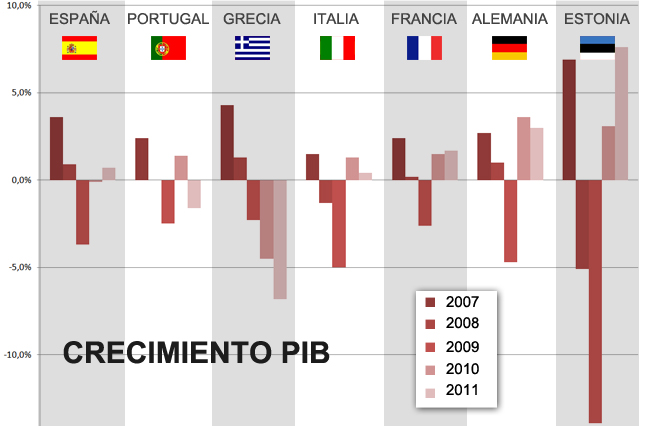 Meanwhile, Germany and Estonia followed the opposite path and imposed austerity. The result is that both countries had a strong relapse in 2009, with the political cost that it entails . But they are recovering faster and now have much stronger economies. Meanwhile, in Spain, the “Plan E” of investment in infrastructures, an enormous waste of public funds with its vast implication on cost of borrow and deficit, and other public spending measures have failed to stem the crisis. But the message currently repeated over and over is that it takes even more government spending, for much longer, to foster growth. But… For how long?

Chart above shows growth in GDP 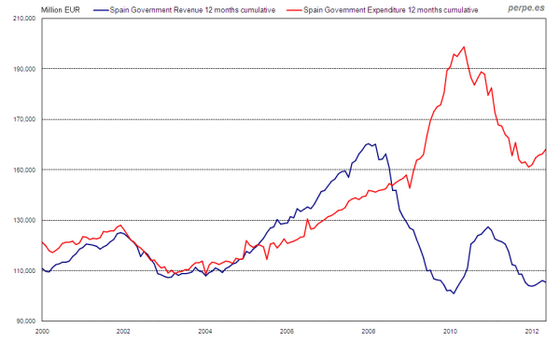