I remember a few years ago in Italy, amid a corruption scandal, that a local politician was asked about an apartment in Rome that he had been given illegally, and he replied: “If I found out who it was that paid for the apartment, I will sue him”. This episode springs to my mind when I read about the scandals in Spain and the justifications from the side of different politicans.

According to the World Bank, corruption can cut up to 0.5% of GDP of a country. Studies of the same entity calculate the impact of corruption -at every level- at up to 2% of GDP in OECD countries.

In a meeting organized by Transparency International in Lisbon, in June 2013, speakers commented that:

No wonder that in such a situation, capital flies away.

Too much government, too much power, too much corruption.We need absolute transparency and strong principles, not consensus. Leadership. Reduce the disproportionate access of government to citizens’ pockets is part of the solution, precisely because that is the only way to ensure the survival of essential services that people need. If not, bankruptcy will destroy everything, the superfluous spend and the minimum welfare.

Consider the risks of an institutional collapse in Spain when debt has soared to almost 90% of GDP. It would mean bankruptcy of the Social Security and pensions, which are up to 90% invested in sovereign debt, and of banks, that accumulate 241 billion in government bonds and public loans … And that would lead to the collapse of SMEs and households.

It is no coincidence that this perception of growing corruption happens when there is a crisis. And this concern about rising corruption happens also at the same time as we see increasing interventionism and government spending rocket to levels of 49% of the EU GDP, which is supposed to be spent precisely to combat this crisis.

After wasting hundreds of billions, more than 2% of EU GDP in five years, people are suffering the consequences of what seemed a very attractive system at first, centralized government control and interventionism. “Socialism is a great idea until you run out of other people’s money” as Margaret Thatcher said.The naughty money helicopter stopped allocating money to all, even if it was very little, and now it only generates debt. We have given up freedom in exchange for security and now we have neither liberty nor safety.

Corruption is tolerated -even encouraged- when the majority gets something from it, even if it’s small. But when the lottery of welfare, subsidies and crony-ism stops paying, we see the citizens’ indignation. That is why we have to restore the principles of austerity, meritocracy and hard work and stop thinking that 2005 will come back and the party will start again. Because we’ve never lived more prosperous periods than when economic freedom was at a maximum level and when there was minimum intervention. In intervened economies, the average disposable income is up to 8 times lower than in economies with high economic freedom.

Since intervention and public expenditure policies have taken over in large economies, we have seen inequality soar to the highest levels since the late 70s, when it had fallen to historic lows in the 90s and early 2000s thanks to the improvement of economic freedom (Gini index).Money is best kept in the pocket of citizens.

However, many complain when some of us propose to reduce spending and lower taxes, which have been the policies that have created wealth and prosperity in the past. As if the money that is wasted wasn’t ours.

Believing a mismanagement problem will be solved with more public money is not only naive, it’s dangerous. And to believe that a corruption problem of a society used to welfare paternalism is solved with “other politicians” whose incentives are the same as the current ones, is simply suicidal. 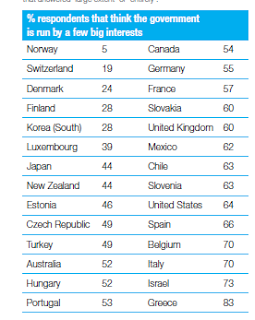 Corruption and impunity generate uncertainty and fear. Legal uncertainty increases to feed the predator state, which argues that corruption is “very low” and “irrelevant” or worse, that it “happens everywhere” … and meanwhile investor simply disappears. The EU is in danger of becoming uninvestable.

We need to put above all the principles of freedom and honesty, prove leadership and forcefulness, not hide ourselves like ostriches in the consensus of the weak. And we have to take advantage now that perceived risk is low, to undertake a real catharsis .Do bond yields rise due to corruption? Not in the OECD, although it is evident in emerging markets. The reason is that in emerging countries there is no strong perception of institutional stability, which is taken for granted in the OECD. Therefore, bond yields only rise when the government that has tolerated corruption becomes under serious threat (think Italy, Spain…). Credit risk is not triggered by scandals. These are only symptoms, but very relevant because they lead to excessive spending, lack of fiscal responsibility and the end result, which is massive debt, weakness and possible bankruptcy.

The problem of corruption-and its consequences-is that it becomes a serious financial problem . It costs money when the country loses institutional trust and then, like emerging markets, bond yields soar. Cornell University estimates between 300 and 350 basis points higher in cost of debt. It also leads to capital flights and falling direct financial investments.

Corruption is not caused by some politicians, like aliens who have fallen from Ganymede. They reflect a society that tolerates and encourages patronage as a way to prevent free market, competition and meritocracy.

A few months ago the journalist John Müller gave an excellent talk in Madrid in Cunef showing the front pages of his newspaper “El Mundo” since the late 80s. Two things surprised me:

Many say that this is an exaggeration and that it’s no big deal, that Spain is financing itself very well and there are no risks. Imagine how funding would improve without this cancer.

Abandoning principles and hiding the problem has worked sometimes, we cannot deny it. But now there is no free money to finance the party. Now we have to show leadership, strength and forcefulness . For the good of all.