(This article was published in El Confidencial on January 4th 2013)
“A great civilization is not conquered from without until It had destroyed itself from within” Will Durant. 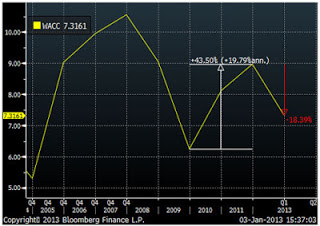 Happy new year everyone! All is well! That’s what markets say. The speculators of yore are now astute investors anticipating the recovery … Or they fear inflation. Rather the latter.

We are in the phase of complacency that, just like every year, ignores the accumulation of debt and the creation of fake money as uncomfortable anomalies, until it explodes.And it does, make no mistake. What we do not know is when, but we know how. Abruptly and painfully. We’ve seen it many times since 1789, when France was trying to solve a problem of spending and debt by printing paper money without justification.

“I see many things that scare me, but I keep dancing while the music plays,” one Spanish manager.

There are positive indicators that deserve to be remembered. The global industry has entered an expansive phase for the first time since May 2012 and the indebtedness of Spanish companies, for example, has dropped by 4.6%. The private sector still works.

But these positive elements do not mask that the hole of debt is growing faster than any indicator of GDP, corporate earnings, fiscal revenues or industrial growth. The hole in the U.S., for example, that we talked about in my article “The Fiscal Cliff that Europe shouldn’t copy”, takes us to March with the certainty that the debt ceiling will reach and exceed 16.4 trillion dollars. It is a formula that we can not copy for three reasons:

– The policy to increase and monetize debt, as we have seen in the U.S. or UK, does not reduce the need for massive cuts or solve the problems of growth. In fact, it is precisely the dependence on a debt pyramid model that creates the bubbles that then lead to crisis and cuts. If we don’t allow the system to clean up, we perpetuate problems. Since 1981, the United States has increased its public debt by 1560%, while the population grew only by 35%, to generate an increase in real GDP for every dollar of additional debt of less than 0.24% (“The Central Bankers’ Potemkin Village “, Hayman Capital). In the rest of the western world the figurs are similar. All eurozone countries have a public debt that exceeds two to three times its revenue. A spending pyramid with a diminishing base to support it. 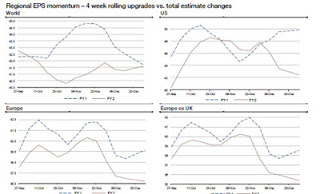 – The credit and stock market bubble is created by low interest rates and printing money which generates an “illusion of growth” leading to poor invest decisions, increasingly short term and risky.

– The middle class disposable income and corporate profits are reduced by tax increases, lack of productive investment, economic uncertainty and systemic risk. The recovery is delayed by “trying to prevent” a drastic solution to the debt hole with clear market principles. Bankruptcies where needed and conversion of debt into equity where possible.

The risk of bankruptcy is essential for the market to function, to reward the good managers and clearly establish the penalty for bad investments. However, when we add the placebo effects of printing currency, low rates and bailouts we destroy the principle of credit responsibility, generating perverse incentives, exaggerated risks and the credibility of the entire system sinks.

But central banks continue to destroy currency and add borrowing … For nothing, because they forget that the population and GDP will not grow enough to finance this spending spree we created. 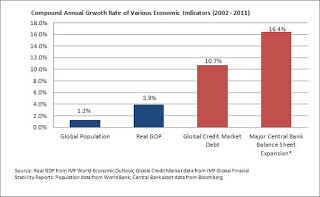 Divergence between the economy and financial markets

Many readers mention the strong performance of the stock market as a leading indicator of the recovery. In my opinion, stock markets and risk assets discount four effects:

What is it that the market fears and therefore generates volatility?
The oft-repeated “do not fight the central banks” is true, but we sometimes forget that governments and their banks are reactive, not proactive, and despite calls for “unlimited measures”, resources are not unlimited, because it is debt and paid by citizens in a scheme with less ability to lend, fewer taxpayers, more dependent and decreasing disposable income.

What markets fear is that fundamentals remain poor. The absence of aggressive negative news does not reduce the accumulation of credit risk, the banking problem and deteriorating corporate earnings.

The Spanish case is paradigmatic. On one hand, non-performing loans continue to rise , an estimated 35 billion new provisions are needed in the banking system (JP Morgan), the deficit increases, company profits stagnate … the bad bank will have a balance sheet equal to 5% of GDP and 92% debt. There is no party.

However, the fall in bond yields drives a stock market which remains one of the most indebted in Europe, and the absence of negative news supports this momentum. The private sector is doing its homework slowly. Is it logical to think that bond yields will remain low this year if Spain has to refinance 230 billion euro? Moreover, when all the world’s states emphasize maintaining public debt at low rates, will investors remain in stock markets … or will they go back to debt?

When safe havens becomes more expensive than what you want to protect
Capital preservation through safe assets is impossible with global financial repression.

The problem for investors is that global monetary policy pushes risk up as the economy deteriorates. The “shelter”-keep-the money deposited- is too “expensive” when currencies are destroyed and rates are manipulated. So this market becomes a good bet but a bad investment, because we are creating bubbles which are pricked faster and faster, as the illusion of “value” is diluted as fast as it is created. There is no value when returns remain below the cost of capital. We must avoid bubbles … or understand how they are created.

How are bubbles created?

When all states are determined to create inflation and inject liquidity unsupported by fundamentals, it encourages a bubble in the beneficiaries of that cash: political spending and zombie companies, those that should have gone bankrupt but remain “alive” with eternally renewed loans because realizing a loss would create too big a hole for the banks. It discourages cleaning the system, because “too big to fail” becomes the norm. No need to be efficient and productive, companies just have to be fat. Not strong, but fat.

When the unconventional monetary policies become standard bubbles are created everywhere at both ends of the risk spectrum, from U.S. and German sovereign  “low risk” countries side to companies and troubled states in the “high risk” end. That zero percent interest for American or German bonds is as unjustified as receiving only 5% coupon from bonds of companies or countries at the brink of collapse. And this creates an “oversupply” of debt with negative marginal returns. Economies do not improve.

Let’s not spoil such a “succesful” formula. With it comes an excess of risk that leads to extreme volatility in financial markets that are not supported by fundamentals.The central banks, of course, do not go bankrupt, because they get paid by us and our grandchildren. They perpetuate their “unconventional” actions that are now common, ruining its citizens via inflation and devaluation. But while supporting excessive government spending and stock markets, they create a “feeling of wealth”-I love that term-, when nothing really happens. And kick the can forward. Yet central banks may lose credit and make their paper worthless. We seem to be in that race.

These bubbles are pricked with a “demand shock.” When the flow of new participants disappears or dries  up and competition for capital becomes fierce. And when it happens, it is very aggressive. Then the pyramid scheme stops working altogether, … bummer!. Enjoy it while it lasts.