The Turkish Lira collapse should have surprised no one. Yet, in this bubble-justifying market, it did.

First and foremost, the lira decline has been ongoing for some time, and has nothing to do with the strength of the US dollar in 2018

The collapse of Turkey was an accident waiting to happen and is fully self-inflicted.

It is yet another evidence of the trainwreck that monetarists cause in economies. Those that say that “a country with monetary sovereignty can issue all the currency it wants without risk of default ” are wrong yet again. Like in Argentina, Brazil, Iran, Venezuela, monetary sovereignty means nothing without strong fundamentals to back the currency.

Turkey took all the actions that MMT lovers applaud. The Erdogan government seized control of the central bank, and decided to print and keep extremely low rates to “boost the economy” without any measure or control. 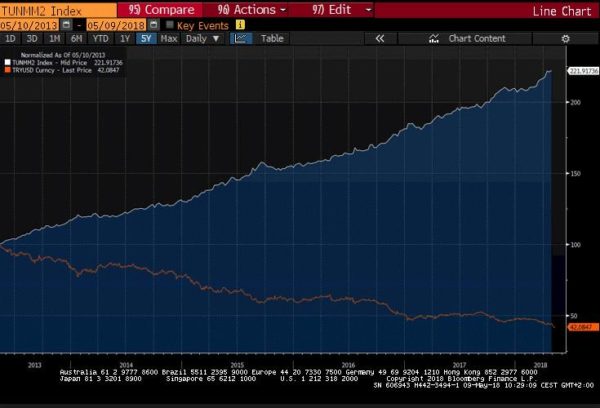 Turkey’s Money Supply tripled in seven years, and rates were brought down massively to 4,5%.

However, the lira depreciation was something that was not just accepted by the government but encouraged.  Handouts in fresh-printed liras were given to pensioners in order to increase votes for the current government, subsidies in rapidly devaluing lira soared by more than 20% (agriculture, fuel, tourism industry) as the government tried to compensate the loss of tourism revenues due to security concerns with subsidies and grants.

Loss of foreign currency reserves ensued, but the government soldiered on promoting excessive debt and borrowing. Fiscal deficits soared, and the rapidly devaluing lira led to a rising amount of loans in US dollars.

This is the typical flaw of monetarists, they believe monetary sovereignty shields the country from external shocks and loans in foreign currencies soar because no one wants to lend in a constantly-debased currency at affordable rates. Then the central bank raises rates but the monetary hole keeps rising as the money supply continues to grow to pay for handouts in local currency.

Now the risk is rising for the rest of Europe.

On one hand, the exposure of eurozone banks like BBVA, BNP, Unicredit to Turkey is very relevant.  Between 15% and 20% of all assets.

On the other hand, the rise in non-performing loans is evident.  Turkey’s loans in US dollars account for around 30% of GDP according to the Washington Post, but loans in euro could be as much as another 20%. Turkey’s lenders and governments made the same incorrect bet that Argentina or Brazil made. Betting on a constantly weakening US dollar and that the Federal Reserve would not raise rates as announced. They were -obviously wrong. But that erroneous bet only adds to the already existing monetary and fiscal imbalances.

Money supply continues to grow at almost double-digit rates, the government’s outlays exceed the diminishing reserves and capital flight starts to be evident as savers and investors fear that the Erdogan government prefers to take the option of capital controls in order to seize complete power than to restore economic credibility with sound money policies.

Like Argentina before, raising rates too late does not calm the market when the risk is capital controls and a bank run. Raising rates to 18% does not encourage anyone in Turkey to keep money in the bank when the risk is to lose all the money. Rates went from 8 to 17.5% and the crisis worsened. It will not stop because of slightly hgher rates.

Because the problem of Turkey is monetary and fiscal. Turkey will need a massive adjustment program and a credible opening of its institutions and markets to attract capital and restore growth. Unfortunately, the route seems to be more government control of institutions, less investment security and deepening the crisis blaming the inexistent external enemy.

Erdogan is fighting against a very dangerous economic foe. Himself.

For Europe, this is a devil’s alternative. Bailing out Turkey will give further control to Erdogan and increase the imbalances of the economy while imposing higher restrictions to freedom.

Not bailing out Turkey, on the other hand, would cause a  much larger crisis than Greece was. Because too many eurozone funds and bank investments have been directed towards Turkey as a way to get access to some growth and inflation. What they got was a risk of capital controls and currency debasement.

The biggest risk for Europe will be to try to cover this mess with some aid in exchange for refugee and border support. Because what is already a relevant risk, but contained, will likely balloon to unmanageable proportions.

3 thoughts on “Turkey Could Create A Larger Crisis Than Greece”