There has been a lot of tough talk between the US and China recently, particularly from President Donald Trump who has called the latter out for unfairly manipulating its currency to retain an advantage in trade.

Analysts are speculating about the potential repercussions of this tension on trade relations and debt holdings between the two nations, but which one has the upper hand when push comes to shove? Fund manager and author of “Life in the Financial Markets“ and “The Energy World is Flat“ Daniel Lacalle holds a different view.

In his blog, fund manager and top 20 economist in the world (according to Derin Cag’s Richtopia), Daniel Lacalle, points out that U.S. total debt is $19.9 trillion, with China holding $1.1 trillion. Japan is actually the largest foreign holder of U.S. bonds since last year as its portfolio has $1.13 trillion of Treasuries while China has trimmed its holdings by $41.3 billion month-over-month in October, bringing its total holdings down to their lowest level since 2010. 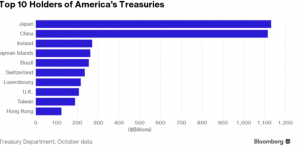 Lacalle provides a breakdown of U.S. Treasury holdings, largest of which is with Social Security at $2.801 trillion, followed by the Federal Reserve at $2.463 trillion and mutual funds at $1.379 trillion. $888 billion is held by the Office of Personnel Management Retirement. Next up is the Military Retirement Fund, which has $670 billion in U.S. Treasuries, then Medicare which holds $294 billion. Foreign holders have a total of $6.281 trillion, in which China owns around a sixth.

On the flip side, foreign institutions’ holdings of Chinese debt is down 1.9 billion CNY in January to 421.75 billion CNY, based on data from China Central Depository and Clearing Co. Although foreign investors upped their stakes in Chinese government bonds by 70% last year to 421 billion CNY, the drop in foreign holdings represents its first reduction since October 2015.

In other words, if a trade or currency war does materialize between the US and China, and the latter decides to dump its U.S. debt holdings, it would not be enough to upend the financial standing of Uncle Sam. As Lacalle mentions, the rest of the holders could absorb those Chinese holdings in just three days. This is in sharp contrast to the prevailing view on Wall Street that says China is on the front foot because of it’s Treasury holdings.

Keep in mind, though, that China continues to put the pressure on by working towards replacing the U.S. dollar as the world reserve currency. It has already managed to put the yuan in the IMF SDR a few years back and continues to respond to allegations of currency manipulation. Still, owning U.S. Treasuries helps keep the Chinese economy afloat by keeping the yuan weaker than the dollar so increasing its stake could work in its favor, on top of the political leverage it brings.

With that, it’s probably not in China’s best interest to dump all of its U.S. debt holdings or a considerable chunk of it according to Lacalle since this would cause the dollar’s value to fall sharply and make the yuan rise in the process. Besides, a large collapse in the dollar could put the global economy back in a crisis, something that would also drag Chinese growth down.

Meanwhile, the U.S. is on track towards increasing defense spending and fortifying its military, keeping in line with Trump’s protectionist views. Although the U.S. imports a significant amount of its goods from China, Trump is also pushing for increased domestic production which could lessen its reliance on its trade partners and therefore dampen demand for China’s exports.

As it is, both countries could have a lot to lose when a trade war does happen but it appears that China could be on the back foot if the Trump administration is able to implement all its planned reforms before shots are fired.