Every January comes with estimates of corporate profits and macroeconomic projections, which are essential to determine whether or not the stock market is cheap or if the economy is improving.

However, every year as well, especially in the past eight years, we witness a very entertaining pattern. Massive downward revision of corporate profit expectations. These have averaged 15% between January and December almost every year.

The mainstream consensus of analysts suffers from the same constant mistake of large international organizations, whose average accuracy in their short and medium-term predictions is less than 26%, as Ned Davis explains in “Being Right Or Making Money”. The error of the “double trap”: Long-term optimism and negation of short-term trends. 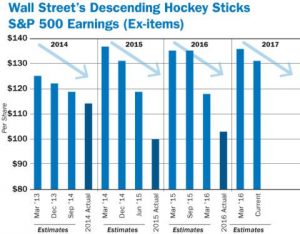 Note the brutal impact on the estimates in eleven months of profits for the very short term. From healthy profit to loss or no growth. But note, in turn, the gradual but inexorable erosion of estimates for the following year. 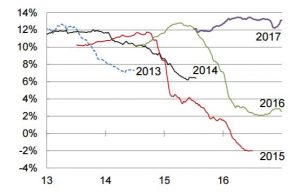 Why is this happening? The “hockey stick” in future estimates is the best excuse to justify blunders.

Ignore for a second the disaster in prediction track-record, and focus in the shape of estimates. Almost always a hockey stick.

Suppose, as with the aforementioned estimates, that we economists have screwed up in the current year. What is the answer? “Oh, but look, next year everything improves.” And, in turn, the next hockey stick is moved to the new, lower, base. But that hockey stick of fantasy future projections, remains. Don´t worry, “next year” will always be there.

There are various reasons:

Mainstream consensus tends to overestimate the positive impact of monetary policy over other risk factors. It is very evident in corporate profits and even more so, in capex estimates. According to Standard and Poor’s, capex predictions have been particularly erroneous.

Since 2012, consensus predicted increases in real net investment, and it fell, very severely in the last three years in particular. As one great US fund manager said: “Come to me with ceteris paribus and I give you zeros salarius”

Analysis houses often introduce large impacts on GDP, consumption, unemployment, and investment or inflation expectations due to changes in monetary policy, without addressing much more relevant trends such as overcapacity, ageing, technology or the real cost of capital. The results are invariably downward revisions, but gradually – little by little, month by month – in order not to look so bad.

Denying business cycles is another mistake. Cycles become shorter and more abrupt as debt rises and money velocity falls. Using estimates where the starting point is simply moved lower and then increased annually, as if there were no cyclical factors that cancel those correlations, is a more than common mistake.

Additionally, the confirmation bias is very evident in these errors in expectations. Assuming short-term mistakes are just anomalies, white noise, that do not change the medium-term prediction, because most of consensus supports the starting premise and it needs to be reaffirmed.

Of course, in order to justify these brutal deviations in short-term estimates, mainstream consensus will use sentences such as “it could have been worse”, “fundamentals have not changed”, and “in the long-term it will improve”.

In order to support the “eternal hockey stick”, there will be seemingly robust studies of regressions, endless Excel spreadsheets and complicated algorithms in which everything appears very scientific until you see that in two or three cells most of the key “inputs” are subjective.

I remember that three years ago I was surrounded by colleagues, former members of the Federal Reserve, when we entered into an endless discussion about business profits and growth in Japan. One of them sent his model of the country and Nikkei companies. It was very complex. Until we found the cell that changed everything. “Expected increase of real consumption from variations in money supply”. Depending on what one decided to input, the country and its companies were still stagnant or booming.

Another magnificent example of the “surprise cell” from those same colleagues came from estimates of US economic growth. “Expected net change in investment from non-financial sectors as a percentage increase in money supply”.

These are anecdotes, but they show that the general mistake in medium-term estimates comes mainly from altering the result to justify the conclusion, albeit involuntary, due to individual prejudices, peer pressure and ideological preferences. There are many studies  that warn of the “pollution” in optimistic estimates, where many of these predictions simply seek to justify an existing policy or strategy, or, in the case of corporate profits, justify valuations that are hardly supported by fundamentals. Any analyst in the world knows that, on average, 80% of the valuation of a stockis explained by the years that exceed the “forecast period” (normally four, maximum five years).

Does this mean that analysis is useless? Not at all.

Analysis has an enormous value in what has to do with the detailed study of factors that affect companies, governments and families. But predictions, especially for more than three years, have to be taken not with caution, but with the certainty that they are contaminated by optimism. To be guided by long-term predictions of economists that deny cycles and are clearly unable to predict the most immediate future is, at the very least, dangerous.

Making estimates is essential for economic analysis. It helps us realize where we are wrong, and act accordingly by recognizing those impacts – positive or negative – we missed, for further analysis. Making mistakes is essential to improve. The problem is to confuse estimates with infallible magic predictions and, even worse, to cover these “hockey stick” estimates with a fake “scientific” layer, when they only serve as an excuse to perpetuate erroneous policies and recommendations.

2 thoughts on “Why are mainstream consensus estimates so wrong?”