The stock market, like any other market, is a set of relative opportunities, not absolute ones.

I have never seen a more pessimistic environment despite a stock market that continues to reach all-time highs. The S&P 500.

Many friends are writing about the evidence of the bubble and the risks of a stock market crash.

The arguments are obvious and correct. Among others, the largest bullish period in history,  high multiples and some macroeconomic data that begins to show signs of saturation.

However, and without denying anything of it, I wonder… what if the S&P 500 was cheap compared to other alternatives in equities?

First, the stock market, like any other investment, is a game of relative opportunities. Thus, when sovereign bonds continue to be very expensive, generating negative real returns and “high yield bonds” have a very dangerous risk-reward combination, it turns out that the stock market is not so expensive. Compared with those assets.

The amount of bonds with real negative yield has shot up to $ 9.5 trillion in May, an increase of 10% compared to April. This implies that the financial repression carried out by central banks leads to the fact that “lower risk” assets are too expensive and, by raising the implicit valuation of sovereign bonds, the implicit valuation of equities also rises. And what is the lowest risk alternative in equities? The S&P 500. It’s like raising the water level. Even submarines go up a bit.

Let’s see, if I buy a bond from a company on the verge of bankruptcy where solvency and liquidity ratios are getting worse, I will receive a paltry 4%. With the itraxx crossover at 284 basis points in Europe, the risk-return simply does not compensate. Compared to a dividend yield of the S & P 500 of 1.8%, it is clearly not worth the risk. Even worse, because companies whose solvency and liquidity ratios are improving have negative real yield bonds.

Meanwhile, what the S&P 500 does not deliver in dividend yield, it gives us in real (not fabricated) margins and growth as well as buybacks. 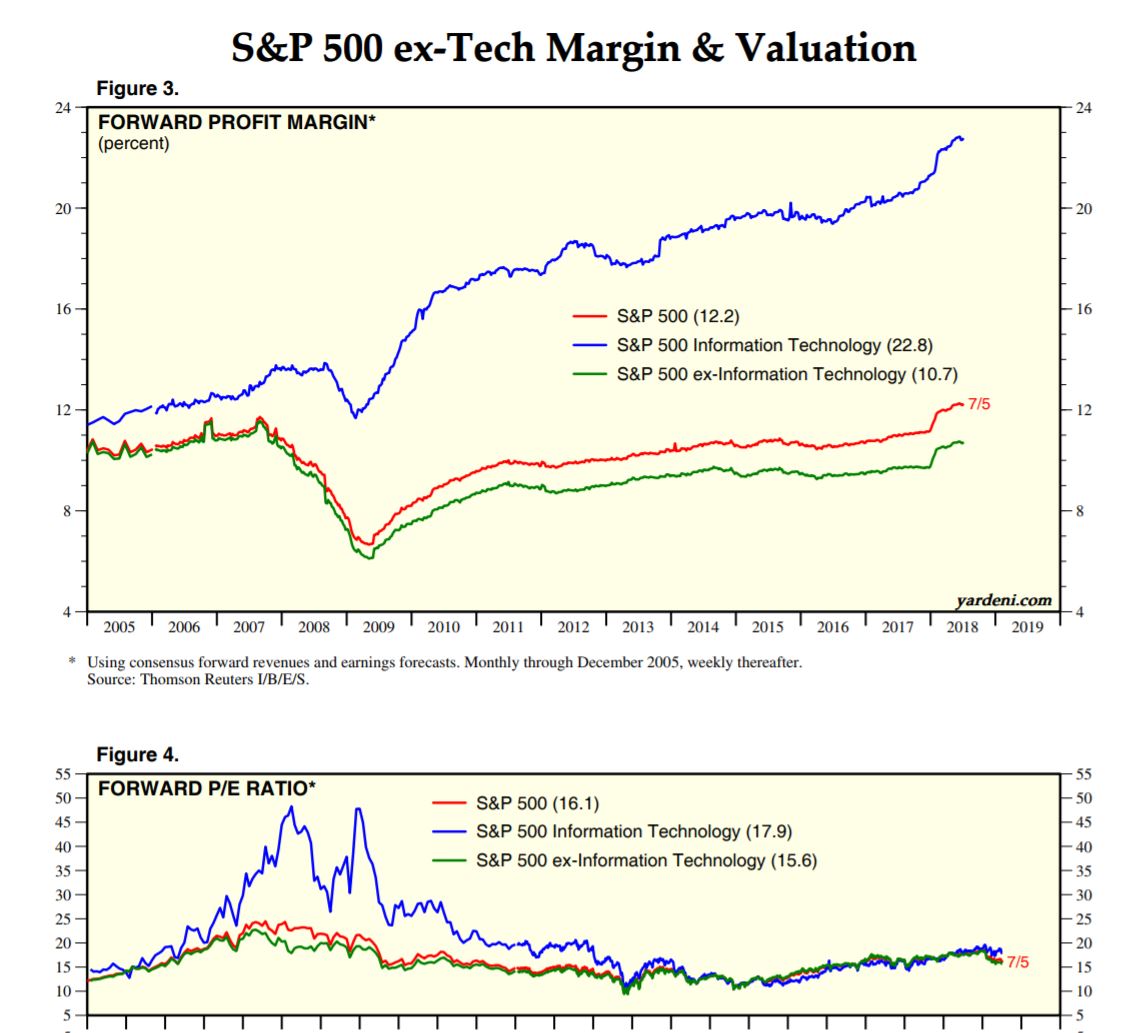 While growth in earnings estimates in Europe and emerging markets vanishes as consensus faces reality, the S&P 500 delivers better total shareholder return, lower risk, and better earnings growth profile. Not based on magic, based on reality.  Again, this is a game of relatives. 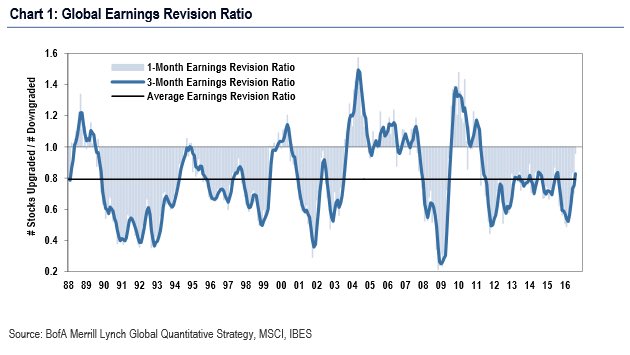 While earnings downgrades have been the norm for many years, we have seen that real growth showed that Europe or most Emerging Markets were just “cheap for a reason“. No growth and high political risk added with poor total shareholder return policies.

Second, compared to Europe or emerging markets there is no doubt. The S&P 500 companies are always more expensive … because they deserve it. They, on average, have much more attractive shareholder remuneration policies, a greater identity of objectives between the management team and the minority shareholder, better margins and, above all, they buy back stocks. Between 2008 and 2017 the largest buyer of shares in the US market has been … “Corporate America”. The companies themselves. Every year they tell us that buybacks are going to end, but my experience and the reality show that companies with a strong identity of objectives with shareholders rarely cut buybacks. In 2019, buybacks are estimated to remain above $1 trillion.

Many criticise buybacks. I disagree. I believe the best investment a company can make is its own shares when there are no alternative opportunities that offer the same combination of value and risk. In a world where overcapacity is evident, buybacks are not just the best alternative use of cash for many companies, but also the best antidote to malinvestment and empire/building. 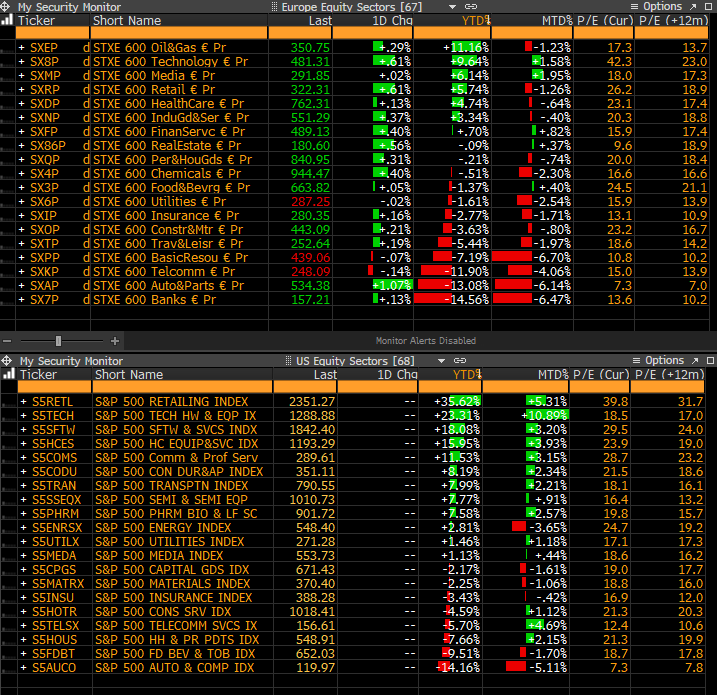 The never-ending message that Europe is cheaper than the US is dismantled analyzing by sectors and comparing the composition of the indexes. As the attached table shows, multiples by sector are very similar, even more attractive in the US. Especially when we analyze the margins, political risk, and total shareholder remuneration policies. 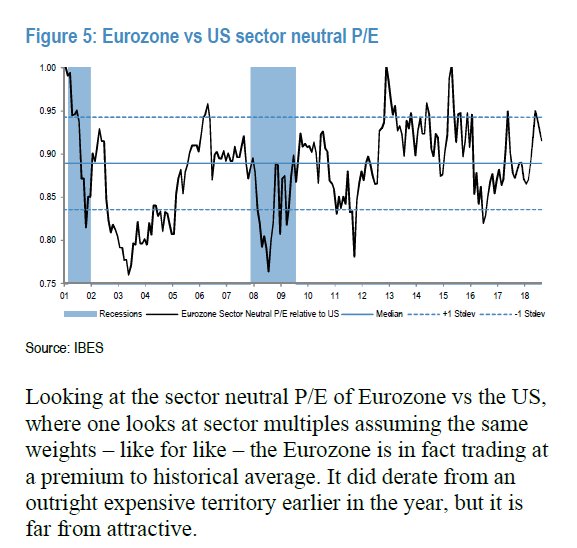 Third, the composition of the indexes. It is not the same to be “cheap” because, as in Europe, the index is full of banks, industrial conglomerates with no growth and subsidized sectors, than to be “expensive”, as is the US case, for having technology giants. Technology weighs almost 28% in the S&P 500, while not reaching 7% in the Stoxx 600.

Fourth, exposure to emerging markets with high risk and political volatility is very low in the US. Do not forget that, in addition, the exposure to emerging markets of European large conglomerates has been made through acquisitions at massive multiples, not via organic growth like most US multinationals. It is not the same to buy a company in, say, Brazil, at bubble multiples than to invest own capital in that country.

When you invest in the United States, you mostly buy the domestic economy with managers who -thankfully- mostly ignore government “recommendations”. Double security. I always remember the cases of Wynn or Exxon when they refused to do what President Obama “demanded.” Political risk is not only much larger in Europe, but in emerging markets.

It is not the same to buy equities when management is politically motivated than when it is profit motivated. In the first instance, multiples compress and, more importantly, stocks fall as much or more than the US ones when markets correct.

S&P 500 companies export relatively little. Less than 34% of profits come from abroad, and in those that sell a lot in foreign markets, there are almost no bubble-acquisition components. Less than 10% of the profits abroad of the S&P 500 companies have been “bought” inorganically through mergers and acquisitions at massive multiples. In the Stoxx 600,  almost 60%, led by banks, electric utilities and telecommunications.

Fifth, and crucial. There are no state-owned companies in the S&P500. When you buy emerging markets you are usually exposed to a huge number of government /controlled companies, whose concerns about shareholder returns are mostly non-existent, if not directly against minority shareholders via empire-building company decisions and politically decided value-destructing capex.

You may say that everything might be true, but that multiples already reflect that. I do not think so. If we analyze the S & P 500 by sectors and excluding FANG stocks, it turns out that companies are trading at multiples that are very similar to European and emerging market ones if you correctly assume real earnings growth and currency risk.

As an equity investor, I prefer to invest with a businessman who risks his or her fortune with me, than in a company that does not have entrepreneurs, but VIP employees, who do not own almost any shares of the company they manage. I prefer to own a stock in a company where the management is worried about delivering because they face the same losses I face than to invest in a  stock where management does what government wants them to do and faces no consequence when they miss targets hiding under the “long-term”  disguise.

Of course, you might rightly say that all stocks globally are expensive and bonds as well and that we should just buy gold. But hey, I am talking as an investor in bonds and equities. However, if markets fall due to economies stagnating and central banks will continue to implement financial repression, it means disinflationary pressures, so gold might be a tricky investment as an inflation hedge. In any case, I believe gold is a good investment idea for the long-term.

Back to the world of relatives. No, I do not see the US market as expensive compared to Europe, Japan or Emerging Markets. And, above all, almost always, if the US stock market falls, so do the European, Japanese and emerging ones.

“Cheap-for-a-reason” markets do not protect in a downturn.