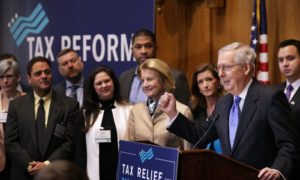 Mainstream commentary on the tax reform is mostly negative. But why is the response from the globalist crowd so aggressive?

Some economists are worried it could raise the deficit. However, the same people didn’t mind President Barack Obama’s government spending spree, which resulted in the highest deficits in the nation’s history.

New York Times columnist Paul Krugman wrote in an article that it was “time to borrow,” after a $10 trillion increase in debt during the Obama administration. And now these analysts are worried about the deficit?

No wonder that a group of millionaire and billionaire globalists have opposed the tax cuts. And it’s not out of generosity. If you are a multibillionaire and want to pay more taxes, it is very simple: You can donate to the Treasury and leave the rest of the population alone. The rest is posturing.

The actual reasons behind the opposition are that part of the critics’ business comes from government handouts or subsidies. Yours doesn’t.

They can live with high tax rates because they can hire top tax experts to optimize their bills. You cannot do that. More importantly, big government is essential for crony sectors to maintain their rent-seeking businesses. It’s not for you.

Nothing to Worry About

However, the tax reform does not have to increase deficits if, as we can see in the congressional budget, discretionary spending is cut in nonessential areas.

It also does not reduce revenues. Closing the current GDP growth gap, set at $1.6 trillion, it will likely help boost revenues. At the same time, repatriation of a part of the $2.5 trillion of U.S. capital parked abroad will significantly increase U.S. revenues and capital investment.

In fact, the tax reform can pay for itself just by recovering the pre-crisis pace of growth. The United States cannot just accept to grow at a weak 2 percent level. It can close the recovery gap and bring back investment that has gone offshore through inversion deals or expatriation of capital due to excessive bureaucracy and taxation.

Only subsidy-driven sectors and bureaucrats can say that the current corporate tax rate in the United States is fine with a straight face. It is one of the highest corporate tax rates in the world, surpassing some of the most interventionist countries of the European Union.

They argue that the effective tax rate is lower. So it is in the rest of the world. U.S. companies still pay between three and five points more in corporate taxes than the developed country average.

But therein lies their fallacy: Only the sectors close to the government benefit from lower effective tax rates.

The vast majority of businesses in the United States pay up to 10 percentage points more than their peers in the other developed countries, according to a report by tax consulting firm PriceWaterhouseCoopers.

Lowering the nominal tax rate means more investment, which has stalled in the past eight years, and more jobs. Yes, the tax reform also means more money to pay dividends, buy back shares, and lower debt.

The paternalistic argument that companies cannot have lower taxes because they might use their hard-earned profits the way they prefer is ridiculous.

Good public services are better financed in a prosperous and growing economy, not in a tax hell.

To think the companies’ money should be in the hands of government for more spending is advocating the same malinvestment and misallocation of capital that has led to the United States posting the lowest productivity growth in decades and the poor recovery.

The argument that these tax cuts benefit the rich is incorrect. The middle class will have the standard deduction go from $6,350 to over $12,000 for single filers, and $12,700 to $24,000 for married couples filing jointly, according to the State Financial Officers Foundation. This will benefit 90 percent of all filers, up from 60 percent today. Tax credits per child will increase from $1,000 to $1,600.

It’s the Spending, not the Cuts

The history of tax cuts in the United States has proven that tax revenues increase later due to higher economic activity. The Kennedy and Reagan cuts all boosted revenues.

The much-criticized Bush tax cuts did as well. Between 2004 and 2007, federal tax revenues increased by $785 billion, the largest four-year increase in U.S. history, according to the Treasury Department, with individual and corporate income tax receipts rising 40 percent in the three years following the Bush tax cuts.

What has caused deficits to soar in the United States and everywhere else is the increase in government spending. Governments cannot look at the economy and say, “These are my expenses. Give me the funds to cover them.”

It is the other way around. The public sector does not exist unless there is a thriving and profitable private sector. And government spending must be limited to the essentials of public service. The government provides a service to the taxpayers, who pay for it in advance.

That is why tax cuts are essential and need to be implemented despite the deficit argument. “Taxes cannot be cut because there is a deficit” is a false argument.

Because if we believed it, taxes would never be cut and would always go up. Governments will always use all their budgeting power and debt capacity to the maximum.

Taking 35 percent of the revenues of families and businesses has transformed the United States from being a society that incentivizes prosperity to one that perpetuates entitlement. And that is the recipe for stagnation.

Ironically, tax cuts are social justice. Economies are more efficient, prosperous, and social when families and businesses manage more of their own money. Government does not have more or better information of when and how to spend money. And no, welfare is not hurt by tax cuts. The best welfare policy is growth and job creation, not entitlements and subsidies.

Good public services are better financed in a prosperous and growing economy, not in a tax hell. The entire European Union is a debt machine where most public services are financed with debt, and we have seen the disastrous results of those policies in growth, jobs, and welfare, especially in the periphery and France.

The tax reform must happen, and it’s best to follow it with spending cuts and a balanced budget. But if we start with politicians deciding the budget, the perverse incentives of the system will never let taxes fall.

Governments need to know their limits and stop looking at companies and families as if they were ATMs.

Daniel Lacalle is chief economist at Tressis and author of “Escape From the Central Bank Trap,” published by BEP.