Political risk in Europe was largely ignored in international markets because of the mirage of the so-called “Macron effect”. The ECB’s massive quantitative easing program and a perception that everything was different this time in Europe added to the illusion of growth and stability.

However, a storm was brewing and the same old problems seen throughout the years in Europe were increasing.

In Italy, the shock came with an election that brought a coalition of extreme left and extreme right populists. Disillusion with the Euro was evident in Italy for years, as the economy continued to be in stagnation while debt soared. However, international bodies, mainstream analysts, and banks preferred to ignore the risk, instead continuing to announce impossible growth estimates for the following year and science-fiction banks’ profitability improvements.

Italy’s economic problems are self-inflicted, not due to the Euro. Governments of all ideologies have consistently promoted inefficient dinosaur “national champions” and state-owned semi-ministerial corporations at the expense of small and medium enterprises, competitiveness and growth, labor market rigidities created high unemployment, while banks were incentivized to lend to obsolete and indebted state-owned companies in their disastrous empire-building acquisitions, inefficient municipalities, as well as finance bloated local and national government spending. This led to the highest Non-Performing Loan figure in Europe.

Italy’s large debt and non-performing loans can create a much bigger problem than Greece for the EU. Because this time, the ECB has no tools to manage it. With liquidity at all-time highs and bond yields at all-time lows, there is nothing that can be done from a monetary policy perspective to contain a political crisis.

In Spain, something similar happened.

The Spanish recovery from the worst crisis in decades was impressive and an example for other European countries, but weak and fragile. Spain recovered more than half of the jobs lost during a crisis and slashed deficit by half. Exports rose to 33% of GDP.

However, large imbalances continued to build.

Spain, like Italy, France and Portugal, saw a rising populist wave and, in typical European Union fashion, decided to combat populism by increasing spending and adding public sector imbalances. By doing so, Spain, like Italy, did not stop the populist demands.

However, growth was impressive. In 2018, despite an evident slowdown of the Eurozone, Spain showed a 3% annualized growth in the first quarter. The reason for the difference in performance of Spain relative to other neighboring countries was a very ambitious set of structural reforms. But they came at a cost, as we have seen in many other countries where tough decisions had to be made, and the government lost an absolute majority in the past elections. Now, internal forces put the recovery in danger and threaten the economy again.

The excuse for a vote of no-confidence came from recent corruption cases that have affected the Popular Party, mainly the so-called Gurtel scandal of illegal financing, but any discernable investor knows this is pure political tactic, because the alternative parties are also involved in very relevant corruption cases. All these cases come from the past. From the housing bubble at the beginning of the 2000s (PSOE has the unemployment fraud in Andalucia and the Catalan separatists the embezzlement scandal called “the 3%” because of the bribes requested for public contracts).

The main risk in Spain is very similar to Italy. A weak minority government led by parties that demand massive government spending and more entitlements with larger deficits, could be in power at a crucial time for Spain. When the tailwind of massive liquidity injections and low rates from the ECB ends, Spain will have refinancing requirements that exceed €300 billion per annum before 2022. In 2018, 41.2 billion euro, in 2019, 82.4, in 2020 83.9 and in 2021 58.5 billion euro, with 60.4 billion maturing in 2022.

Spain needs to make an adjustment of 15 billion euro in 2018 to meet its commitments with Brussels, and the risk to the economy is that the budget bets the entire deficit reduction on higher tax revenues from stronger growth. That is why markets are so concerned. Spain is a very cyclical economy and the wrong policies can send the country to recession very quickly, as we saw in 2008-2010. However, in 2010 debt was much lower and rates were higher, so there was some fiscal space once the ECB started to lower interest rates… Unfortunately, like Italy, France and Portugal, Spain abandoned its reform agenda to bet it all on monetary policy when the conservative government lost absolute majority. 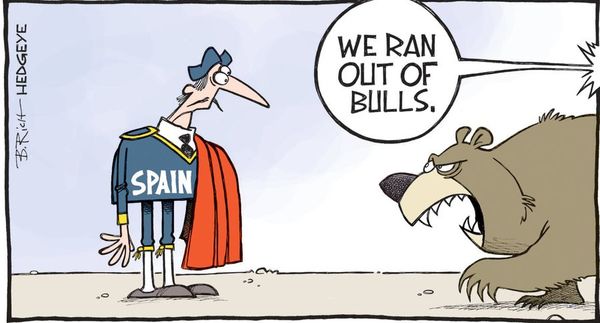 Now that the tide is turning and the placebo effect of the ECB’s quantitative easing is disappearing, we are seeing a very evident slowdown in the European economy, and Spain’s main trading partners are Eurozone countries, which could damage exports. But we are also witnessing the sudden stop in emerging markets like Brazil or Argentina, and the external sector also depends strongly on exports to these countries.

The likely coalition of Socialists, communists and separatists is aiming to unwind the labor market reform, which is likely to hurt job creation in a country with 15% unemployment where rigid labor laws have made it have an average of 17% unemployment since 1980. Additionally, as we have seen in so many European countries, they want to increase spending massively for entitlements and “relax” deficit targets, i.e. borrow more. The economic programs announced promise up to €60 billion more spending with €47 billion more revenues from raising taxes. The latter will not be achieved, and the former will be overspent, as always.

Like in Italy, the risk is that none of these parties talk of breaking the euro or defaulting now, but most of them have signed in Brussels requests for mechanisms for “orderly exit”. Obviously, with monster debt and massive imbalances, orderly exit is an oxymoron.

The risk of default is currently kept low by the massive quantitative easing of the ECB, but at some point Germany and other countries are going to say “enough is enough”.

Obviously, populists in Spain, like Italy, blame it all on “austerity”. With government spending 13% higher than in 2007, and public spending to GDP at almost 40%, calling the current situation austerity would be a joke if it was not so serious.

Why is there a risk on corporates and the overall economy? In Spain and Italy the real economy is extremely dependent on banks. While in the US banks finance less than 20% of the real economy, in the European Union it is more than 80%. Banks, at the same time, are extremely dependent on sovereign risk. Not just due to their holdings of sovereign bonds, but because of massive lending to local, regional and state administrations. This makes SMEs and families very exposed to sovereign risk.

The Financial systems of Italy, Spain, Portugal and Germany are the largest holders of their countries’ sovereign bonds, at 18%, 13%, 11% and 10% of total assets respectively. Many investors believe that the European Central Bank is going to solve this whole problem monetizing excess deficits and spending. The main problem is that this is the recipe for a Japan-style stagnation process. The central bank cannot print growth.

Analysts ignore the demographics risk in Europe, the excessive spending in entitlements and the constant crowding out of the public sector against the private sector.

The problem in Spain and Italy is not the Euro or the financial markets. It is the continuous, relentless policies of subsidizing the unproductive and the public sector at the expense of the high productivity sectors and taxpayers.

A coalition of socialists, populists and separatists in Spain would not only demolish the reforms that have helped the recovery, it would immediately destroy credit confidence by demanding more wasteful spend and more entitlements while promising a deficit improvement that never arrives through giant tax increases.  These parties want to “recover” the policies that existed before the crisis. The ones that destroyed 3.5 million jobs with the largest stimulus package ever applied in Spain (almost 30% of GDP deficit spending).

The risks in Europe are being underestimated, and the only thing I hear all the time as a bullish argument is “the ECB will monetize it”. Careful what you wish for. The best outcome is a Japan-style stagnation. The worst, back to 2011.

This is a Hedgeye Guest Contributor note written by economist Daniel Lacalle. He previously worked at PIMCO and was a portfolio manager at Ecofin Global Oil & Gas Fund and Citadel. Lacalle is CIO of Tressis Gestion and author of Life In The Financial Markets, The Energy World Is Flat and the most recent Escape from the Central Bank Trap.