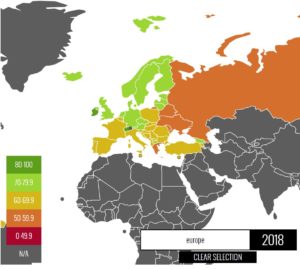 One of the most common fallacies of the new populists is to say that their model is the “Nordic” one and that those countries are successful examples of how “socialism works”. When I mentioned it to the Finnish Finance Minister Petteri Orpo at a recent ECR dinner, he could not believe it.

Expropriations, massive tax increases, appropriation of savings and subordinating the growth model to political control is what populists defend. The same as Venezuela, which all of them praised -from Bernie Sanders to Owen Jones or Corbyn and Chomsky– until it collapsed. Then they moved on to the fallacy of “the Nordic model”.

Do you know what interventionists forget about the Nordic nations?

They are leaders in the economic freedom index (Heritage) and ease of doing business according to the World Bank.

Private property is guaranteed by law and citizens’ savings are fully private and free of government control. All Nordic countries have been lowering the tax wedge and -until the recent tax cuts- had lower corporate tax rates than the US.

The state does not dictate or impose schooling and healthcare (most have co-payment schemes). It simply administers and promotes choice between private and state-run services.

They are leaders in private banking, which finances the vast majority of economic activity (80%).

They are leaders in attracting capital, guaranteeing legal security and private investment.

The public sector does not dictate the growth pattern or the way in which the economy should be run, it is generated from the private sector, which finances more than 60% of research and development, and government applies private-sector best practices of efficiency and transparency in the management of public services. In addition, public officials do not have a life-long position. The opposite of the political control these populists defend.

Nordic countries have carried out successful privatizations of state sectors, from telecommunications to electricity generation and distribution. Sweden privatized even the postal service. Even some forests were privatized.

They have a labor market that is among the most flexible in the world.

In these countries, private education is encouraged through school vouchers, not forced state-run schools.

There is also the fact that it is virtually impossible to copy in the US a model used in countries with fewer inhabitants than New York, but the most important difference is that choice, freedom and private initiative are the cornerstone of Nordic nations, pillars of a society that none of the populists want to implement.

No, socialism is not the model of the Nordic countries. And the interventionists that use these countries as their “model” have a completely different system in mind. State control.

Nordic countries systems are not based on state control of the economy but based on a civil society enforced system of freedom, individual initiative and responsibility.

I recommend you read “Scandinavian Unexceptionalism” by Nima Sanandaji or “The Secret of their Success” in The Economist.

The success of the Nordic countries has been to take pro-market measures, privatize inefficient sectors and guarantee private property, wealth creation as well as legal and investment security.

The Nordic countries know that there is no welfare state without a thriving private sector, economic freedom, and private investment and that the public sector is there to facilitate, not absorb the country’s economic activity. They know that there are no tax revenues without a flourishing private sector. And they know, because they made the mistake in the past, that multiplying state intervention only leads to failure. That’s why they rejected socialism.

There is nothing Socialist about the Nordic Nations. Being leaders in Economic Freedom, free enterprise, defense of private property, leaders in private banking and entrepreneurship promotion is the opposite of socialism. Interventionists willingly want us to confuse a welfare system in a capitalist society with socialism.

Socialism is the political and economic theory which defends that the means of production, distribution, and financing should be owned or controlled by the state. Nordic countries are NOT socialist. They are capitalist societies with a welfare state, like most capitalist nations have, by the way. The US as well. And they are the first ones that understood what we all know: socialism never works.

3 thoughts on “Face It, Nordic Countries Are Not Socialist”