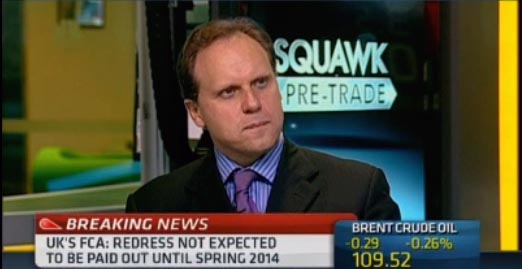 And my article about over-regulation:Euro Banks and the Dangers of Over-RegulationIn a chapter of my book “Nosotros los Mercados” (We, the Markets) I mention that in the middle of the financial crisis, a French banker told me that “we don’t analyse a loan for the government, we just grant it”. Here is the link: http://video.cnbc.com/gallery/?play=1&video=3000192594Thus, it is not surprising that most European politicians just do not understand that banks cannot reduce debt and expand credit everywhere at the same time.Yet that is exactly what governments demand of the banking sector. More credit, but mass deleveraging.This week, Europe adopted yet another resolution. A few hundred more pages of rules.The process of constant regulatory changes does not strengthen the financial sector balance sheets, it weakens them. Because constant revisions sabotage the divestment and recapitalization process and introduces uncertainty, which scares demand and valuations of the loan portfolios continue to erode, deepening the recession.

This is a crisis of an economic model too dependent on commercial banks -320% of Eurozone GDP- and a very intervened system . Excessive, complex and bureaucratic regulation has prolonged the agony of the industry for many years, instead of facilitating market conditions for the capital increases and asset sales needed.

Despite the detailed and complex regulation of the Eurozone, between 2008 and 2011 Europe spent 4.5 trillion (37% of the GDP of the EU) in aid to financial institutions, many of them public and highly supervised.

More regulation will not solve the problem.

Europe’s banks suffer what is called an “endogeneity problem ” (read the excellent analysis Regulation of European Banks and Business Models of the Centre for European Policy Studies). It is precisely this excessive intervention which prevents a quick and surgical solution to the financial sector difficulties. Regulation must be effective and simple. In Europe it is not.

The resolution of the Eurogroup this week is another example of such endogenous problem. It has been hailed as a success of the bail-in model, but is far from it. First, because it does not close the door to unilateral state intervention and also it does not facilitate the creation of prompt capitalization mechanisms in banks.

It is an agreement that weakens, but does not eliminate the need for bailouts with taxpayer money.

It has been more than six years since European banks should have reduced debt aggressively. According to BNP, deleveraging has only been 30%.

Luis de Guindos, Spain’s Economy and Competitiveness Minister, was right trying to protect deposits of more than 100,000 euros and avoiding Cyprus-style statements. Because he knows that banks need privatr capital and confidence to deleverage. Doing what Europe has done, putting the stick before the carrot leads to new shocks .

In fact, emphasizing the risks to shareholders, bondholders and depositors, but without having promoted before recapitalization and liquidity mechanisms, is likely to generate even more public bailouts, because there might not be enough private money when needed, creating the perverse effect of accelerating what the agreement seeks to avoid.

There is not enough money between shareholders, bondholders and more than 100,000 euro deposits to cover the losses if a large bank experiences difficulties. Not even close, when banks in Europe are geared between 25 and 40 times.

The European banking system holds total assets of 26 trillion euros, of which France is the largest (€ 8.5 trillion) and Germany the second (€ 8 trillion), followed by Italy and Spain, with 4.1 and approximately 3.5 trillion.

France is the country where the financial sector holds more weight, both compared to the deposits that support it, and in relation to the country’s GDP. And France wants to maintain its tight state control of its bloated financial sector avoiding mergers and foreign investment, while defending a banking union that pays for the bill in case of trouble. It is not the only European country that wants to have its financial sector “bound and controlled” but also with access to the purse of others. This is what makes direct recapitalization such a moral hazard.

European banks have been an essential weapon for governments to artificially expand weak economies, but now they put the finance sector at risk without thinking of the consequences. Well, even worse, thinking that nothing bad is going to happen and that Brussels “builds confidence”.

The summit this week, where leaders discussed the thorny issue of bank recapitalizations, has been an example of absolute ignorance of the mechanisms of risk facing the financial system after nearly six years of missteps.

I’ve said it many times, the European financial sector is dangerously dependent on the strength of government debt. Few banks of the European Union would survive a haircut on sovereign debt and the impact on businesses and citizens would be enormous. However, public debt does nothing but grow in almost all member countries because growth, consumption and investment is torpedoed with financial repression.

Allowing growth and open doors to investment and capital is the solution of all these communicating vessels that converge in the financial sector. Attracting capital, creating a favourable investment environment, with increased disposable income and economic growth, will recapitalize the banks, their assets would regain value, companies and families would be able to repay their debts and the whole system would heal rapidly.

However, with financial repression, predatory regulation and intervention, politicians can agree on whatever they want in another committee, because the hole of the economy and state debt grows, and with them the difficulties for banks, in a downward spiral.

Europe needs to attract foreign investment. Now. Banks have an undeniable responsibility in the crisis, but we cannot deny governments support of the excessive and artificial credit expansion of 2001-2011. They are two sides of the same coin. The solution to a decade of excess is not going to come in two years, but we cannot perpetuate the problem.

1 thought on “Banks have become over-regulated. My interview on CNBC this morning:”