“The Fed’s policy Can Have unintended consequences” – Richard W. Fisher

Do you remember, at the peak of the European crisis, when we heard again and again that peripheral stocks were very cheap because of their exposure to Latin America? Do you know why you do not hear it now?

Because the main emerging markets are showing signs of weakness. The latest, Mexico, which showed a decrease in GDP of 0.7% in the second quarter compared to expectations of 0.3% growth. A country whose growth depends heavily on exports, showed an unexpected fall. 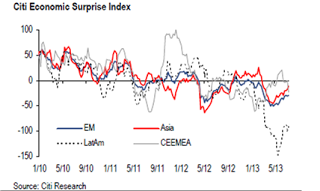 But Mexico is not a huge problem. It will continue to grow at 1.8%-2.2% in 2013. The risk in emerging markets is not only lower than expected growth in Brazil , Mexico, India , or China. The big dilemma is what markets call “a sudden stop”. An abrupt disruption in the flow of capital investment.One of the consequences of monetary stimulus in recent years has been extreme inflation in risky assets. I have said it many times in this column. The U.S. exports inflation to semi-dollarized economies and emerging markets, and some of the favourite investments throughout QE times have been emerging market bonds. So much so that, as we mentioned in “The Big Bubble“, we have seen very low quality bond issuers access the market at extremely low rates.

Now, with the prospect of the Federal Reserve reducing its stimulus, we have seen a wave of unprecedented withdrawal of capital. 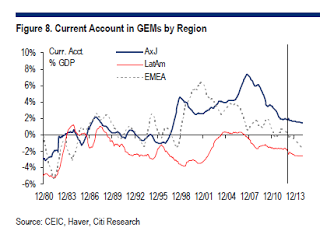 The risk is not easy to quantify, but according to our internal analysis it can reach 0.5% of global GDP in 2013. Remember the impact of the credit crunch in the OECD in 2008.

The impact on economic growth and stability in emerging countries can be very relevant . The combination of high inflation, current account deficits and loss of dollar reserves by central banks has never been a winning equation. And the three variables deteriorate very quickly.

Indonesia has lost 13% of its foreign reserves in three months, Turkey ,Ukraine, India have shown similar figures. Argentina by 12% in four months. This is important because for many countries it is very important to hold enough dollar reserves ahead of uncertain times and financial difficulties.

Many of these countries and their companies have debt in dollars and now hold less U.S. currency to meet their commitments.

The economic instability of many of these countries was not a topic of discussion at the Fed until the world became concerned about the brutal collapse of the Indian rupee against the dollar 55 to 65. Several friends in Washington began to ask, diplomatically, about the risks. And of course, they seem to be small, but with soaring inflation and a current account deficit of 4.8% of GDP, India has not seen its exports improve even with the collapse of its currency.

A “sudden stop” has global effects. It has a significant impact on European banks, heavily exposed to Latin America, and multinational companies of the old continent, as it begins to glimpse its way out of the recession. And very important direct consequences in British and American banks, because of their exposure to Asia and Africa. But above all, it creates challenges for developing countries, with increasing refinancing needs, if they cannot access the capital markets after the boom years of the Fed “money helicopter”.

For the European Union these are not such bad news. Emerging countries are not exporting much more, among other things because the OECD is trimming its internal demand,  and capital outflows from developing countries go to ‘low-risk countries’ in Europe. Financial asset rotation out of risky assets into defensive countries has always benefited the European Union and the United States.

How to “avoid a sudden stop”? Now it’s not easy, but the best way to avoid a huge meltdown in developing countries is to do just what the Fed is doing. Dip its toe in the water but not much, say “yes, we will taper QE” and then say “no, not now”.

We will be watching. It can be a small one-off shock or a snowball, but a “sudden stop” is not irrelevant.

(This article was published in El Confidencial)

2 thoughts on ““Sudden stop”. The risk in emerging markets”