The recent collapse of the Argentine Peso and other emerging currencies is more than a warning sign.

It could be the arrival of a “sudden stop”. As I explain in Escape from the Central Bank Trap (BEP, 2017), a sudden stop happens when the extraordinary and excessive flow of cheap US dollars into emerging markets suddenly reverses and funds return to the U.S. looking for safer assets. The central bank “carry trade” of low interest rates and abundant liquidity was used to buy “growth” and “inflation-linked” assets in emerging markets. As the evidence of a global slowdown adds to the rising rates in the U.S. and the Fed’s QT (quantitative tightening), emerging markets lose the tsunami of inflows and face massive outflows, because the bubble period was not used to strengthen those countries’ economies, but to perpetuate their imbalances.

The Argentine Peso, at the close of this article, lost 17% annualized is one of the most devalued currencies in 2018. More than the Lira of Turkey or the Ruble of Russia.

What explains this drop?

For some time now, many of us have warned of the mistake of massively increasing money supply and using high liquidity to avoid much-needed structural reforms. In Argentina, the government of Cristina Fernández de Kirchner left a monetary hole close to 20% of GDP and massive inflation after years of trying to cover structural imbalances with increases in the money supply greater than 30-35% per year.

Unfortunately, as in other emerging markets, the urgent reforms were abandoned, and an alternative formula was tried. Issue great quantities of debt and continue financing a growing public spending with central bank money printing expecting economic growth and cheap debt would offset the growing fiscal and monetary hole.

This wrongly-called “soft adjustment” was justified because of the enormous liquidity in international markets and appetite for emerging markets’ debt driven by consensus estimates of a continued weakening of the US dollar. Many Latin American and emerging market economies fell into the trap. Now, when it stops, and the US dollar recovers some of its weakness, it is devastating. 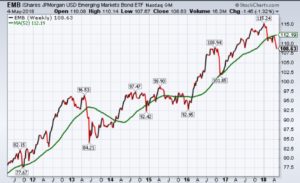 Argentina even issued a one-hundred-year bond at a spectacularly low rate (8.25%) with a very high demand, more than 3.5 times bid-to-cover. That $ 2.5 billion issuance seemed crazy. A one-hundred-year bond from a nation that has defaulted at least six times in the previous hundred years! Worse of all, those funds were used to finance current expenditure in local currency.

The extraordinary demand for bonds and other assets in Argentina or Turkey was justified by expectations of reforms and a change that, as time passed, simply did not happen. Countries failed to control inflation, deliver lower than expected growth and imbalances soared just as the U.S. started to see some inflation, rates started to rise. Suddenly, the yield spread between the U.S. 10-year bond and emerging markets debt was unattractive, and liquidity dried up faster than the speed of light even with a modest decrease of the Federal Reserve balance sheet. Liquidity disappears because of extremely leveraged bets on one single trade – a weaker dollar, higher global growth- unwind.

However, another problem exacerbates the reaction. An aggressive increase in the monetary base by the Argentine central bank made inflation rise above 23%.

With an increase in the monetary base of 28% per year, and seeking to finance excess spending by printing money and raising debt to “buy time”, the seeds of the disaster were planted. Excess liquidity and the US dollar weakness stopped. Local currencies and external funding face risk of collapse.

The Sudden Stop. When most of the emerging economies entered into twin deficits -trade and fiscal deficits- and consensus praised “synchronized growth”, they were sealing their destiny: When the US dollar regains some strength, US rates rise due to an increase in inflation, the flow of cheap money to emerging markets is reversed. Synchronized indebted growth created the risk of synchronized collapse.

The worrying thing about Argentina and many other economies is that they should have learned from this after decades of similar episodes. But investment bankers and policymakers always say “this time is different”. It was not.

Now Argentina has pushed interest rates to 40% to stop the bleeding. With rampant inflation and economic growth concerns, the Peso bounce is likely to be short-lived.

Massive money supply growth does not buy time or disguise structural problems. It simply destroys the purchasing power of the currency and reduces the country’s ability to attract investment and grow.

This is a warning, and administrations should take this episode as a serious signal before the scare turns into a widespread emerging market crisis.

Structural imbalances are not mitigated by carrying out the same monetary policies that led countries to crisis and discredit.

Over the next three years, the International Monetary Fund estimates that flows to emerging economies will fall by up to $60 billion per annum, equivalent to 25% of the flows received between 2010 and 2017.

This warning has started with the weakest currencies, those were monetary imbalances were largest. But others should not feel relieved. This warning should not be used to delay the inevitable reforms, but to accelerate them. Unfortunately, it looks like policymakers will prefer to blame any external factor except their disastrous monetary and fiscal policies.