(This article was published in El Confidencial on July 8th)
‘Everything is subject to conditionality. There is nothing without conditionality. Conditionality is what gives credibility to these measures’, Mario Draghi, president of the European Central Bank.
The new mantra in Spanish media is that the European Central Bank is attacking us. Before, it was the Anglo-Saxon press, then the markets, then,Germany… Now, according to some commentators, it is unquestionably Mario Draghi, president of the ECB, who is to blame for Spain’s misfortunes.
Draghi, obviously, is to blame for the reckless spending, for doubling the national debt, for the most convoluted regulation of the Organisation for Economic Co-operation and Development (OECD), the ghost airports and the phantom cities. Evil.
We have spent a week hearing: “Draghi will connect the printing machine,” and it seemed everyone was shocked when it didn’t happen. The debt threshold is at its limit even at the ECB. Quoting the famous South Park…”Aaaand it’s gone.”
Debt is a drug. And like drug addicts in the infamous crack supermarkets of Harlem, we were looking forward to the ECB to saving us from our debt problem with more debt in order to keep spending. And like drug addicts, even if the ECB lowers rates to indecently low levels, the effects last less and less.
We blame the ECB, which after lending €288bn to Spanish banks and lowering interest rates to 0.75 percent does not “do more.” What more do we want it to do? A donation. Ah, no, my friends, there are no donations.
The ECB does not help. It lends. The ECB doesn’t rescue. It lends. The ECB does not donate. It lends.
When people hear that the ECB should buy Spanish debt they should also know that it’s not a favour, and that there are strict conditions attached to the agreement. But more importantly, people should know by now that the ECB buying bonds does not solve anything, as evidenced by previous purchases, which have not lowered bond yields for more than a very short period of time.
These bond purchases of the past have done nothing but infect the ECB’s balance sheet the same way as the sub-prime debt packages of 2007, without attacking the underlying problem, which is excessive spending. 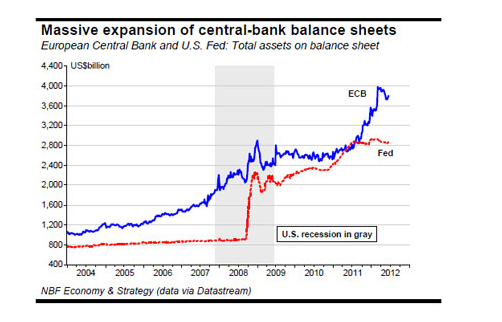 The ECB balance sheet has ballooned to 30 percent of gross domestic product of the Eurozone. The Federal Reserve‘s and the Bank of England’s balance sheet is 20 percent of the GDP of their countries. The Fed and BoE loans are paid back. In Europe, however, no one pays back these loans.
What is a little more debt between rich friends?
The ECB, which has nearly 40 percent of its assets in toxic bank debt, and has lowered interest rates again, has to do “more”. But who contributes to the ECB when all others ask for help? No wonder that Finlandand the Netherlands say: “Me? No, my friends.”
Spain demands “more” from the ECB even when Spain has received the equivalent of two Marshall Plans in aid since 2009. After two injections of liquidity (LTROs) that have crippled the ECB to €3bn of debt, we demand “more”. Expand the balance sheet, they say, which is nothing else than packaging and hiding debt. We demand donations. Well, no.
We live in a manipulated market and the more it is manipulated, the less the placebo effects last, because the real problems are not solved. A manipulated market to benefit the states. Financial repression.
It is curious to hear more and more people demanding financial repression, because that is what they ask for when citizens demand more inflation and mutualisation of debt. And it’s funny because media and citizens demand these measures as if everything was not going to be paid by the taxpayer in the end.
Financial repression
We claim our undeniable right to be robbed of our savings by lowering interest rates and to sink our financial capacity through inflation.
Commentators tell us insistently that there is no inflation threat. We hear over and over that this is a deflationary spiral, and meanwhile American economist Paul Krugman tells us that “a little bit of financial repression is not that bad.” However, inflation is there and it is a tax, an unfair and accumulated tax created to pay the excessive government debt.
However, the media repeats that there is no risk of inflation. Of course, anyone who pays for groceries, gas, utilities and bills sees prices going up every year while their net income after taxes plummets. Inflation according to “official figures” is 2 percent, yet the real increase in the cost of living is 5 percent per year. I recommend you read this report on the actual inflation in the United States compared to the official. 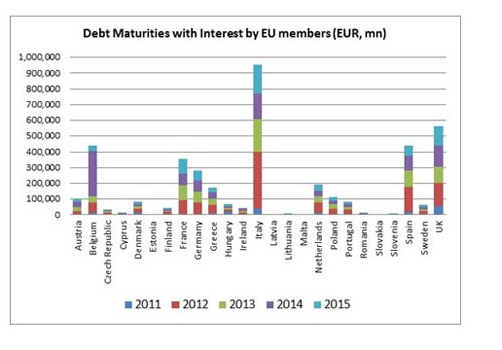 Every day, I read more suggestions from politicians, economists and other commentators calling for an “audit” of public debts and to consider “illegal” those debts incurred by a state and regional governments that have been democratically elected and supported by the majority.

When one reads “audit,” “revise debts,” or “lenders must bear some of the cost,” one needs to be aware of what it means. It means default. Because then none of us can complain that bond yields are too high. If we call for a restructuring, then bond yields are actually very low, as leaders are telling the market that here is a very high risk that one of them is elected and then defaults.
The consequences of a default are devastating:
. The country loses international support. The cost of the remaining debt after default would soar, as has happened in Greece and other similar countries.
. It does not reduce the need to make huge cuts. Spain has a primary deficit of almost 7 percent. Cuts would be even more severe after default, given that the funding of the structural primary deficit would be prohibitive.
. The credit crunch would be enormous. Forget lending to the real economy. The crunch would destroy growth and employment, but as the government would continue spending beyond its means, the crowding-out effect of the state would increase.
. Private companies would suffer immensely. Refinancing needs of non-financial Spanish firms are concentrated in 2014, and many would find it impossible to get financing on the market, which would lead them to cost-cutting and massive restructurings. 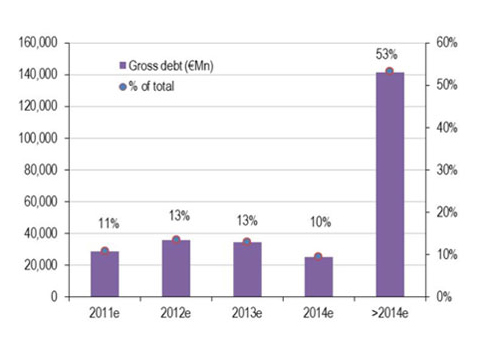 One of the most important sentences Draghi said on Thursday was: “What if all countries need help?” The ECB cannot bail out the big Eurozone countries. With what funds? We are talking of infecting the ECB’s balance sheet at €500bn annually if it needs to help Spain, Italy and those who have sought bailouts, when the latest could be Slovenia.

The ECB cannot buy debt without first seeing that countries have carried out drastic reforms that will prevent this debt crisis from happening again in 2014, because Europe faces €800bn of sovereign debt maturities every year over the next three years.

Spain has to solve its structural problems of competitiveness and high spending. To do that there is plenty of support and funding, but there are no donations or quick exits to a structural problem.
Converting the ECB into the cockroach motel, where what comes in doesn’t come out, would cost much more to all – businesses, citizens and states – instead of doing what should have been done years ago. Align expenses to revenues. What everyone is doing except the state.

Watch the documentary Fraud, Why The Big Recession here:

3 thoughts on “Blaming the ECB. Better to sink the fleet than to repair the boat”