(This article was published in El Confidencial on July 17th 2012)

The market had high expectations ahead of the announcement from Spain of new economic measures, but the comments in London are almost unanimous. The measures to reduce the deficit and the ones leaked for the electricity sector follow the same principle: take funds from the efficient to maintain the subsidized. It’s easy, as value-added tax revenues have disappointed due to alleged “cheating,” all citizens who do not cheat must compensate for the lost revenues.

Raising VAT is a measure that does not work as seen with previous VAT increases, which generated less revenue. However, it would have been acceptable if it had been accompanied by immediate cuts on the political spending that is choking the Spanish economy.

Instead, nothing substantial has been done about the large subsidies and grants, duplicate government agencies and the unsustainable weight of a bloated state created on the back of the housing bubble.

“Government’s view of the economy could be summed up in a few short phrases: If it moves, tax it. If it keeps moving, regulate it. And if it stops moving, subsidize it.” Ronald Reagan

A government apparatus that is still above the peak levels of the bubble in 2007 has been cosmetically cut ever so slightly and those cuts are deferred throughout three years. As an example, of the 600 loss-making public enterprises that had to be closed, only two have been closed. No hurry. Meanwhile Spain became the fourth country in Europe with higher taxes .

I hear that the reason for these soft measures on spending is because the government “relies on exports” and expect that gross domestic product will not fall “as much as currently estimated”, and as such it will not be necessary to reduce the weight of the state, which is currently “only” 50 percent of the economy.In my opinion, Spain runs the risk of following in the footsteps of Portugal. “We’ve done our homework,” said Vitor Gaspar, Portugal’s finance minister. Yes, all but cutting the weight of political spending. In Portugal, the weight of the state in the economy rocketed and bond yields rose again after the cuts to historic highs. 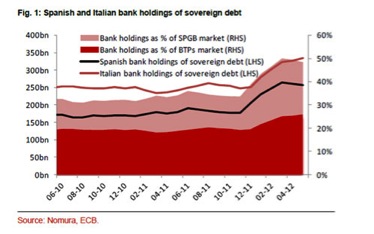 The impact on the economy of constantly rescuing and subsidizing entities is brutal because it discourages the efficient, weakens the non-problematic companies and kills the perception of economic freedom, but above all, because it makes “socializing losses” a habit when it should be a truly exceptional measure and limited to extreme cases.

This is important because when we see that the €100bn “loan” to bail out banks includes the following demands:

– A clause that requires banks to have a capitalization (core capital) of 9 percent. This means a larger “credit crunch” than currently seen unless we liberate financial resources currently absorbed by the government, forcing banks to buy sovereign and subsidizing zombie companies.

– Requirement to divest industrial holdings. If tax increases, lack of security and regulatory uncertainty weaken companies, stocks collapse and capital losses of these holdings will be extreme.

– Requires the creation of “agencies to sell troubled assets” – bad banks – in which the taxpayer runs the risk that the price paid by the state for these assets is “far from a bargain.”

When public resources are allocated to bailouts and subsidies constantly and in numerous sectors the crowding-out effect not only hurts the real economy but it also forces taxpayers and investors out. Who will create wealth and tax revenues if we end up with a country of rescued banks and subsidized firms?

The electricity sector regulation that has been leaked seems equally wrong-footed, aiming to seize revenues from any company that generates positive cash flow. After a decade of planning as if demand were to grow by 2 percent per annum, giving subsidies everywhere. Now that the tariff deficit and the cost of the system have ballooned, the solution is to tax everyone with the risk of bankrupting the whole energy sector, which would be loss-making in generation and distribution in Spain.For reference, I wrote an article a few months ago about the numerous mistakes made by Spain in its energy policy called “The problem of fixing the price of electricity in government offices and not in the market.”

In a nutshell, we have a problem when most technologies are subsidized and over-capacity is not sorted through market dynamics. Subsidized coal, capacity payments, “restriction” markets, unsustainable premiums to renewables, etc. Overcapacity in the entire system… But who cares when the taxpayer pays for generous subsidies and planning mistakes?

We risk losing investors in Spanish debt and the Ibex 35
If we rescue the inefficient and those who eternally generate losses, we will continue pushing out investments and capital, hurting small and medium enterprises, which generate 70 percent of value added in our country, making it impossible for businesses to grow due to restrictive legislation, high energy costs and an onerous tax burden.The policy of “pretend and extend” of the government aims to help different lobbies, but the problem is that cronyism just makes zombie companies, not strong ones. As the government slowly runs out of other people’s money, even lobbies end up suffering the tax collection greed. Everybody loses. 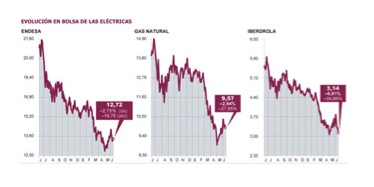 The state cannot limit and supplant the private sector. Just looking at the average returns made by government investments in the past eight years is painful. Negative, on average, compared with the cost of capital.

The bank bailouts and unproductive subsidies are two very similar problems arising from the habit of governments of intervening in business decisions and then “try to solve” their mistakes through confiscatory measures. And it’s very easy to do when there is too much money available, but when the government runs out of other people’s money, funding inefficiency and subsidies means more debt.

We must stop intervening wildly. The solution for Spain cannot be trying and failing to recover the tax revenues from the real estate bubble, as I mentioned in this Wall Street Journal article.

I read that the Spanish government is very worried about the possibility that the companies in the Ibex 35 could be taken over. However, through a myriad of taxes, regulatory changes and legal uncertainty, Spain seems to be making its companies unattractive and weaker, massively indebted, uneconomic and subject to the whims of the state both from the investment side (“you have to build at any cost”) and from the side of profits, which are seized from time to time.

It is sad to say, but more and more funds are not allowed to invest in Spain. I hear it constantly. “Spain is uninvestable.” If I were a member of the government, I would worry less about trying to “protect” through intervention and I would worry more about attracting capital.