(This article was published in El Confidencial on July 23rd 2012)”Defeat? I do not know the word”. Margaret Thatcher.Here come the shorts. It was obvious. Everyone prepared for a dose of QE from the Fed and the ECB, and when it didn’t happen, on Friday 75% of orders were better to sell.

Spain moves closer to a full bailout. Congratulations, we did it. Years of nonsense saying “we don’t have a problem of public debt” and “we have less debt to GDP than Japan” while our ability to repay was destroyed with wasted money on phantom airports, irrelevant statues, and high-speed trains with no passengers. The Ibex 35 plummets; no one invests in our bonds and the spread to the Bund rockets to 610 basis points. But do not think everything is discounted and that a bailout will be positive.

“There is no money”

The Spanish government in 2011 had fiscal revenues of 377 billion euro, about 7 billion more than in 2009. That means that in the middle of the crisis, with tens of thousands of businesses closing and unemployment rampant, revenues not only remained at a monstrous 37% of GDP, but increased. I estimate revenue of 385 billion in 2012. In other words, there is plenty of money. And there is liquidity, with hundreds of billions provided by the ECB. The only thing where there is no more money for is the public spending bubble, which has soared to 470 billion.

The recent demonstrations, which are perfectly legitimate, must take into account this problem. Today’s cuts come from past excesses.

It is amazing to see that citizens throughout the entire EU seem to presume “good intentions” to those rulers that bankrupted countries through reckless spending, but accuse of “bad faith” to those that deal with paying the bills and cleaning the accounts. The widespread perception that money is free, that spending is good and saving is bad.

Slash political spending now
Maybe it’s a matter of perspective. Arthur Laffer said that he would reduce the deficit in one hour. I am more conservative. Give me the Spanish budget and a red pencil, and I will reduce the deficit to zero within a week. I accept getting paid in government bonds.
What terrifies me is that everyone in Spain seems to have given up and just looks for excuses. It is irresponsible to dismiss as alarmists those who alert of the gravity of our problems. In fact, those who continue to say that “we are on track”, “we need more time” and thinking that this crisis is temporary are doing a huge disservice to the country. The VAT and tax increases will not be “absorbed by companies without affecting consumption” because corporate margins are at bear minimums, and we saw that consumption does fall as in 2010 with the previous VAT increases.

Has Spain given up?
The market does not “put pressure on Spain.” Investors do not buy because the risk of default is too high. Just look at the number of contracts traded on Spanish debt. Less than 40% compared to historical levels.

From a market perspective, there are three issues that concern me tremendously, issues that differentiate us from Italy, and unfortunately place us in the same risk as Greece or Portugal, but with a much larger corporate debt:

-Spanish governments always focus their economic measures on revenues (taxes). 61% of the measures adopted so far are expected increases in fiscal revenues.

–The cuts are not real cuts, but slowdown of the increase in spending. I read that the changes in the implementation of the Dependency Law “will allow a slowdown in cost increases estimated at about 3 billion euro”. I repeat, “a slowdown in expenditure growth”. Not cuts.

-Even with the new measures deficit is set to be around 6.5% in 2012, and the government continues to listen to advisers who say that everything will improve next year, as exports will help the economy and they need time to carry out reforms. It’s not true. The economy will not improve in 2013, nor will Spain export enough to cover the structural primary deficit- a key difference with Italy. And no, we have no time.

The perception that this is a temporary issue that can be sorted out increasing revenues is a huge mistake similar to that made by those who said in 2009 that “the worst of the crisis is over.”

¿Full bailout? No thanks. The example of Greece, Portugal and Ireland
We have seen this week a disastrous debt auction which, at the close of this article, has put the 10-year bond touching 7.2% and the spread to the Bund at 610 basis points. And I hear voices crying out for a full bailout and the ECB buying bonds as a great idea.

However, a full bailout does not involve anything positive. Do not expect an intervention to dismantle the bloated regional governments or to encroach on political spending. Moody’s had doubts on Thursday that Spain has any real chance of taking harsh measures on the regions. In fact, the Budgetary Stability Law itself establishes “hard” corrective measures that involve publishing a report and s written warning to the President of the region. Hardly agressive.

Intervention? Once the 10-year bond is up to 7% …
Unfortunately, the bailout process – including the “placebo” effect of useless massive purchases of bonds by the ECB- neither solves the crisis, nor calms markets, nor lowers bond yields unless the economy returns to competitiveness and political spending is slashed. Interestingly, political spending was not touched at all either in Portugal or Greece.

Greece and Ireland acted immediately and asked for a bail-out. Portugal took over five months to officially request one. In all three cases, the ten-year bond soared to 8 to 8.5% when the bailout was requested. 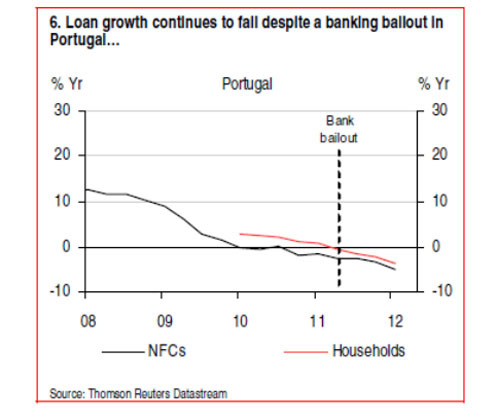 But once the bailout was in place, ten-year bonds just kept rising and the rating agencies downgraded the three countries to junk status. None of the countri

The few debt issues in Portugal and Greece were meagre 3-6 month paper, and Ireland was only able to return to the market almost two years after the bailout also with short-term paper, and that was after cleaning aggressively its banking system. The Portuguese 10-year bond is today at 10%, and the Irish is still at 6.3%.es had access to the credit market.

The time from applying for pre-bailout to downgrade to junk bond lasted between four and ten months for the three countries mentioned. Today, none of the bailed-out countries has seen a recovery of credit to the real economy.

Stocks are not discounting a bail-out
There are no “defensive” stocks with “exposure to emerging markets” and “low PE” when a country is bailed-out. Stock markets in Portugal and Greece fell by 44% and 65% respectively, a collapse almost as large as the pre-bailout fall. And we must bear in mind that, despite the poor performance of its stock market year-to-date, Spanish companies are still highly leveraged, a 200% of GDP in private debt, which comes in many cases from IOUs of the state for unpaid invoices.

The effect of a bailout for Spanish companies could be much higher than in Portugal or Ireland because of the huge refinancing needs in 2014, accounting for almost 35% of all corporate bond issues in Europe in said year. Without access to credit markets, companies would be forced to do more asset sales, dividend cuts and dismissals.

And watch out for the “positive example of Ireland.” The Irish Stock Exchange is the only one that has “recovered” because its index is mostly comprised of net exporters with low debt, no utilities and hardly any listed bank (less than 3% of the index), ie almost no companies subject to the intervention of the State. And despite this, the index collapsed.

Bail-out means massive cuts
Do we want the ECB to buy Spanish debt? More “pretend and extend”. Pack and disguise. We did not learn from the past and the subprime crisis. 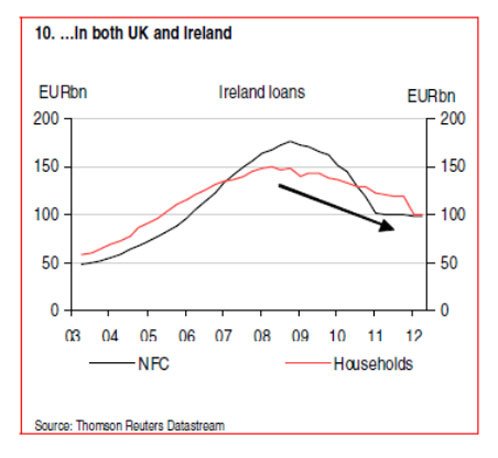 What has been the benefit so far of the massive purchases of Portuguese, Spanish, Italian and Greek bonds than loading the ECB with losses of 56 billion?, Nothing else but making the ECB the most indebted central bank … and no positive effect either on bond yields or the economy of the countries. “Watering the wine” to make it appear that there is more quantity in the barrel.

Want a full bailout? Not if we look at the example of our comparable countries. If you think that what we have now in Spain is “austerity”, when there is at best a modest adjustment, a full-scale rescue implies all social costs are axed. Severe cuts in pensions and the number of civil servants, raising the retirement age, much higher tax hikes and a collapse in GDP of between 3% and 3.5%. Do not forget that Ireland, the “good example”, suffered a fall in GDP of 7% in a year.

Internal bailout
What Spain needs is an internal bailout. If the government is right and there is “no money” and there is a national emergency then they have to be consistent and cancel the aid to banks, imposing debt to equity swaps to its debtors, cancel all subsidies and grants provided by the government (close to 14 billion a year), close all duplicative councils and pay politicians 50% of their salary in government bonds. Curtail spending now. Immediately.

I do not want a bailout because we do not need it if we cut spending. I do not want the ECB infected with Spanish bonds in exchange for giving away sovereignty because we can show that investing in Spanish debt is a good idea if we adapt expenses to income and stop calling for default and “odious debt”.

Spain can solve its problem, which was and is excessive spending. And then we will see the huge positive qualities of the Spanish economy, with excellent companies that can continue to export and can create jobs if we lower taxes and attract capital, not if we throw investments away.

We must not surrender Spain to the lenders. The ECB and the troika do not rescue, they do not support, and they do not donate. They lend in exchange for much larger cuts. And it doesn’t work, it only impoverishes. It has been proven by previous bailouts and all interventions of the IMF since 1978.

The red pencil to slash unnecessary spending is needed now. I provide the pencil if needed.