“The most scary thing is that even the Central government does not really know how large the size of the local government debt is”. – Hu Yifan

I mention it constantly. Massive debt accumulation generates greater fragility in the financial system. While global PMIs maintain their expansionary phase, we start to feel a certain level of deceleration. Fitch reduced its global growth estimates for both 2013-to +2.3% – and 2014-from +3.1% to +2.9% -, and the more cyclical companies that have posted results are cautious about the outlook for 2014. We should note that some economies are moving dangerously towards stagnation. Brazil , damaged by the populist policies of Rousseff , with soaring inflation, is poised to post virtually no growth in 2015 and India, with a growing current account deficit and high inflation in food prices, is a concern that I have mentioned before in this column.However, in between investor euphoria, the liquidity trap of monetary stimulus created by the eternal QE and imbalances in emerging countries, we had forgotten China. It is worth analysing some data. 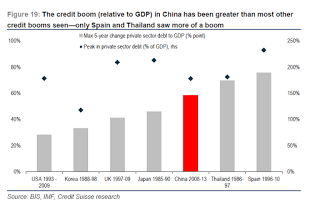 China continues to grow in a planned and optically spectacular way (9.1% annualized in the third quarter compared with the same period of 2012). The machine is doing ‘okay’ as long as the Government keeps it well oiled. It is the triumph of massive debt and central planning. Triumph? No, it is not . Even prime minister Li Keqiang, according to Reuters, referred to Chinese GDP as “man-made and for reference only”.

A model of high debt and central planning that Spain implemented with disastrous results in the decade of “debt does not matter”.

The Shibor (the Chinese interbank rate, similar to LIBOR) soared again last week, as it did in June. The interest rates in an excessively leveraged economy move back up again, despite past interventions of the People’s Bank of China, putting at risk an economic system where the amount of non-performing loans and the true amount of provinces’ debt are unknown.

Indeed, the Chinese provincial debt is not really known . Analysts’ estimates move between $2.5 trillion and $5 trillion, between 30% and 60% of GDP. In the United States, for instance, it’s less than 18%. This lack of transparency and information also shows how little control the central government has over the regions’ debt. Maybe that’s why it has approved the creation of regional bad banks, to try to reduce systemic risk.

The private credit bubble, according to Credit Suisse , is above 178% of GDP, 26% above the acceptable maximum. Total debt reached 200% of GDP. Remember Spain in 2007? It was close to 300%. And the level of spending-investment- is 12% higher than Japan at the height of its stimulus policy. Investment to GDP exceeds 48%, almost 10% more than the countries that industrialized more rapidly in the twentieth century. Of course, many people justify this level of investment by the need to modernize the country. However, in infrastructure, China suffers from overecapacity in many areas. It has the same highway density as the UK or the U.S.

All this credit bubble would not be a problem if Chinese companies were making fabulous profits and margins were spectacular, which would make the debt easily payable. However, 48% of the Hang Seng Index (comprising the largest Chinese companies) generated returns below cost of capital in 2012 and almost 30% did not cover financial costs with free cash flow. Does that sound familiar to those who heard “debt does not matter because most is non-recourse” in peripheral Europe in 2007?. Net margins of Chinese companies are the lowest (2.5%) of all emerging countries (average 6%). 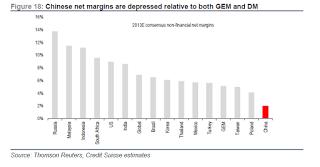 A real estate bubble uncomfortably similar to the Irish or Spanish. Real estate investment is 18.7% of GDP compared with Spain at the height of our bubble (22%) and Ireland (20%). The ghost towns that populate the Chinese geography are well known, but when growth has started to slow down, new housing construction has soared by again to keep the “growth by central mandate” plan, surpassing sales by 20%.

Aggressive borrowing process. Today China takes up to four times more debt than in 2010 to create one unit of GDP.

So what’s the problem? The arguments supporting or justifying the Chinese Model are: “You’re a scaremonger, this has been the case since 2000.” “While there is credit available and the government decides it, China will grow as much as needed, there is no problem.” “As long as the non-performing loan risk is concentrated in its banks, there is no contagion to the rest of the world.” “There is no bubble, only a moderation of growth.” “As long as China grows above 5%, the rest of the world is fine.”

Surprise, it’s the same we heard in 2007-2008 in Ireland or Spain. However, China has huge implications for global credit markets -as it’s the second-largest buyer of U.S. treasury bonds-, and for the anaemic industrial recovery process on which Japan depends heavily to improve its exports.

These data, as Goldman Sachs ,UBS and Credit Suisse point out in its excellent report “China: Curb Your Enthusiasm”, show an uncomfortable reality. The Chinese government is faced with two alternatives: to grow artificially leading to a financial crisis of unpredictable effects, or clean its banks of systemic risk, which unquestionably means to limit credit expansion, and thus stopping its growth-through-debt model.

Non-performing loans in China now exceed $88 billion. A figure that seems surprisingly low, as it is “officially” only 1% of total loans, compared with 9% in peripheral Europe or 12% in Spain, but the ratio is disguised by the huge amount of new loans, and the methodology to account as non-performing. But everyone, including the central government recognizes that the magnitude of the problem is worrying .

An entrepreneur friend of mine, when asked if he was considering expanding to China said, “China is like the lottery, you can win, but most pay more than they receive.” How long can the China bubble last? Years, or months. But today it’s not a matter of ‘scaremongering’ or unwarranted concerns. The combination of low margins, massive debt and economic multipliers plummeting alarmingly always ends up badly. How badly it will end depends on the decision of the Chinese government. Moderate the madness or head towards a financial crisis.

1 thought on “Careful with China”