This article was published in El Confidencial on November 4th 2012

“Your eyes are filled with flowers, but you have your nose and mouth to ignore the pain and tears. You want saints, roses and stars” Pau Riba (Catalan rock star, 1970)

Capital outflows from Spain have reached €247.1 billion. We keep saying it’s due to “fear of the euro break-up”, but we must not forget another added reason. The logical impact of uncertainty on secession. Hence why Catalonia is leading the net destruction of businesses with more than 19,000 companies closing per year.

This week several friends of different investment funds discussed the potential “black swans” of 2013. The three possible black swans in 2013, according to my friends, are: The American fiscal cliff – which we discussed here – the bursting of the debt bubble in Japan – that we analyzed here – and the secession of regions in Spain.

After my article “Catalan bailout and credit risk of junk bond “, I still think that in Spain we minimize the risks of predatory and exclusionary policies and the race to zero that state and regional governments are pursuing.

No single investor I know sees independence as a positive. International banks, as seen in reports by UBS, JP Morgan, RBS, Nomura and others, are warning their clients of the risks and are unanimously negative. This is because:

Politicians on both sides do their analysis on independence as a zero-sum balance or worse, as an expansive result, and that’s wrong. The balance is not zero, it is negative.

No investor sits waiting if the impact of independence on GDP is 5% or 10% or 15%. Investors leave. Goodbye. The benefit of this disaster is neither for Catalonia or Madrid. It is for London or New York, among others, while our politicians talk of “green shoots” and the joys of independence.

“An independent Catalonia might be credible in the long term, but major fiscal and political questions remain” “Additional costs of governing an independent state would reach 5.8% of GDP”.There are larger questions: Why should Germans support poorer Spanish regions if Catalans object?”

If we go to a secessionist environment in Spain it will have very negative effects for both the separated region and the rest of the state -and for the global economy due to the level of foreign-owned public and private debt of Spain and Catalonia in particular. There was not a single case in the past in which independence has not been accompanied by a significant drop in available credit, GDP or welfare. See the study on the independence of the Baltic states of European Journal of Political Economy . An average five years of recession. 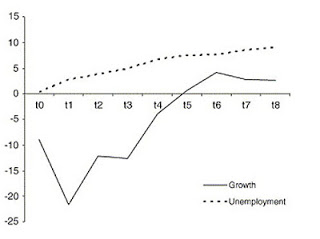 In the UK they say “hope for the best, but prepare for the worst”. Yet here separatists are selling the story that independence will generate gold for everyone and it is not true.When discussing Catalonia’s independence always remember: Public and private debt and large combined refinancing needs (€50bn in 2015) make Catalonia a unique problem. The independence of a region or a country can be defended for personal or cultural reasons –which can be discussed elsewhere- but not economic.

This is not to say that Catalonia would not be viable as an independent country. It would be, but in the very long term and after an unaffordable bill. This is what needs to be discussed. What cost we are willing to assume for independence.

At least in Navarre and the Basque Country they used to say “independence will cost us 100 years of poverty, but we will be free.” Honesty. Suicidal, but honest. Separatists promise to increase life expectancy –I swear they do-, increase pensions and that unemployment (750,000 in the region alone) will disappear if Catalonia is independent. And in Madrid we hear that it is terrible for Catalonia, but the rest of Spanish will benefit if separated because Catalan companies will migrate to other regions. Capital is likely to fly away. From both.The day after independence, the following risks ensue:

* The Ireland effect: the problem of Catalonia and Spain is that the public and private debt is unsustainable and crowned by a bloated government structure. Together and apart. Not tackling this problem before entering into a debate about national aspirations is suicidal. What my separatist friends claim that “it will be fixed later, when we are free” is false. The hypertrophy of the new state, the destruction of social security, pensions and services and the rise of corruption always soars after secessionist processes. And the citizens pay. 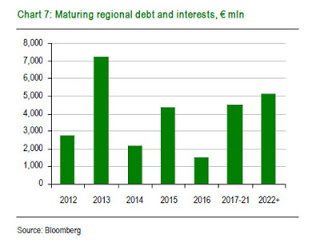 Catalonia spends 15% more than it earns. If independent, it would see lower revenues and expenses from the transition costs would rise. The Catalonia government, Generalitat, often compares itself to Ireland or Finland. Yet private and public debt together exceeds both. The “crowding out” effect on available credit, absorbed by government in detriment of the private sector and bank bailout costs is very relevant. It would be interesting to see why investors –who are not buying Catalan bonds at all today- would finance a government that spends 15 billion euro a year, 400 million a month in salaries and bills, with more than 150 licensed official cars and a “new country” where public spending is now 33.5 billion annually. 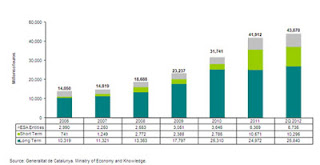 To give you an idea, the first industrial company in Spain, which is seven times the size of the GDP of Catalonia, pays about 700 million euro a month in salaries in Spain, including senior management, and has only seven licensed official cars.

* Credit access equal to Malta, Montenegro, Cyprus, Macedonia, Estonia … Where will Catalonia find 8-9bn of annual credit? Before independence the difficulty of Catalonia to access to the capital markets has been evident as shown by the issuance of “patriotic bonds” to retail investors to pay for current expenses. With mounting “transition costs” and large refinancing needs in 2013-2015 few investors would support a country, Spain or the severed Catalonia, which uses its financial resources to cover current spending and cronyism.

* Spain at Portugal level . In the rest of Spain it would be the same. The country would finance itself with short term debt and small issuances, deepening the crowding-out of credit access of firms and households. The multiplier effect would be at least unaffordable.

* The Macedonia effect: Macedonia is an independent state that is banned in the EU by Greece. If Spain were to veto Catalonia, it would be an independent country with a currency in freefall. Revenues would plummet, Catalonia and some of its companies and banks –despite large diversification- would have to default on its debt, sweeping away the debt of the rest of Spain as well, as it includes some guarantees to Catalan organizations.* The Estonia effect: Say goodbye to the much trumpeted welfare and social rights. I am surprised reading that independence would improve pensions. All countries that have achieved independence, and among them many are rich in oil and gas, have seen their pension and Social Security systems suffer or collapse. The effect on Spanish government debt would also be devastating, sinking Social Security and pensions, which are up to 80% invested in sovereign debt.

* The Azerbaijan effect : one of my colleagues, who has seen a generation of impoverished countries of the FSU and Baltic regions lets me give you an example of what happens after independence. The political plunder and corruption soar further. “Did you complain of cronyism and corruption? They increase. All for the sake of a GDP decline for five or ten years and then “grow” from a poorer base. ”

* The Scotland risk: David Cameron has said it clearly: “take the share of the UK debt, but not the currency.” UBS in its report “Can Catalonia Leave? Hardly” estimates that the debt of Catalonia would “become 78.4% of GDP after absorbing its share of the Spanish debt”. Even if this were not the case and Catalonia decided to declare its share of state debt as “odious”, the annual deficit would exceed the current 3.7%, because the alleged “fiscal deficit” would be spent on more than covering the new-EU NATO costs, new state structures and the increased cost of debt, which would be around 10% just extrapolating the risk premium of the current Catalan bonds. 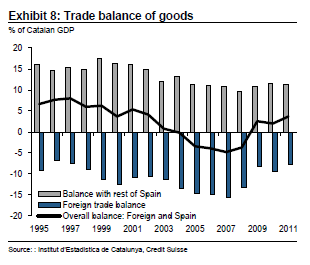 * The Wales effect: if Catalonia declared odious its share of debt of the rest of the state, it can say goodbye to transfers, endorsements, business relationships and fiscal deficit balance. When nearly half of the “exports” of Catalonia are to Spain, a very normal reduced trade between the two parties implies a fall in GDP of 10-15% in Catalonia and 2-4% in the rest of Spain, and the debt of the two would skyrocket and solvency would collapse.

. Czechia and Slovakia? Please…. That was an agreed and mutually beneficial split, not a “try to escape from debt and accuse of stealing” subterfuge. The debt (public and private) of Catalonia and Spain make the comparison simply ludicrous. Slovakia holds less than €34bn of outstanding debt. Catalonia would have €43bn even before it adds the already received transfers (€5bn), its share of Spain’s debt (c18%) and the costs of transition.

Credit Suisse in its very solid report “Catalonia’s Choice” states:Montenegro? Does Catalonia want the access to credit of Montenegro (€1.03 billion to 2024) with €140bn of maturities (private and public) in next years?.

“But Catalonia is not self-sufficient, it needs Spain when it comes to trade. Although at 14% its French neighbor accounts for the largest share of Catalonian exports, ten out of its fifteen key trading partners are Spanish regions. The latter account for more than 60% of its total sales. Although Catalonia has steadily exported more goods abroad, its trade balance with the rest of the world remains negative to the tune of nearly 8% of Catalonia’s GDP. Catalonia’s total trade balance, which also includes services, has only been in surplus thanks to its trade with Spain throughout the last decade.”

The numbers are absolutely atrocious for both. It is not a zero sum. Here two minus one equals less than one, because politicians do not consider the impact of capital flights, the impact of “crowding out” of the states and the loss of access to the capital markets.

The fiscal deficit that Catalonia claims –although since 2009 it was a fiscal surplus– would be spent on creating more state structures, pay to the EU and NATO and to cover the increased cost of debt.

Look at the Catalan bonds, despite recent state guarantee and bailout, and the optimistic figures given on the possible independence. They are still trading at a risk premium to the Bund of about 900 basis points and with an average of 16% discount for the 2015-2016 maturities. This does not indicate any kind of institutional credibility. 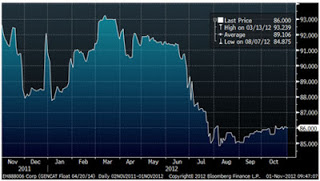 Spain after Catalonia independence would find it difficult to have a deficit of less than 8%. Short and Shorter.

The problem of Spain and Catalonia is the waste of scarce resources, ‘political cronyism’. But independence does not solve that. It increases it. Think of “emergency committees” –spending- “assessment of bilateral relations” –more spending- and unions duplicated throughout –more subsidies-.  A country that has today 600,000 more public workers than in 2001, that employs 400,000 politicians in different areas, with 4,000 public enterprises hiding €50bn of debt…

Spain must attack this wasteful mess before deciding what model of state it wants, and the example of England and Scotland can be a good starting point.

I leave you with the words of Marc Vidal: “We are in the hands of people who have not ever set up a company, who have never paid a payroll of their own pocket and that go to work when they want”.

We all want a more efficient management of resources, a taxation system that is closer to the paying citizen. This requires independence, together as a country, but independence from the monster that engulfs everything, the excessive public spending in a bloated political structure, subsidies and cronyism.

And my article in The Commentator:
http://www.thecommentator.com/article/2095/an_independent_catalonia_would_be_bad_business