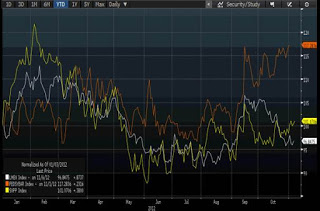 Let me start with some stats from Mr Richard Grey (you all know him as Ronnie) that I found very amusing:

“The US election is said to have ‘cost’ US$6bn (up c7% on 2008). This is seen by many as terrifying – and in some cases repugnant. However, less than half of that was spent on the actual Presidential election, The sheer size of that number is blamed upon a combination of the media-obsessed political classes and the rise of super-Pacs – but it is worth remembering that the US has an electoral college system to ensure that the smaller states are not swamped by the bigger ones in a popular vote. So there were, in effect, 50 separate Presidential elections (one for each state) across an incredibly broad political, geographic, economic, religious and ethnic spectrum. In addition, the figure compares to a monthly spend by the US of cUS$6bn on Afghanistan, the cUS$7bn America spends each year on ‘potato chips’ and the cUS$8bn spent in the US on Halloween celebrations! At cUS$18/per American perhaps it is not such a big number given the size and complexity of the US political system ?”

So what is my first reading from Obama’s victory? The Ben keeps his job and his QE Put is in full strength for the duration of his next presidency…I am not sure when the market will realise that but there are currently some things that do not stack up, check the graphs below highlighted to me by Krusty (Sorry Alex). The chart above shows the YTD normalized move in the SXPP

Until the election the gold price was pricing in the risk of a tightening to the money supply (or increased fiscal discipline) BUT with an Obama victory Gold has ripped (not to mention it was becoming a more consensual short). What is confusing to me is that we have had the big move up in Gold with a broader sell off in equities. If you subscribe to the view that global equities have been largely supported by the co-ordinated central bank action in expanding the monetary base (which I do AND the Fed5Year is pricing in) then this dislocation does not make sense. We are buying upside here through in Dec on the SPX and selling some of our Nov GLD call ladders to finance it.

The explanations I’ve seen for the market sell off seem to be centred round ‘Duh… it’s the Fiscal Cliff’. Is that the same Fiscal Cliff that we’ve all been talking about since the Summer? Is that the same Fiscal Cliff that would still have to be negotiated with Romney if he’d won? I think it’s simpler. I think it was the consensus view that we’d got the elections out the way – removed another worry from the wall and that we’d squeeze into year end. This market has whipsawed the consensus all year and once again I think some of the weaker hands have been taken out. Are we talking our book?

We had our Wednesday morning trading meeting with Andrew Garthwaite and it was reassuring he had a similar view… albeit expressed in a rather more erudite manner! Here are the bullets (emphasis mine) 🙂

An Obama victory is believed by some to be negative for equities for two main reasons:

(1) Obama proposes to raise the top rate of tax from 15% to 39.6% on dividends (for those earning more than $200K a year) and from 15% to 20% on capital gains (both of these would be raised by a further 3.8% surcharge on investment income under Obamacare). If implemented in full, we estimate this would take c5% off our fair value of the S&P 500 (a third of the US equity market is owned by individual investors who earn more than $200K a year). If we assume that the market had priced a 50% chance of victory for Obama anyway, then this in isolation could take 2.5% off the markets. However, our Washington policy analysts Michael Williams and Joseph Seidel believe there is some scope for compromise on these proposals. They highlight that Obama has stated that the dividend and CG tax rates “will go into the 20s”, i.e. will be less aggressive than the official line suggests.

(2) The second concern is that Democrats are generally believed to be less business friendly (big government financed by taxation, more regulation etc.), with Republicans highlighting the cost of Obamacare for businesses.

However, we would highlight that even if it were true that a Romney administration would have been more business-friendly, there are two offsetting aspects: first, an Obama victory might make compromise over the fiscal cliff easier than a narrow Republican victory, according to our Washington policy analysts, and secondly an Obama victory makes it more likely that the Fed will continue to pursue a clearly dovish policy (thus an Obama win is consistent with slightly lower bond yields and a weaker dollar).

Wilmot AND the pessimism bubble

One of our other strategists had an interesting view this week. What we really have at the moment continues to be a bubble… but a pessimism bubble:-

“It feels particularly abnormal that such a large share of the world’s savings are now invested in financial assets with zero nominal returns or where prospective real returns are highly likely to be negative. And that in itself is a big difference from previous “bubble” episodes, since it is surely driven by fear of bad outcomes, not boundless optimism about good ones. If this is a safe assets “bubble,” then it is a bubble born of pessimism.”

All bubbles implode (even London house prices will eventually!) He remains of the view that recent cyclical data are fully consistent with a gradual bottoming out of the mid-cycle slowdown. And Wilmot was less positive on a prospective Obama victory:-

“First, rightly or wrongly, the immediate investor and business response to a Romney victory would probably be greater optimism about the future and a short-term jump in risk appetite. Whether that optimism would be justified in practice is not absolutely clear, but it would likely be a secondary consideration in the short term.
Confirmation of a second term for the president, by contrast, might excite the opposite reaction. But equally, there would soon be a strong set of incentives for the president and Congress to find some form of solution to the fiscal cliff conundrum. At least as far as we can tell, the real peak of uncertainty about the fiscal cliff issue has either already occurred, or is just about to.”

Either way tactical indicators could be a buy for the contrarian. 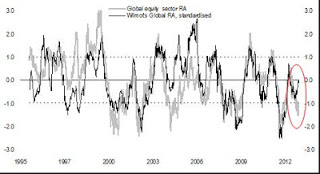 US and European equity sector risk appetite continues to be low (1.2 standard deviation and 0.4 std below average, respectively) 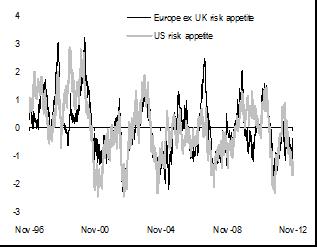 So while I am writing this piece (Wednesday) we should all be waiting for the Greek parliament vote. This evening the Greeks MPS are voting to pass the new fiscal and structural measures, and once again it is not clear what the possible outcome will be… it is fine that every 6 months Greece comes back to haunt us.

The difference this time is that no one in the press, TV or radio seem to even talk about it, have we forgotten the Greece can become a ticking bomb??? 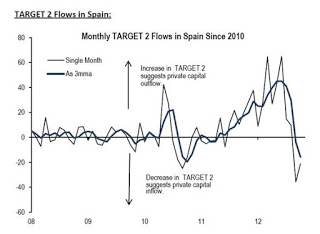 Let me assume that it will go through (It did, but with a rioting populace and a promise from Samaras that this would be the last austerity measures implemented) as I really do not like the other scenario…however this kind of uncertainty brings me back to my preferred trade. The Euro at 1.2844 makes no sense and at some point you will see parity, with vol at historical lows at 8 I have no doubts you buy puts…. We have DEC 120s… cheap crash for the book in my view.

All that said I am certain that Mrs Merkel does not want any more noise from Greece or any other European ahead of the elections so she wants to focus on domestic Germany, so I think she will be more generous than otherwise, but it will all be done behind the curtains.

And there is a lot of room for hope, Target 2 in Spain indicates that intra-European liabilities have moved into negative and therefore new inflows are coming into the Country, unfortunately if Rajoy is reading this – he will think there is no need to ask for the bailout…and I keep insisting would not it be better to ask for it when you are not on your knees???

1 thought on “Front Row: In Obama we Trust?”