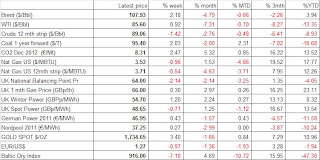 Despite all the intra-week volatility, which saw Brent reach the highs of $115/bbl and then retreat back the following day, both oil benchmark ended the week up (Brent +2.2%, WTI +0.9%). After more than two months of planned maintenance, the UK’s largest field and contributor to the Forties Blend, has restarted after repeated delays lasting over a month in total. This restart, however, has not been fully flawless and the field began producing between 140-170kb/d, significantly short of its optimal rate of 220kb/d. Elsewhere in the North Sea, Total’s Elgin field is unlikely to restart on schedule, and may be delayed into 2013 instead, the operator has said. This combination is likely to keep supporting Brent time spreads. In the US East Coast, a large number of refineries, terminals and pipelines have reopened after Hurricane Sandy related closures, although some not yet at full capacity. Phillips 66’s 238kb/d Bayway refinery in New Jersey is still out and is not expected to resume operations for at least another 2-3 weeks. Also in NJ, Hess’ Port Reading refinery restart date is not yet known as the operator will need all power infrastructure to be back on line before an estimated time-frame can be announced. Despite some ongoing terminal and refinery outages in the region, supply is normalising after the United States lifted the Jones Act, allowing products to be tankered by foreign-flag carrying vessels from the Gulf of Mexico into the East Coast market.Steam coal markets have staged a moderate recovery this week, as rock-bottom prices triggered some buying and short covering despite what is still a relatively poor physical demand situation globally. China’s Ministry of Railways has reported that railings on the key Daqin line to Qinghuangdao hit a new high of 1.31mt/day on November 6, up from 1.17mt/day in September and 1.01mt/day in August. Meanwhile, McCloskey China Coal Daily has reported that coal stocks at QHD have risen by 17% since 22nd October to a level of 6.06mt. At the same time, coal stocks held by six major power generators in Eastern and Southern China dropped 1.9% from the previous seven day period to 13.886mt. This is equivalent to 23.7 days of consumption, down 0.9 days w/w, however still high by historical norms.UK natural gas prices were largely flat this week. The market was up on Monday due to concerns about LNG availability given nuclear outages in Korea, but it softened through the week on better actual LNG supply into the market. However, expectations of a continuation of a cold remainder to Q4 have provided support for the curve around current levels.

US natural gas prices gained slightly after the market received a much lower than expected storage injection (+21bcf vs. +26bcf expected). Hurricane Sandy remains a net positive factor for natural gas demand as colder-than-normal-weather-induced heating demand has more than offset the power outages in the north-east so far. Furthermore, although power demand edged slightly higher during the hurricane due to the large amount of nuclear shutdowns, about 3.6 GW of nuclear capacity came back on Wednesday, while the rest should also come back to service by the end of the month. Although the boost for demand from nuclear outages is now smaller, the amount of power outages has also been reduced to 750,000 households from 8.5mn at the peak. This represents a very small amount of demand destruction that is by far outweighed by heating demand growth expected for this week.

CO2 was up 2.5% this week. The European People’s Party, the biggest group in the European Parliament, has asked the Commission to delay the set-aside proposal scheduled on 14th Nov until after the Parliament vote in April which would give the Commission the right to intervene in the ETS market. They said that the Commission said in a phone interview that it will not delay the proposal. The news highlights continued tension between the Commission and member states over set-aside. The EPP includes centre-right parties from almost all member states such as France’s UMP, the CDU/CSU from Germany and PP from Spain. The UK Conservative Party is not a member. If correct, this means that set aside proposals including how many credits should be removed will be released as planned on 14th of November. It is unclear when the Climate Change Committee may vote on the proposals, but the CCC could give its opinion on its 13th December meeting. This will be one of the key votes, and will be held on a Qualified Majority Basis. The main question is whether Eastern European countries, led by Poland, will form a blocking minority. should the set aside proposals be passed, it should pave the way to higher CO2 prices which will be especially important for generators in countries where coal sets the electricity prices, such as Germany, the Nordic region and the Czech Republic.

German power prices were up 0.4% this week. Dark spreads continued to ease and are now at the lowest level since August. Nord pool was flat this week, as gains in CO2 were offset by continuing gains in hydro reservoir levels in the Nordic region.

Baltic Dry Index lost 7.1% this week, as the weakness persisted across all the segments. While the situation in coal markets described above explains the continued weakness in Panamax, activity in the Capesize segment has also been weak as the recovery in iron ore prices has reduced the China-international price arbitrage from its peak in early September.