(This article was published in El Confidencial on November 10th, 2012)

“Tonight, you voted for action, not politics as usual.” Barack Obama
“The American people responded by renewing our House Republican Majority …There’s no mandate for raising tax rates. ” John Boehner

For months we have talked about the risks of the fiscal cliff and we warned about the danger for almost a year, even at the Cotizalia Roundtable. This week McCoy analyzed the U.S. numbers after the elections.

On Wednesday I commented on Twitter that “for those who think Obama is good for Europe and Spanish companies, the illusion ends today.” The US is facing an economic problem of some 650 to 750 billion on December 31st. The “fiscal cliff” is of no help to Europe.

The fiscal cliff is the combination of large tax increases, spending cuts and cancellation of deductions that would be implemented on January 1st, 2013 in the U.S. if Congress does not intervene and that would be a negative impact on the economy of some 750 billion dollars, 5% of U.S. GDP, according to Deutsche Bank, Barclays and Goldman Sachs.

If the U.S. fails to reach a tax deal between Republicans who control Congress, and Democrats, by January 2nd, 2013 the U.S. budget will be sequestered, ie the tax increases and cuts will be forced by law. Do you really believe they are going to shoot themselves in the foot and “not negotiate”-let’s not make a deal, as Krugman demands ?

The greatest mistake the new administration the new Obama administration can make it to “Europe-ize” and cover unsustainable public spending with taxes. Will he? Not entirely. Despite the calls for more government spending, the US still relies heavily on individual liberty and private investment.

All analysts assume that in February 2013 there is a risk of exceeding again the “debt ceiling” of the United States. That limit cannot only be covered with tax increases, as some claim, because the economy would plunge 7% according to Morgan Stanley.

“When even if you increase taxes by 100% you don’t solve the deficit, it’s not a revenue problem, it’s spending”

The problem in America is not revenue-that is partially solved with the expiration of tax deductions-, but overspending. A public expenditure, which, adjusted for inflation, was the highest since 1951 during the first term of President Obama (data Office of Management and Budget).

Are you optimistic that another round of easing “fixes” everything? Then go on vacation until February because negotiations are likely to stall.

All patches to mitigate the impact of the American fiscal cliff-pull through printing and simultaneously increasing U.S. debt, have the effect of weakening the dollar, and kick the can forward. The magnitude of the U.S. problem would be partially disguised by focusing on the poor prospects for Europe. Less exports, a rising euro and less capital available to finance our massive debt problem, an additional 3 billion European debt accumulated in eight years.

“The race to force defaults on fellow country clubs is on”

Obama is not crazy or going to turn the U.S. into an equivalent of France, where the state accounts for over 54% of the economy. Neither will nor can. Turning back on his delusions of a subsidized green revolution has been a great decision and as a result today the U.S. is closer to energy independence, paying oil and gas prices that are 60% ​​and 20 % lower respectively than Europe.

But above all, Obama is not Santa Claus for Europe. The U.S. know that more debt needs to be attractive to investors. And when we talk about so much new debt, one of the key strategies -as it has always been in debt markets- is to highlight the risks and deficiencies of competitors. Europe, with 1.3 trillion of debt requirements in 2013 is going to make that process quite easy, as its economy weakens and debt balloons.

The debt crisis is an economic pulse, as the Cold War, it is a race to see “who loses first”, not who wins.

I’m convinced. The crowd-out on the U.S. bond market will expand the European crisis. Because contrary to what spending advocates think, the available capital is reduced, not “despite the printing of money” but precisely because of it. Central banks seek to push investors to riskier assets, but they respond by reducing volumes and investments. 20% decline in 2012, a further 7% from September. They take risk, yes, but put less chips on the bet.

– Velocity of money is collapsing 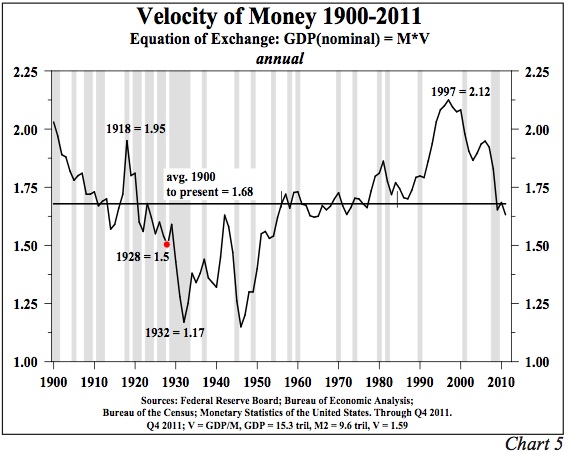 The distrust is such that the “shelter” is the least bad. And “less bad”, remains in the credibility of Anglo-Saxon countries both from an institutional and legal certainty perspective, but also in trade. In Europe we pat ourselves in the back while the debt load increases and we lose the opportunity to compete on margins, not volumes. We prefer to be fat than to be strong.Obama, Bernanke, Merkel or Hollande know this. Institutional credibility is everything in the debt market. And  printing money without private institutional financial support, the pyramid falls. Europe’s mistake was to think that between them they could solve everything without external capital. The U.S. success in this race is to support foreign capital-receiving foreign money, investors, with open arms. Not repel it. Despite all we want to criticize either Democrats or Republicans, the difference with Europe is abysmal: trade against protectionism.

We know that the United States can carry out another kick forward because 80% of global transactions are done in dollars. The euro is a toy. When I hear “shortly we will see oil transactions in euros” I roll my eyes. I’ve been hearing it since 1999.

“Reagan did it with missiles, Obama does it with a smile”

In the United States they know that behind the printing of currency and adding debt there is a strong financial private sector that has to support it. The Fed is nothing without private support. Here in the European Union, we are making the same mistake the USSR made with Reagan. To think that we can manage alone. And sorry, but in the U.S. the game has already been won. Especially if the European countries, in the heat of the probable American stimulus, decides to emulate. It is the bait that leads to death. It is the same mistake that led to the collapse of the USSR, entering a race Europe can only lose, only now without missiles, smiling and singing “Signed, Sealed, Delivered.” Germany is right, because they know that Europe imports inflation, the U.S. exports it. More debt will make Europe weaker.

Let’s not copy. I always say it. I have less debt than Donald Trump which does not mean that I can or should get into debt like him. Europe and Spain will only strengthened if they get out of the spiral of debt, not emulating other risky behaviours that the Eurozone will not win either by trade or regulation and access to financial capital.

Austerity -real austerity, not spending cuts to maintain political costs-is the only way to strengthen. I showed in my article on the “internal default” Ken Rogoff’s study that proves that countries with less debt and less government spending grow.

“In Spain there is no fiscal cliff, just cliff”

And at home … The European Commission estimates that Spain will have a deficit of 8% in 2012, 6% in 2013 and 5.8% in 2014. Overall, almost 220 billion more of debt. Almost one third of the “fiscal cliff” of the United States in additional debt in Spain alone. Either we cut spending or we lose the race to see who “makes default first.”

We are not the United States. Let us not copy the bad, borrowing and spending. Let us copy the good, the energy, financial and business culture, institutional credibility and certainty. I know it’s preaching in the desert, but …

Note: the quotes belong to comments from managers in London and the U.S. on Wednesday after US elections.