This article was published in El Confidencial on November 2012.

“Inflationism will not solve the problem brought by parasitical relationships. The greater the entitlements state, the lesser economic growth”

If there is something that worries me about the possible and timid recovery of the Spanish economy commented in this excellent document from our colleague Ignacio de la Torre is to fall again on optimism, return to the vices of the past and not work to cut the umbilical cord of State-Financial sector-debt, communicating vessels of  exponential risk that have generated so much distrust in the markets.

“Public money belongs to no one”

The international press has shown some dramatic footage of the Spanish general strikes.Amidst claims to “forget the deficit”-more debt-, more social rights -debt-, growth policies -more debt- and stop paying -default-, I wondered why we are so selfish that we applaud when we spend the money of future generations under the illusory promise that “we will grow” and yet we rebel against the consequences of that waste.

The greatest hoax of the last decade was calling “growth” to “debt” and now calling “austerity” to “contained waste” As I have shown in my favourite chart below, growth in Spain, excluding the effect of debt, was very low (almost zero per year) during the bubble, and what we now call “austerity” budget restraint is only very timid cuts consequence the previous waste. 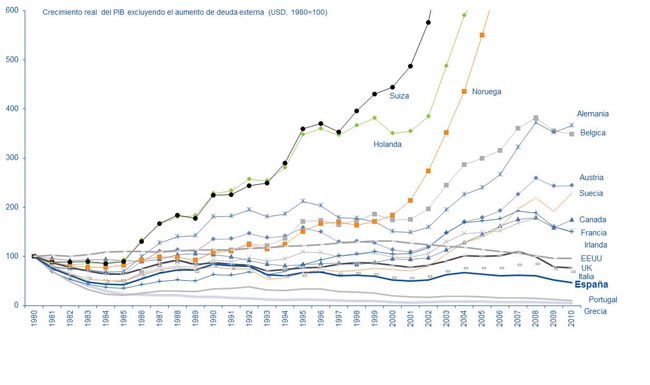 Think how good things would be today if we had called in 2005 a good general strike with a banner saying “don’t mortgage our grandchildren” when we multiplied debt by two.

The problem of debt is that it is a drug and that it blurs the lines of prudent spending or investment. And when it’s over, the “cold turkey” is worse than anyone imagined. We start justifying debt to “make growth investments” and finish wasting expenses calling them “social” as we have seen with 12 billion in subsidies and grants. We start thinking that growth will help pay the debt, then that it will be refinanced with more external funding, then by increasing taxes and eventually we go into default.

When even increasing taxes by 100% we would bot solve the deficit problem, it is not a problem of revenues, it is spending.

Since 2003, each new euro of debt has generated zero marginal productivity and, since 2004, created negative returns (source Goldman Sachs). It is the “debt saturation threshold”.We run the risk of going from debt saturation, which generates growth destruction, to tax saturation, which destroys capitalization and risk of bankruptcy.

Like drug addicts, we always think “I control”-my debt to GDP is lower than Japan-, and “I do not think this is going to happen to me,” -Spain is not Greece-, or the current “my colleague is worse “-private debt is higher than public debt-.

Let’s see. Private debt is freely contracted. Excessive private debt is repaid with capital increases, divestitures and free cash flow. If the company cannot pay, it goes into bankruptcy, sells its assets and liquidates. Public debt is imposed and mandatory. Public debt is paid back with more taxes and more cuts and if not paid, it ruins citizens. Important differences.

The biggest risk to recovery: the state-banks symbiosis

However, the public-private debt distinction and the free market, where bankruptcy and credit risk are key pillars to ensure the proper functioning of the system, are distorted when we add cronyism and perverse incentives.

Why do we bail out banks? Because in Spain banks have 34% of their balance sheet in sovereign debt, they buy up to 90% of all the issuances, and… who can not bear the loss of credit or a “credit crunch”? The Public Administration.

The graph below, courtesy of the Bank of Spain, shows the terrible impact of what the market is called “crowding out”-when the state monopolizes the available credit and access to credit sinks for families and businesses. Public Administrations (PAs) have been multiplying their access to credit while the other sectors (OSR, other resident sectors) lost access to funding. And let’s not forget those public companies that were created to accumulate 55 billion debt and now cannot be closed because they neither have value, nor can anyone assume its debt.

This is why banks are rescued throughout Europe. So the credit bubble will not burst for the government. And this would not be a problem if governments created wealth rather than paying current expenses with debt, but when they “invest” we witness another useless airport, ghost cities, idle infrastructure, unused high-speed trains, and the cost of that debt will be repaid with taxes and less credit.

Debt in itself is not bad. Debt is bad when it does not generate any return. And, as in any economic activity, there are some “social investments” that do not generate economic returns and are acceptable, but they cannot offset and surpass investments that generate returns, because otherwise we conduct a spiral of spending, which implies more debt and more taxes, increased impoverishment, less revenue, more debt and bankruptcy.

Public spending in Spain, according to Eurostat, is 45.2%. If we add regions, public companies and other government entities and removing transfers it is 50.2%. That percentage is unbearable when you have a cyclical economy and exports-focused services such as ours.

I recently saw the leader of the Spanish left party Izquierda Unida, Mr Llamazares, that claims that “austerity is criminal” on television. He said that he “would be a good minister of economy because (he) is very austere and saves”. However, what he wants for his family he does not want it for the state. Indeed, this man has done a pristine job managing his economy, adjusting income to expenses and maintaining a “social spending”-his family, educating his daughters- without debt. And in his household, 50% are “social costs” that earn nothing. Surprising. Every euro that he has earned has been wisely spent and saved. However, he does not want that same cash management for his country and wants markets to finance more and more debt. Because public money is free. Well, the market does not fund donations.

The risk in State funding

Let’s be clear. Without confidence in the State and in the financial sector there is no recovery. Therefore, austerity and balance of public accounts is essential for all: Credit, private growth and social rights.

Many people say that “banks make a bundle borrowing from the ECB at 1% and buying government debt at 5%.” There are several errors in that sentence:

The risk for social rights

How? Public institutions, social security, pension and others have huge amounts, in some cases more than 90% of its resources, invested in government debt. If the State continues to borrow and creating a hole of unproductive spending of which it cannot get out, default leads to the collapse of these institutions. That is why I do not understand when people demand to stop paying the debt.The risk of the State in wealth creation

The number of companies reporting losses or lowering their estimates for 2013 does nothing but grow. And more taxes means less investment. Investments in Spain from the Ibex companies in 2013 will fall by 35%.

I always talk about the so-called tax havens, which are wrongly called “tax paradises” in Spain.

There are no tax “paradises”, there are tax hells. What prevents us from making Spain a tax shelter?The country would collect more, would cover our basic services and people would enjoy more disposable income, consume more. The tax shelters serves to temper the greed of government tax collection. Where would you think that the marginal rate of income tax would be if tax havens they did not exist?.

Deficit as a big mistakeI do not understand how citizens demand more deficit and more debt when it has not worked. They complain of politicians’ mismanagement of public funds yet call for more financial resources for the bad managers?

The problem is that, as the abuser who tells his wife “without me you are nothing”, citizens have been convinced that the only solution to the problem of spending and debt is more State. And to do this first one must undermine the confidence of the individual. However, Spanish citizens are clever, and know that the country will emerge from this crisis, and if there are any green shoots they have been generated by the private sector, these small and medium enterprises that provide 70% of value added and employment in the country.

Wasteful spending and debt are always tolerated, but its consequences are not accepted. According to the European Commission, Spain recorded a deficit of close to 8% in 2012. Less than 1% of it is for aid to the banks. The deficit is expected to reach 6% in 2013 and 2014 , with a debt to GDP of 97.2% in 2014. Austerity??

Please note that to generate sufficient resources to cover the increase in debt of those predictions, Spain would have to raise 50% of all revenues from 2011 in the next three years, just to keep the State debt “unchanged”.

The good thing about planning to balance revenues and expenses is very simple. If we are wrong, and the country grows more, it saves, gets stronger and mitigate the impacts if the crisis returns. What all of us do every day. The downside of the policy of spending and closing our eyes is that when things get bad globally, there is nothing, and what is worse, we depend on lenders (the ECB, the IMF, whomever), that usually comes with demands that impoverish us and make us less free.

Austerity is not cool. It does not generate massive ghost airports, giant infrastructure projects, and huge fountains and bridges in every town.

Austerity hurts, but bankruptcy hurts a great deal more, and to many more people for much longer.

2 thoughts on “The State Attack in Spain”