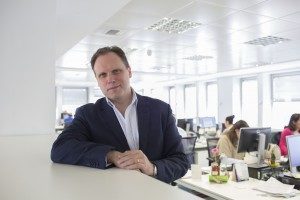 Central bankers are like “pyromaniac firefighters” creating crisis after crisis that they then try to solve, a hedge fund manager and economist has told Business Insider.

Daniel Lacalle, a chief economist at Tressis SV and a fund manager at Adriza International Opportunities, told BI in an interview that he blames the 2008 financial crisis on central bankers who don’t understand modern financial markets and are using tools from the 1960s to try and control them.

Central banks significantly lowered interest rates prior to the 2008 subprime mortgage crash, which encouraged people to invest in assets that were considered safe, like housing. It also enabled banks to offer cheap loans and effectively encouraged the housing bubble to grow and eventually burst, Lacalle argued.

“Central Bankers presented themselves as the solution to the problem that they created themselves. I call it the pyromaniac firefighter,” he said. “You create a massive fire and then you present yourself… to stop it.”

Lacalle believes part of the problem is that central bankers are using tools created for simpler economies of the past and unsuitable for complex modern financial markets.

The Spanish economist, who was named among the 20 most influential economists in 2016 by Richtopia, has worked with three central bank presidents and said they believe in the policies put forward but don’t fully understand how large financial markets are and the full effects of their policies.

He called for stricter technical monetary policy rules that would mean money supply decisions could only be made based on market metrics and not on the discretion of people working for central banks.

‘These policies completely obliterate what money is’

Lacalle believes that central banks are currently repeating the same mistake that led to the last crisis, creating the next bubble through the ongoing purchase of government debt (now at around $20 trillion). This has pushed up the price of bonds, inflated the value of financial assets, and injected excess money into the economy.

“There is a point where the perception of value from investors starts to crack,” said Lacalle, “The problem of these policies is that we completely obliterate what money is… By making money completely worthless, you basically promote mall-investment and indebtedness.”

The International Monetary Fund (IMF)warned in April that global debt has reached a record high of $164 trillion, or 225% of GDP. IMF managing director Christine Lagarde referred to the mounting debt pile as “clouds accumulating on the horizon.”Lacalle warned that the huge debt pile could result in economic stagnation or, at worst, a crisis worse than 2008. That’s because sovereign debt is a much larger percentage of the economy than housing.

“I think central bankers genuinely believe that bubbles created in financial markets are some sort of benign collateral damage,” Lacalle said, adding that the policies have been a “lottery” for investors but have pushed the rest of the population further into debt.