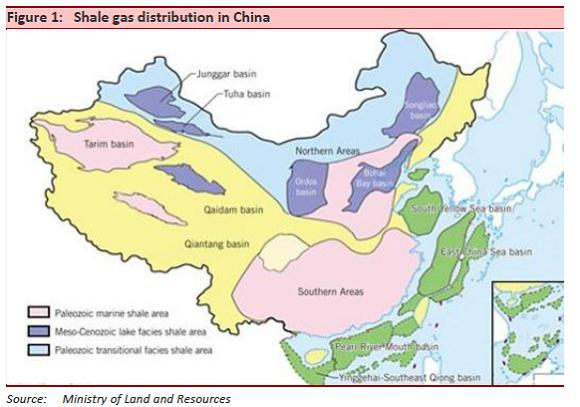 China is really pushing its shale gas resource opportunity. And this will likely be another nail in the coffin for renewables in the country.

The NDRC (http://en.ndrc.gov.cn/) has unveiled its strategic plan to explore and develop China’s huge shale resources. The plan sets a very ambitious growth and drilling plan, that will most surely find itself challenged by the lack of infrastructure and the technical issues, but nothing that will not be surmounted with a huge amount of international oil companies’ money and government incentives. What shale gas in China will likely do is have the same devastating effect  on coal and renewable energy growth (as we discussed here in “Has Cheap Gas Killed The Renewable Star?”) as abundant and cheap gas is likely to reduce coal demand and push back the subsidies to wind or solar.

China has the world’s largest shale gas reserves with the potential resources of 134.42TCM and recoverable reserve of 25TCM (exclude Tibet), according to the 12th Five-Year Plan for shale gas. This is mainly distributed in five regions: the south areas, northwest, north, northeast, and Qinghai-Tibet. 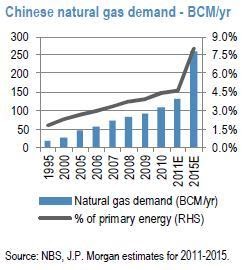 Inland shale gas covers an area of 20,000-25,000 sq km, mainly in the Junggar, Tuha, Bohai Bay, Ordos, and Qaidam basins. Sea-land transition shale gas covers an area of 15,000-20,000 sq km in northern China. Marine shale gas underlie 60,000-90,000 sq km in southern China, north China, and the Tarim basin. The south and the northwest have the most favourable reservoir conditions and are the areas of main concentration.
China’s production targets are 6.5BCM/yr by 2015 and  up to100BCM/yr by 2020. The country’s drilling target aims to 200 wells by 2013.
With Chinese gas demand expected by NDRC to reach 260BCM/year, shale gas would not make a massive impact on the country’s imports. Last year, China imported about 12m tonnes of LNG, equivalent to approx. 4.9% of global traded LNG and current estimates suggest that the country will import approx. 50m tonnes per annum by 2015.

However, the demand growth estimates of NDRC look optimistic, as always, and I would expect the figure to stay close to the +2-4% pa level. Even in that case, shale gas would not make a massive impact on imports assuming the 2020 targets as realistic, and in any case, I also find that shale gas production growth targets seem very challenging .

Lack of domestic technology for horizontal multi-stage hydraulic fracturing, deep gas deposits with complex geology, and high human population density, contributing to the difficulty of drilling for shale gas and lower economic returns. Significant capital investment and longer lead time to commercial production may result in slower capital recovery, while government incentives are not yet in place. Reserves are in central and west China, far from demand and more pipeline capacity and coverage is needed.

PetroChina so far has completed 11 appraisal wells in four blocks and four discoveries had commercial flow rates, while Sinopec completed five appraisal wells with two having commercial flow rates in three blocks and the most exposed to the resource growth vs capex, CNOOC, started preliminary work related to exploration, while Shaanxi provincial-owned Yanchang Petroleum discovered shale gas in three wells in Yan’an in the province. Agreements for future cooperation have been signed with companies including Statoil, ConocoPhillips, BP, Chevron, and ExxonMobil.
Shell signed a production-sharing contract with China National Petroleum Corp. to explore for and produce shale gas in China. The area covered under the contract is about 3,500 square kilometers in the Fushun-Yongchuan block in the SichuanBasin. Shell is looking to jointly develop more shale-gas resources with CNPC.
The Sichuan Basin has a well-developed network of natural gas pipelines. In 2008, Chevron assumed operation and 49% ownership (CNPC 51%) of the 1,969-km2 Chuandongbei block in the Sichuan Basin. Shell announced it and CNPC had jointly submitted a 30-year PSC application to the government, targeting the 4,000km2 in the Jinqiu region and this block is now under exploration for shale gas. Also, EOG Resources holds a gas PSC in the Sichuan Basin that may also be prospective for shale gas.
To achieve the 2020 targets, 1,200-1,500 wells will be needed. The cost of wells using domestic technology ranges from US$3.5m for a vertical well to US$7-8m for a horizontal well involving multi-stage fracturing. Just to compare, a horizontal well costs US$3.5-3.8m in the US.
Interestingly, China is also pushing ahead with its support for natural gas vehicles. Westport Innovations announced the introduction of China’s first natural gas engine featuring Westport high pressure direct injection (HPDI) technology. Based on the Weichai Power WP12 engine platform, the 12-litre engine features Westport HPDI technology which maintains the power and performance of the base diesel engine, but allows the replacement of up to 95% of diesel fuel with cleaner burning, less expensive natural gas.
How to play this?
. Equipment manufacturers and service companies, particularly the large US names who will benefit from the massive capex requirements to develop these assets.

. Resource plays: Careful as capex likely to eat away returns for a long time.