By the title you might think that my article might be centered in Keynes’ economic policy ideals towards taxes, but no… I know and I’m conscious that that would be a really interesting debate, and that many of you will enjoy reading it, and sooner or later we’ll have time to talk about that, but today I want to write about a more actual theme that doesn’t come from 70 years ago, and that nowadays is essential in all the economy’s minister desks, I hope you know what I’m talking about.

Lately this last two months, in the news or even in the day to day and into economic conversations, nobody stopped talking about corporate tax or even its effects and causes in the economy, but why? It seems like economists are really excited about it, and have reasons for it.

Recently, the Hungarian Prime Minister; Viktor Orban has displayed his intentions on decreasing the corporate tax rate to 9.5%, having the lowest one in the EU, followed by Ireland, which actually maintains its rate in 12.5%.

Let me tell you that Spain is not an example to follow in this case, and that today talking about it might be really boring, I like action, and action is that the USA will provide to the labor market with Trump’s intentions of decreasing brutally the corporate tax rate by more than 20 percental points in just one year… from its actual 35% to nearly 15% over the companies’ income.

Let me say that by reducing the global tax rate on income and in contrast to what many people think, this would help to improve the American tax system and rise the revenues of itself.

We shouldn’t be negative when we are told by the new director of the FED, that the highest corporate tax of the major powers of the world (USA’s 35%) will be lowered down to the OECD average 25%, or even to its Canadian partner rate- which is 15%, leading to greater innovation in all the sectors of the economy and will help to shift profits generally upwards.

Should be kept in our minds, that by cutting corporate taxes, the USA will be much more competitive within international markets, generating higher aggregate demand and benefiting the larger part of Americans and their wages.

Internally, into the country, the new lower rates will reduce the costs of production capital in many firms, mainly manufacturers, which will rise the investment levels into that particular market, at the same time it will contract market share from economies as the Chinese.

With higher money being in circulation in the USA, productivity will increase due to more incentive for labor and higher salaries for the jobs in the secondary and tertiary sectors, producing consequently much better standards of living in the mean term.

Secondly, we have seen able to see through experience how a lower tax rate on corporations will reduce prices of natural goods and materials, reducing business costs and freeing companies from their production expenses, allowing to increase supply in the market, as in the EU, where stock rates have risen by 6.5% over the last decade.

As we have previously mentioned, by lowering tax rates, investment and economic growth will be lifted in the economy, which will give place to greater wages for the human capital and improved working conditions for many, as we have observed that in the vast majority of developed countries, productivity is highly related to the final wages received by workers, and larger incentives lead to higher productivity of lab.

In case of decreasing the US corporate tax down from 35% to the 20% settled in the UK will rise over time full time employment by 2.8% in the mean term, generating 600,000 new jobs just in the first year, according to a study from the TAG.

But lowering corporate tax won’t be only beneficial for entrepreneurs and international investors, as it will also have many positive effects for the local population and low skilled workers.

Having a higher economic growth and an increased tax income will allow the government to descend tax rates also on income tax, which will provide workers with much more disposable income and purchasing capacity, rising living standards. 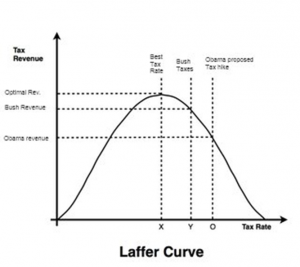 In conclusion, by reducing the tax rate to 15%-20% will make the economic growth of the USA to be boosted to a 3.3% extra added to the current growth rate over the next five years.

Workers will be one of the most benefited groups for this decrease in tax rates, and mainly in corporate, which will delegate on an increment in employment with 600,000 jobs being created just in the first and a half year of mandate, and wages of previously stablished employment will rise by 3.6% over two-three years.

Álvaro Martín is an international economy student. You can read his articles in Club de los Viernes´s website.