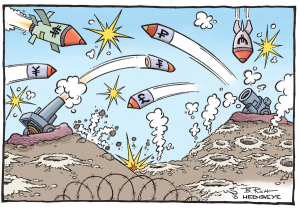 “From its creation in 1913, the most important Fed mandate has been to maintain the purchasing power of the dollar; however, since 1913 the dollar has lost over 95 percent of its value” James Rickards

One of the least talked about proposals of the future Trump administration is the one that aims to penalize with economic sanctions those countries that manipulate their currency … even the US.

The proposal is not entirely new, and has been defended by Republicans since 2014, but the novelty is to penalize monetary manipulation.

On the one hand, Republicans have two proposals, one in the House of Representatives Financial Services Committee -of 2014- and another, of 2015, in the Senate Banking Committee by which the Federal Reserve would be prevented from making decisions on interest rates and balance sheet expansion if they deviate by more than two percentage points from a predetermined Taylor Rule. Let’s explain.

If the Federal Reserve targets a level of inflation and employment for a level of rates and monetary policies, it would have to explain to Congress or the Senate why it changes or deflects the normalization when these targets are met.

Why? Very few representatives of the Republican party deny that the dramatic cut in interest rates led to a huge bubble that generated the 2008 crisis, and that prolonging the so-called expansive policies in recent years has generated another bubble in bonds and an excess of euphoria in financial assets with no discernible impact on the real economy ( read the results here )

The indiscriminate creation of money not supported by savings is always behind the greatest crises, and there is always someone willing to justify it as both a problem and its solution.

Add to this that the economists of the Federal Reserve and its chairpersons were all unable to alert or even recognize the risk of such bubbles (from Greenspan to Bernanke or Yellen) and you will understand why there is a growing body of politicians concerned about monetary policies that are always launched as if they had no risk and then justified with the lame argument of “it would have been worse.”

Of course, the Federal Reserve rejects such limitations. When the central bank becomes the largest hedge fund in the world under the premise that there is “no inflation” despite a massive bubble in financial assets, it is difficult to change the methodology of the entity. But after consistently erring on estimates, impact and consequences, it is normal that the Republican Party and many Democrats put the mandate of the central bank in question .

Carl Icahn, one of the world’s top investors and Trump’s newly appointed regulation adviser, still holds the napkin where he took note of the Federal Reserve chairman’s response to his question on whether they had gauged the negative consequences of the Fed´s monetary policy. ” We don’t know “, was the answer.

But I am especially interested in the idea of penalizing countries that implement devaluation policies of ” beggar thy neighbor ” after the currency war seen in recent years. Read here.

Several years ago, in 2009, I had the opportunity to chat at a meeting with the incoming US Secretary of State, Rex Tillerson, and he was already saying that the greatest threat to the world was the spread of currency wars.

Now, only a few days away from getting a clear picture of the entire US government team and advisors, Rex Tillerson, Mick Mulvaney and Carl Icahn are clearly against the policies of financial repression. Even Steve Mnuchin himself has often commented on the risk of inflationary policies.

But the US cannot prevent central banks from other countries from continuing to impoverish their citizens through devaluations and brutal increases in money supply … Unless they are fined for doing so. And that penalty can have dissuasive effects and, in addition, prevent the generation of larger bubbles that lead us to another financial crisis. It is no coincidence that Mick Mulvaney applauds initiatives like Bitcoin  and the depoliticization of currencies.

It is not about returning to the gold standard or anything like that. In fact, what this group of representatives of the Republican party demands – and in that they are absolutely right – is the end of uncontrolled monetary excess without any responsibility on its consequences. Rejecting a system that encourages bubbles and over-indebtedness under the excuse that “it could be worse.”

We do not know if these measures will be implemented, but I think it is important and healthy that the debate over the excesses of central banks is raised at government level in the world’s leading economy. Trump himself, who once said that “America can print all the money it needs,” has abandoned that ridiculous comment.

In any case, just as the crisis of 2008 ended the open bar excesses of some financial operators, it is time to alert that central banks´balance sheet cannot be used indiscriminately as if they were high risk funds to perpetuate the bubble , when the result has been more than disappointing. Recovering a little sanity, even modestly, will not hurt anyone. We shall see.